This gun was placed in the Sales Manager's office show case at the Smith & Wesson factory on February 4, 1947. While held by the factory in the show case, it was updated with new features as they were developed, such as the target hammer, target trigger and special grips.

In 1950, this revolver was removed from the display case and given to Assistant S&W Sales Manager Fred Miller, who placed this gun in one of the 1947 K-Frame blue fiberboard presentation cases. Mr. Miller then presented this revolver to Gil Hebard of Knoxville, Illinois, an important target shooter and a new S&W Distributor. The gun remained in the personal collection of Gil Hebard from 1950 until 1991. 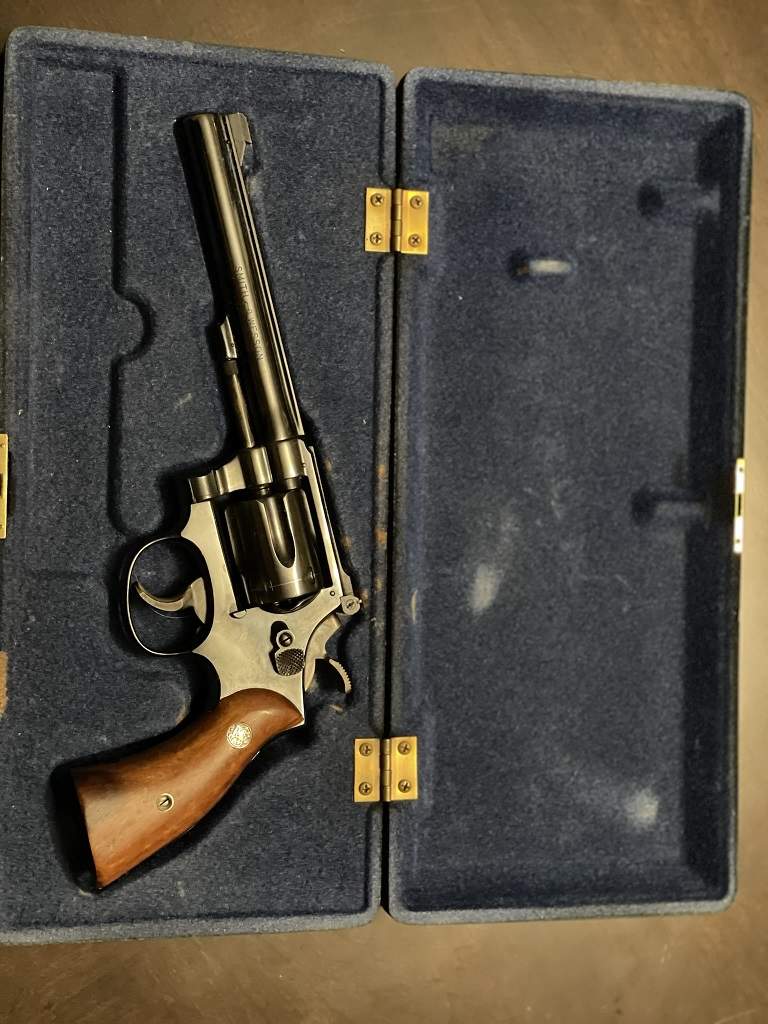 Excerpt from his Obituary - A lifelong Knoxville, Ill., resident, Mr. Hebard founded the nationally known Gil Hebard Guns in 1950 and operated it with his wife, Mary Elizabeth Hebard, who survives. Mr. Hebard was active in the business until mid-July when ill health confined him to his home.

Mr. Hebard was well-known in his industry for earning National Rifle Association competitive pistol marksmanship titles, achieved in the 1970s and 1980s. He was named to the National Rifle Association Hall of Fame in 1999 as Handgunner of the Year, and earned the Jurras Top 10 Outstanding American Handgunner Award in 1975. The champion shooter was also known for advancing the sport with many innovations. He authored articles about competitive target shooting and produced a reference for the sport, "Pistol Shooters Treasury" in 1960. Gil Hebard Guns produced annual catalogs from the 1950s until 2005. 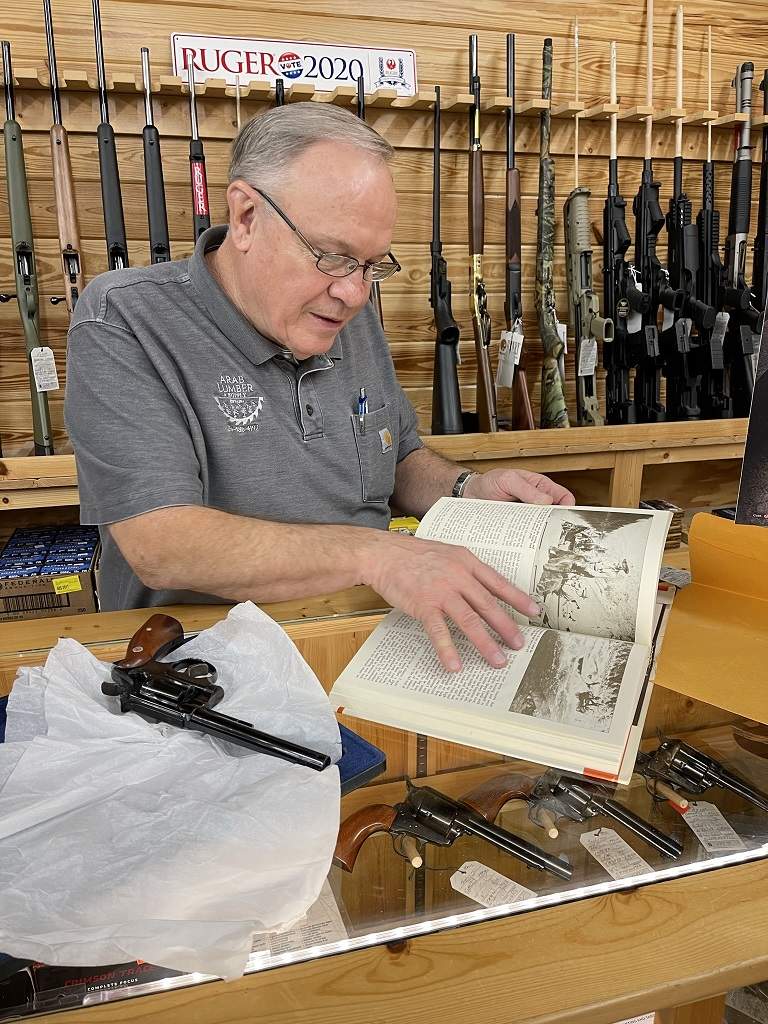 Everyone that reads my Blog recognizes Benny, my FFL guy

When Benny called me to let me know my gun had arrived, he told me he had an extra copy of Elmer Keith's book "Hell, I Was There!" in his library that he was going to give to me. Benny knows well that I've been a long-time Colt guy, and I think he is as excited as I am to see my newly developed interest in these old Smith & Wesson guns. Benny has always been a big Smith & Wesson guy. Not to be outdone, I pulled an old Belknap Hardware Blue Grass Barlow from my knife collection to give him when I went to pick this gun up.

In 1991, this revolver was purchased by Roy G. Jinks, Smith & Wesson Historian from Gil Hebard. The gun remained in Mr. Jinks personal collection until 2018, when it was sold at the Amoskeag Auction. 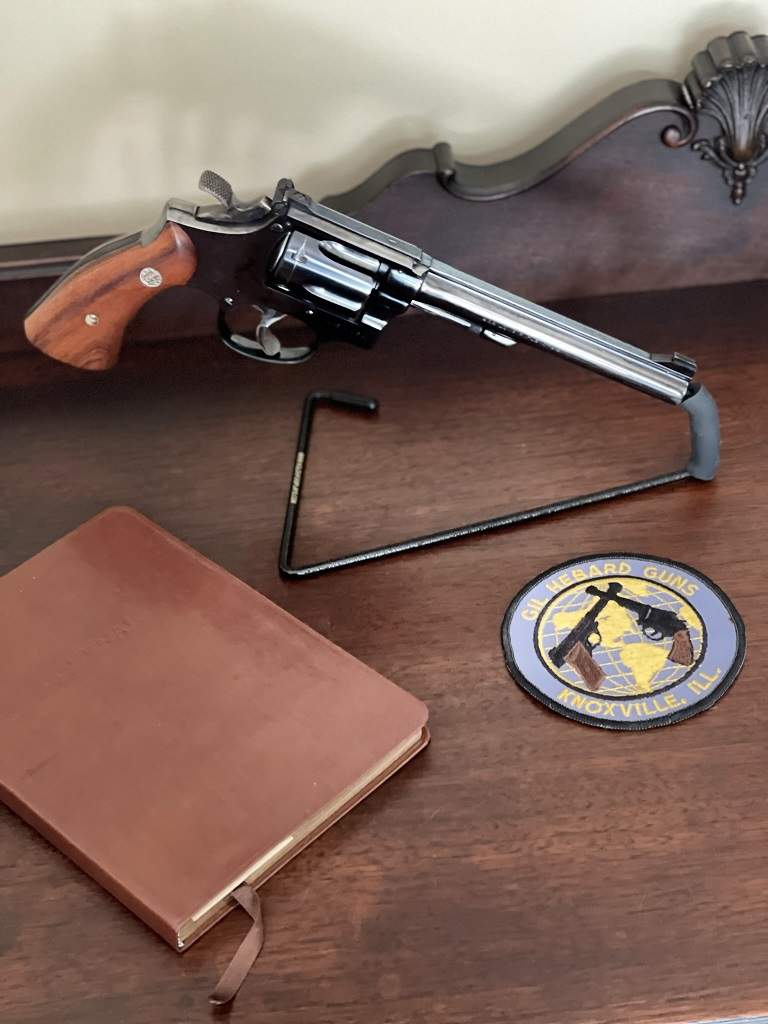 Description: Serial #K250, 22 LR, 6'' barrel with an excellent bore. This lovely revolver was the first production K-22 Masterpiece completed in 1946 and was used by the factory to showcase their K-22 line of revolvers. The metal surfaces retain about 97-98% original blue with light high edge wear, fine scratches and a turn ring on the recessed cylinder. 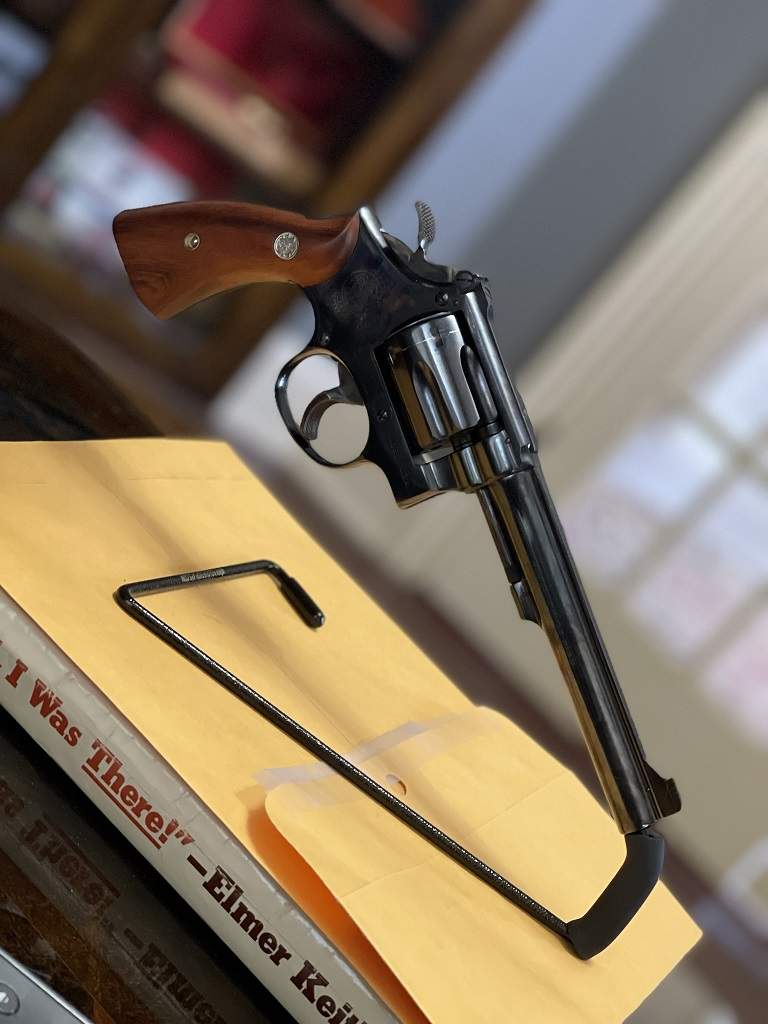 The .500'' target hammer and .500'' target trigger retain beautiful case-hardened colors with minor operational wear. The un-numbered smooth goncalo alves factory Magna grips with silver S&W medallions rate excellent. This gun features an undercut Patridge front sight, black blade micro adjustable factory rear sight and all appropriate parts are correctly numbered to the gun. Mr. Jinks informs us that this gun was placed in the Smith & Wesson showcase on February 4, 1947 and was regularly updated by the factory with the latest features as they became updated such as special grips, target hammer, target trigger, etc. 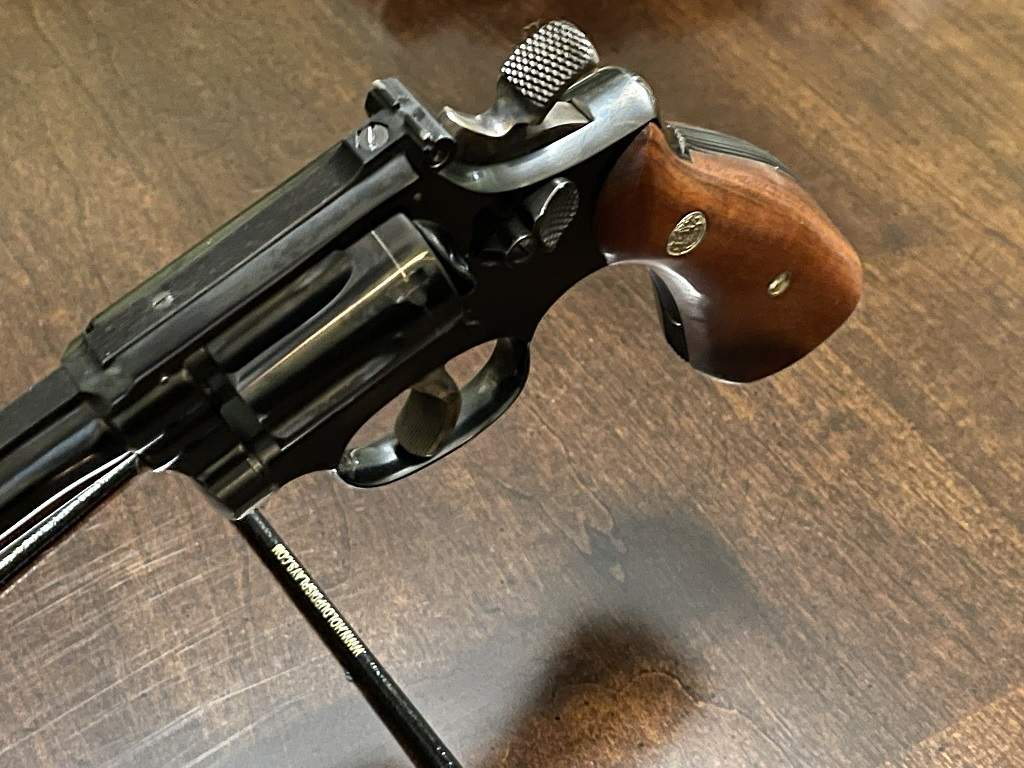 Ultimately, this gun was presented to noted shooter, businessman and innovator Gil Hebard by Smith & Wesson manager Fred Miller. The gun was placed in a special presentation case for the presentation. The case is made of fairly robust pressed fiberboard and the interior is lined with blue flocking. The base was pressed to French fit the outline of a Masterpiece revolver, the cover has the S&W logo pressed into it and it features brass hinges, brass sliding spring latch and metallic blue coat of paint. The case rates about excellent with scattered scratches, chips in the paint and other handling marks. 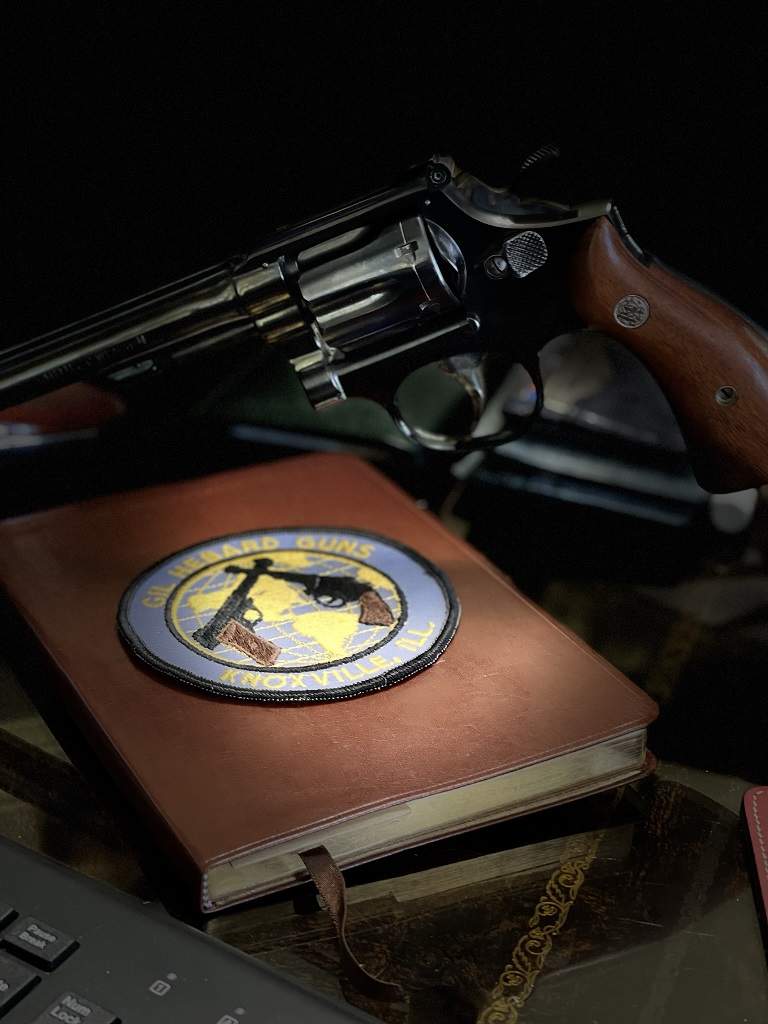 Mr. Jinks later bought this gun directly from Mr. Hebard. The gun has seen some light use and handling but remains in excellent condition overall. This fine gun was not only the first gun produced in 1946 it was owned by two of the greats of the firearms world and presents an extraordinary collecting opportunity. [Roy Jinks Collection] 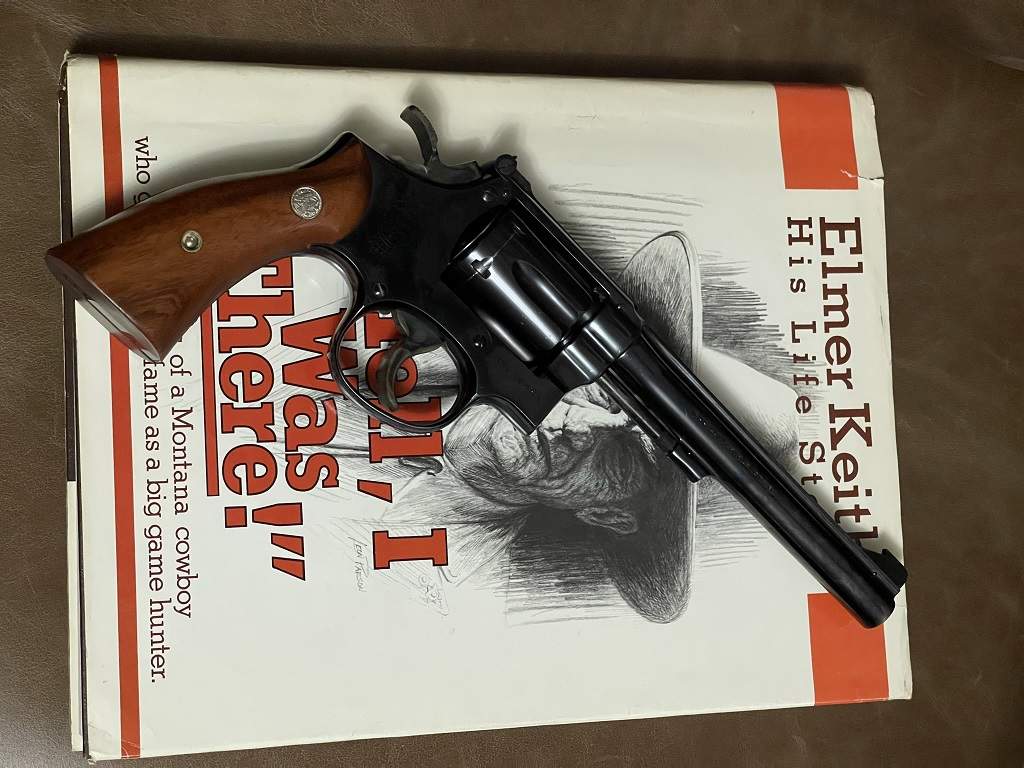 Thank you for the book Benny

In my quest to acquire a five-screw K-22 with the bright finish, narrow rib barrel, a target hammer and target trigger, I never dreamed that it would come in the form of a gun with such historical importance. And to top it all off, it is a gun that I can take to the indoor range and fire occasionally without fear of adversely affecting the value. 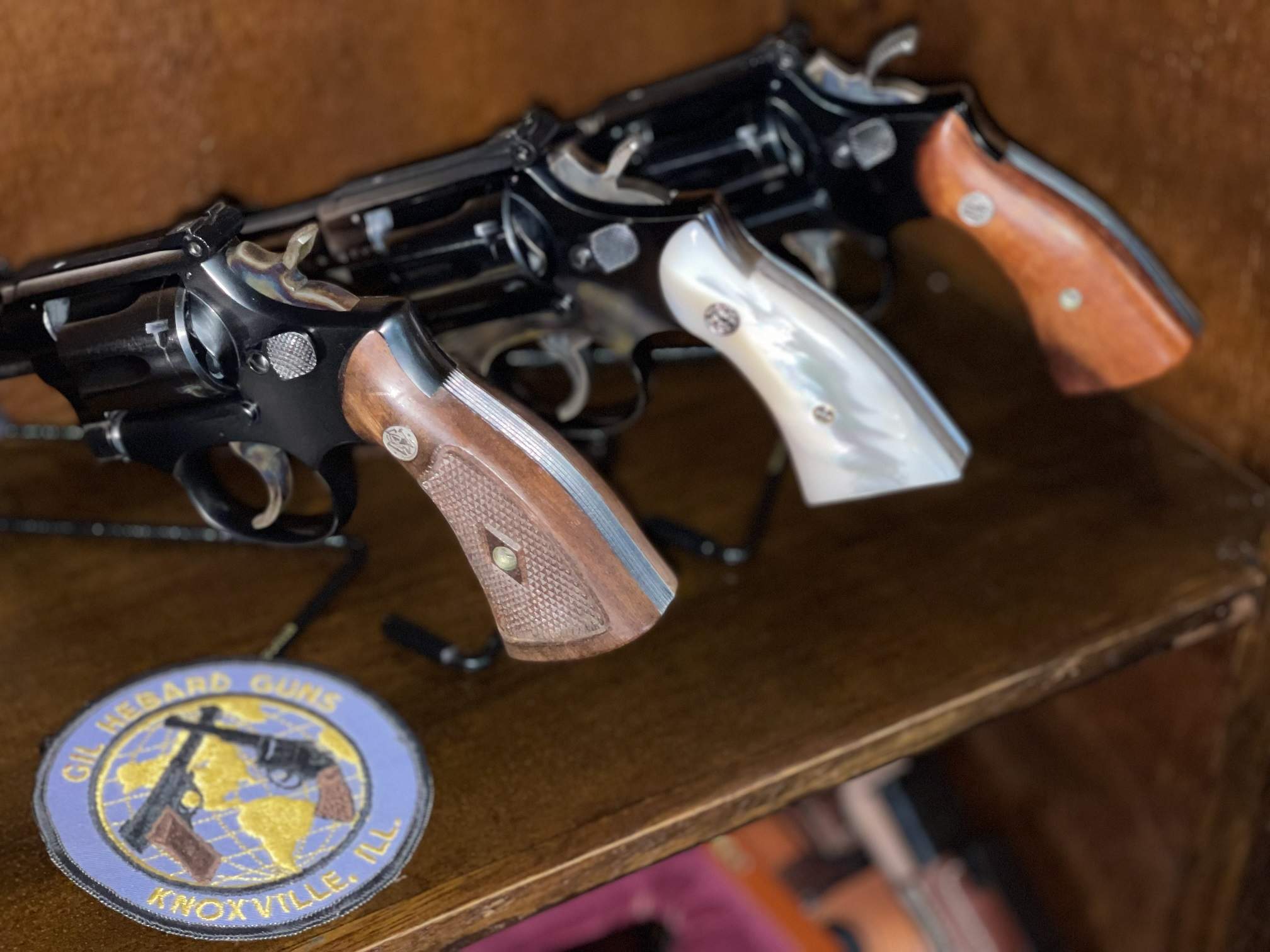 After studying the Third Model K-22 considerably last November, I knew that I wanted to build a small collection of the guns. But there were so many minute variations spread throughout its history (1946-1957) that I didn't know where to start. Since 2020, I have been downsizing my collection and I did not want to lose ground with the reduction in numbers. I love it when a 76 year-old gun has its history so well documented, that's very special, at least for me. I love history and this acquisition from the Baby Boom Period (1946-1964) has set the bar pretty high for the next gun I may acquire.

Conundrum may be more appropriate than Conclusion...

Today is January 23, 2022 and I have been actively downsizing my gun collection since 2020. Just recently, I placed 10 guns (5 long guns and 5 handguns) on consignment with a professional seller. I plan to post the results tonight. It was Christmas Day, December 25, 2021 that I bought this factory display gun. So if I sell 10 and buy 1, I'm making good progress, right? 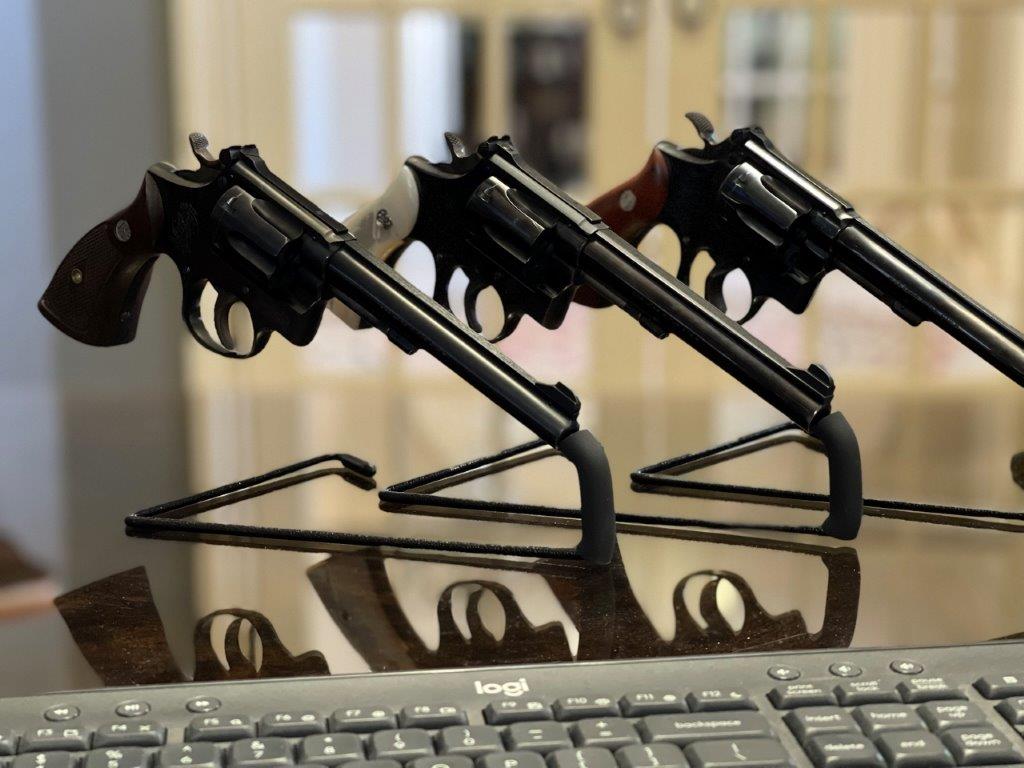 These three guns may be the ones I keep of the Smith & Wesson .22 target revolvers, unless another rare opportunity comes along. 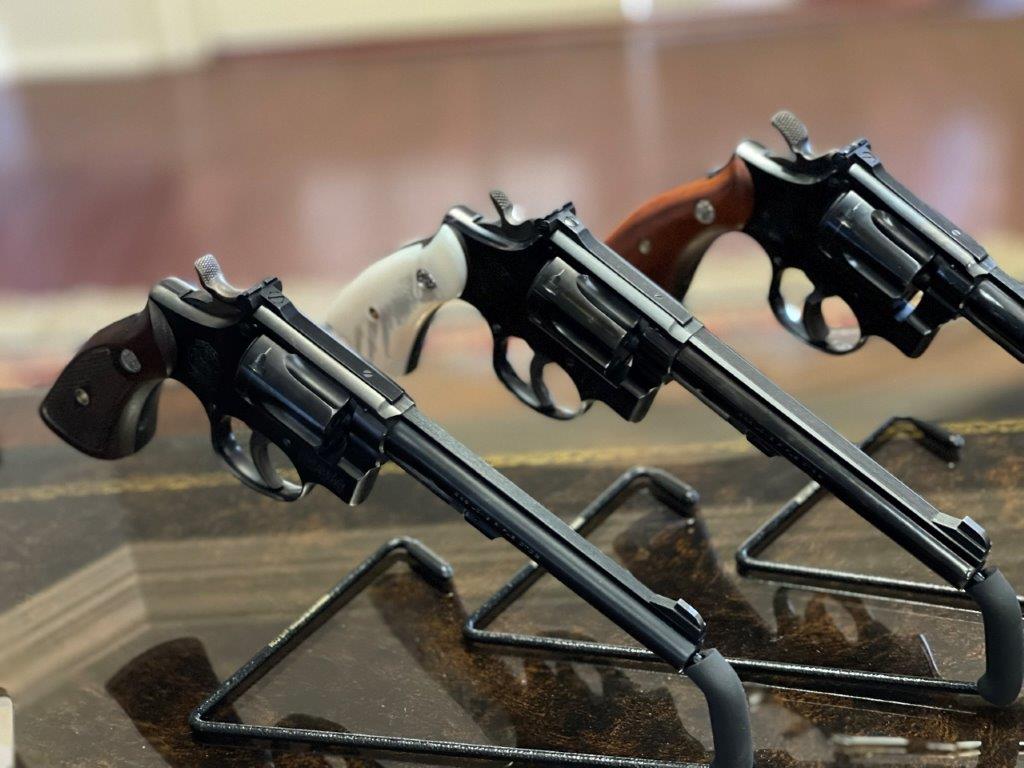 As I'm reducing the number of guns that I plan to keep and shoot, I'm trying to increase the quality of those few guns that I will keep and maintain. So while I was fretting over which guns to have in this group, my decision may have made itself, at least for now. 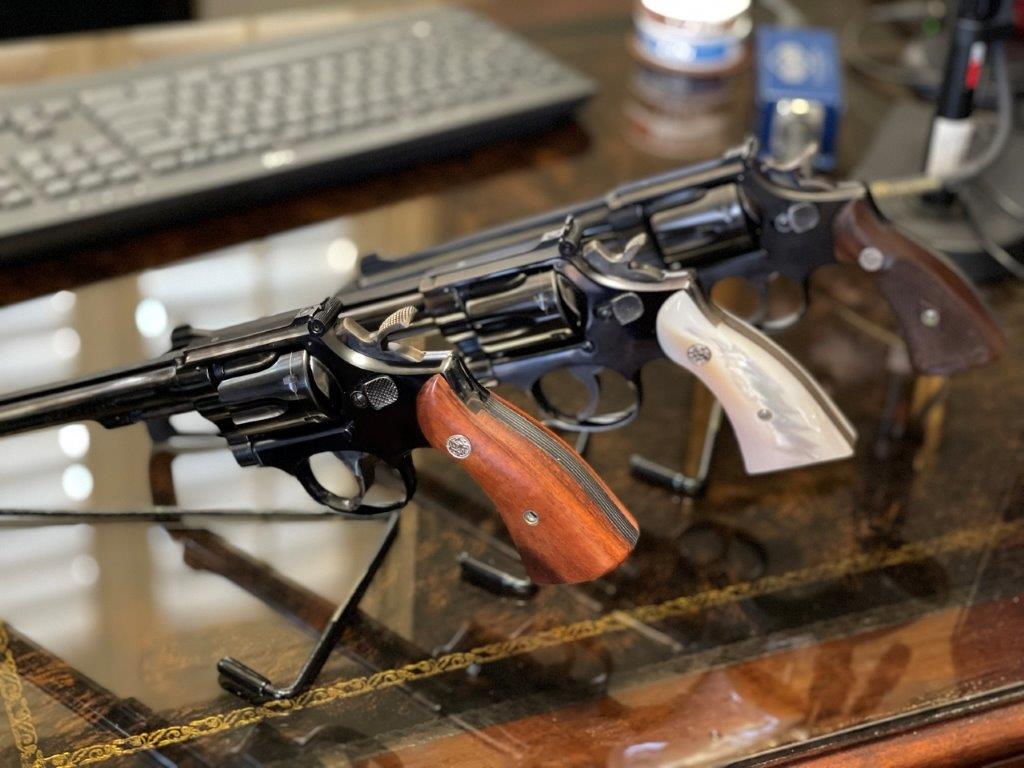 If you have an interest in these guns, you can find the Serial Number Table for the Smith & Wesson Third Model K-22 Masterpiece here. And if you are trying to determine if a gun is five-screw, four-screw or three-screw, check out the easy instructions at the bottom of that page. This is just my personal opinion, but you can't find a better class or category of guns to collect and shoot than the Post-War, Third Model K-22 Masterpiece. 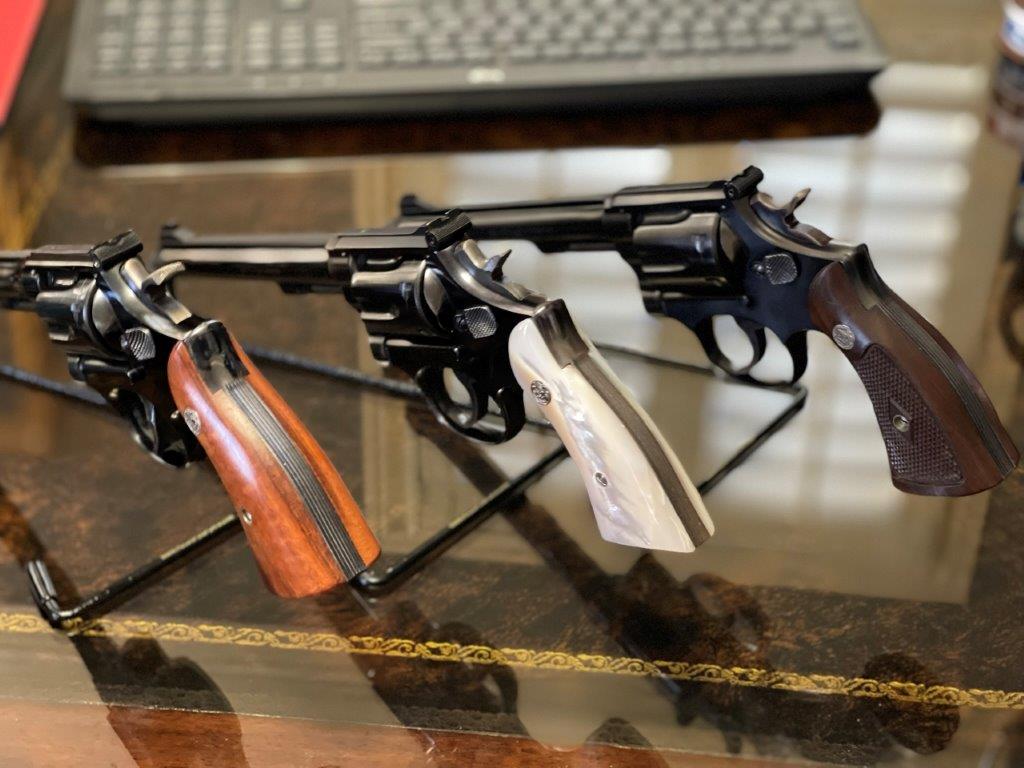 If the 10-gun consignment sale is successful tonight, I may add one more gun back, if I find something extraordinary. 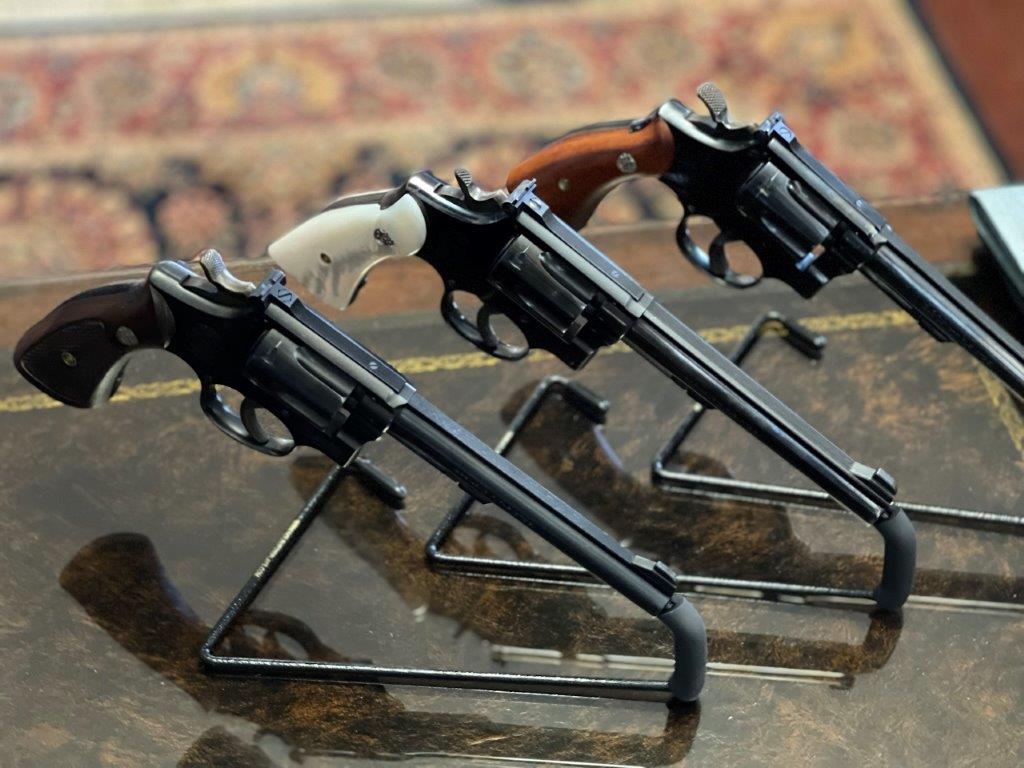