Smith & Wesson introduced the .38 Hand Ejector Model in 1899, which later became the M&P or Victory Model, then the Model 10.

The S&W Model 10 has been labeled the most popular handgun of the 20th Century owing to its 6 million units produced. The Model 10 is a six-shot, double-action revolver, chambered for the .38 Special. It has fixed sights and is built on the K Frame. 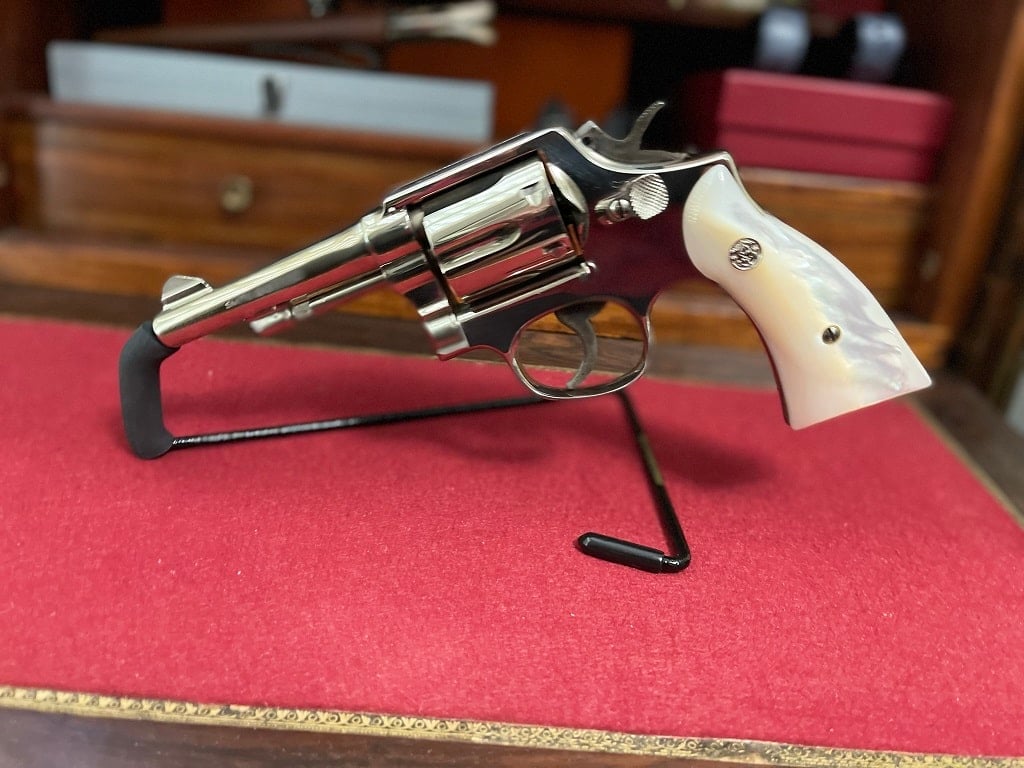 My fascination with guns from the Post-WWII Baby Boom Period (1946-1964) guided my search for an early Model 10. In 1957, Smith & Wesson adopted the convention of using numeric designations to distinguish their various models of handguns, and the M&P was renamed the Model 10. 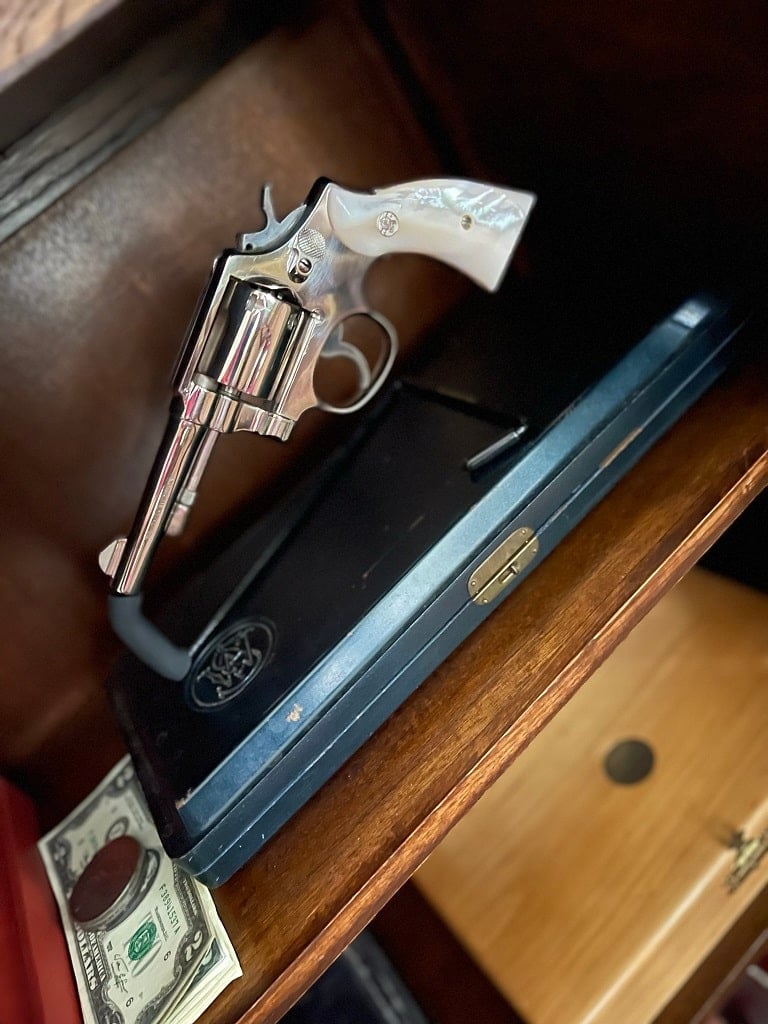 The M&P/Model 10 has been available in both blued steel finish and nickel finish for most of its production run. The model has also been offered throughout the years with both the round butt and square butt grip patterns. Beginning with the Model 10–5 series in the late 1960s, the tapered barrel and its trademark 'half moon' front sight were replaced by a straight bull barrel and a sloped milled ramp front sight. 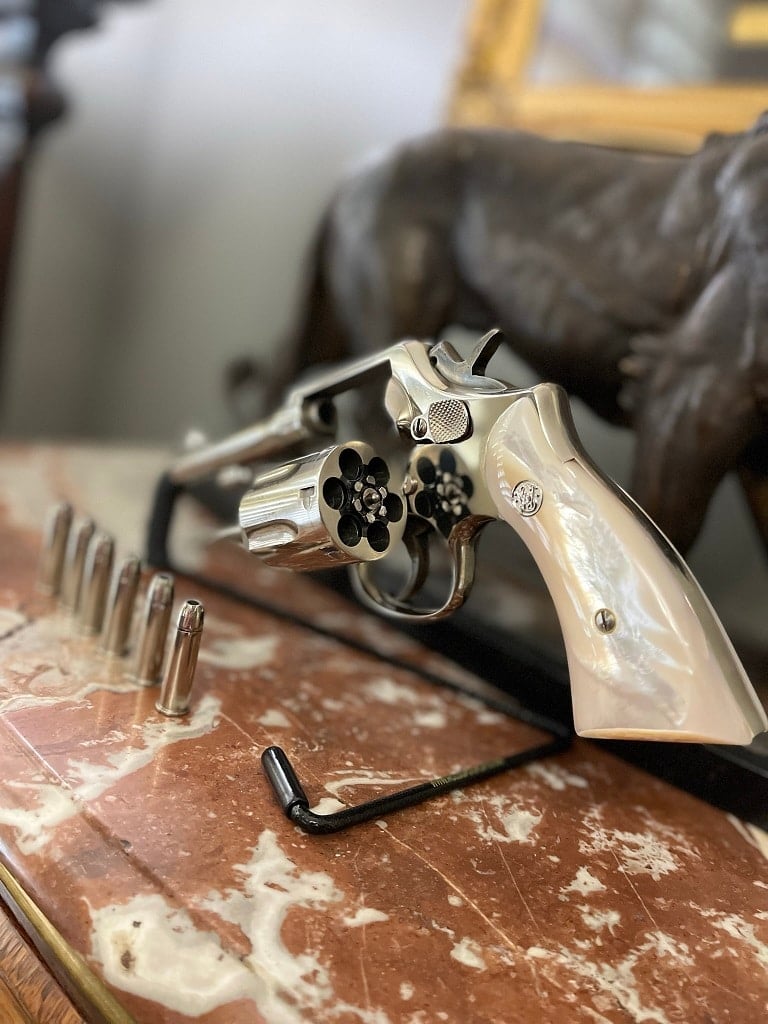 This gun saw 14 engineering changes and was produced in dozens of variations throughout its Post-WWII life and prior to being discontinued in 2010. The gun was so popular that Smith & Wesson almost immediately brought it back in their Classic lineup. 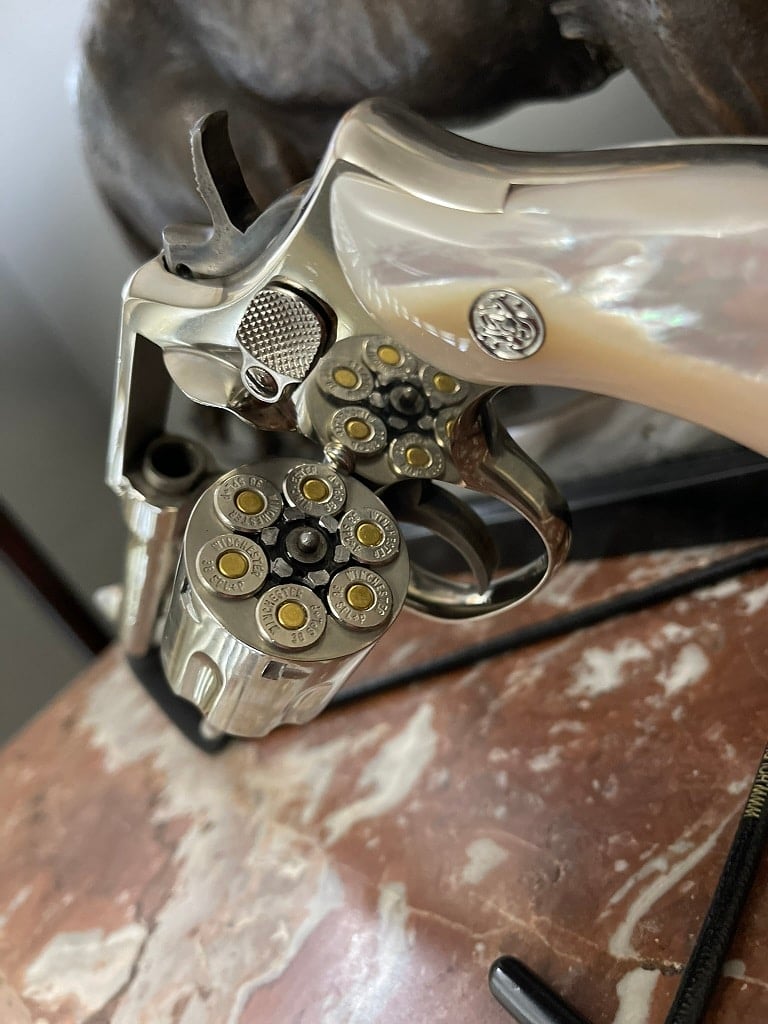 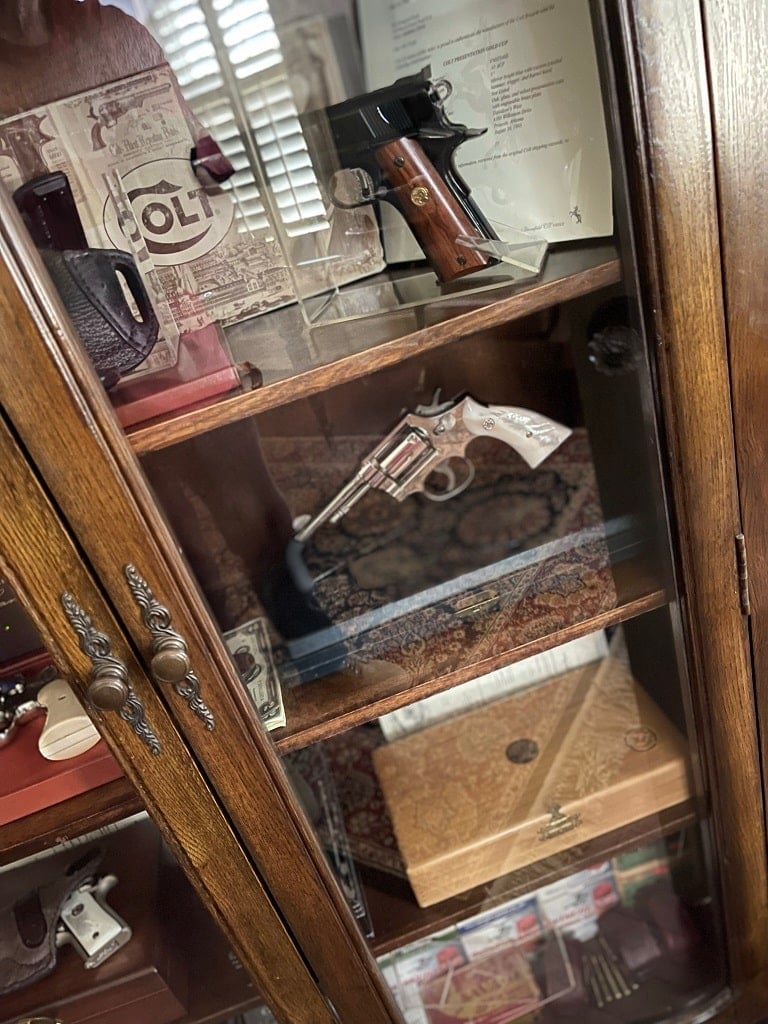 With more than 6 million produced, there's no denying that this gun has been the flagship model for Smith & Wesson. My 1960 example has the firing pin on the hammer, a feature I love. Smith & Wesson replaced this setup with a flat face hammer that strikes a floating firing pin inside the rear of the frame with the Model 10-11 version that came out in 1997.

Just a Few of the Many Production Changes:


This 1960 example is a four-screw gun with a pinned barrel. The nickel finish is mirror-like. It was Saturday afternoon when I snapped the photos for this article. Alabama was playing Tennessee in college football, so I had my crimson shirt on and I was constantly repositioning to avoid the red reflection on the gun.

Have you ever been searching for a particular gun, and an opportunity comes along, one that is not exactly what you wanted, but you couldn't pass it up? Well, that is what happened to me with this particular gun. The gun I was looking for, was a 1957 to 1964 period gun in the bright glass-like blue finish. Then up pops this nickel gun. 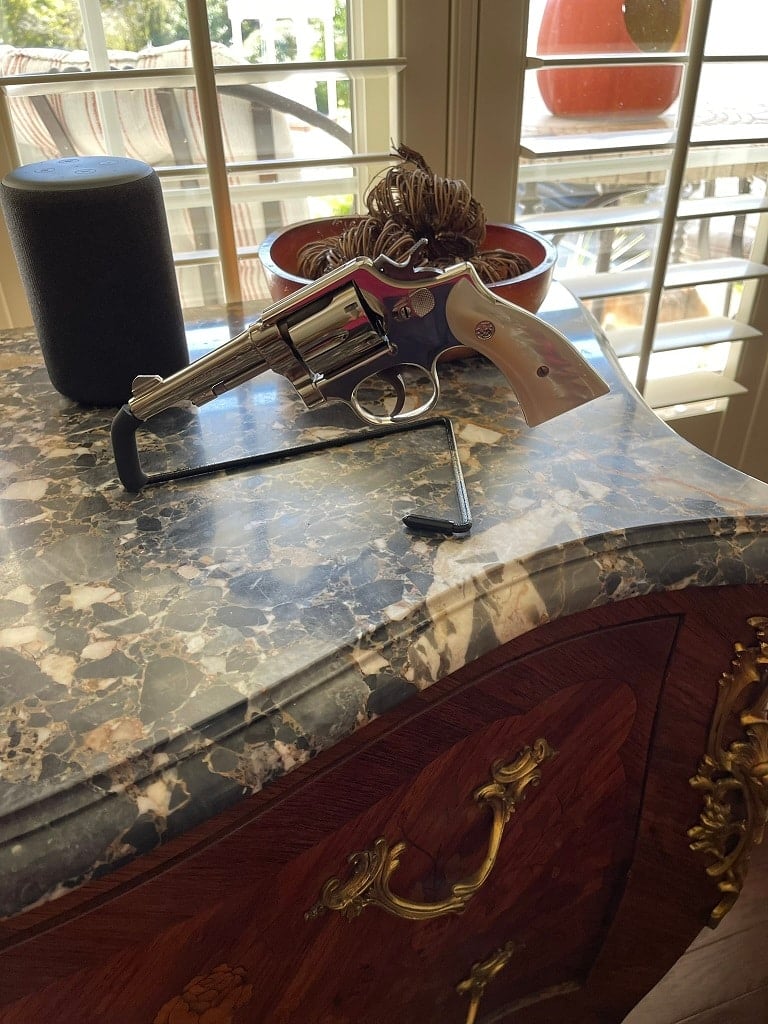 In the auction listing, three of the photos showed what appeared to be rust stain spots inside the gun with the chamber open. The seller was silent about them in his description of the gun and the listing wasn't getting much attention. I felt like I could remedy the situation with the cleaning, waxing, polishing and protectant that Benny had told me about.

My wife said, "What's gotten into you? You've turned into a big Smith & Wesson fan!"

It's true. Benny, my FFL guy has been an influence on me. 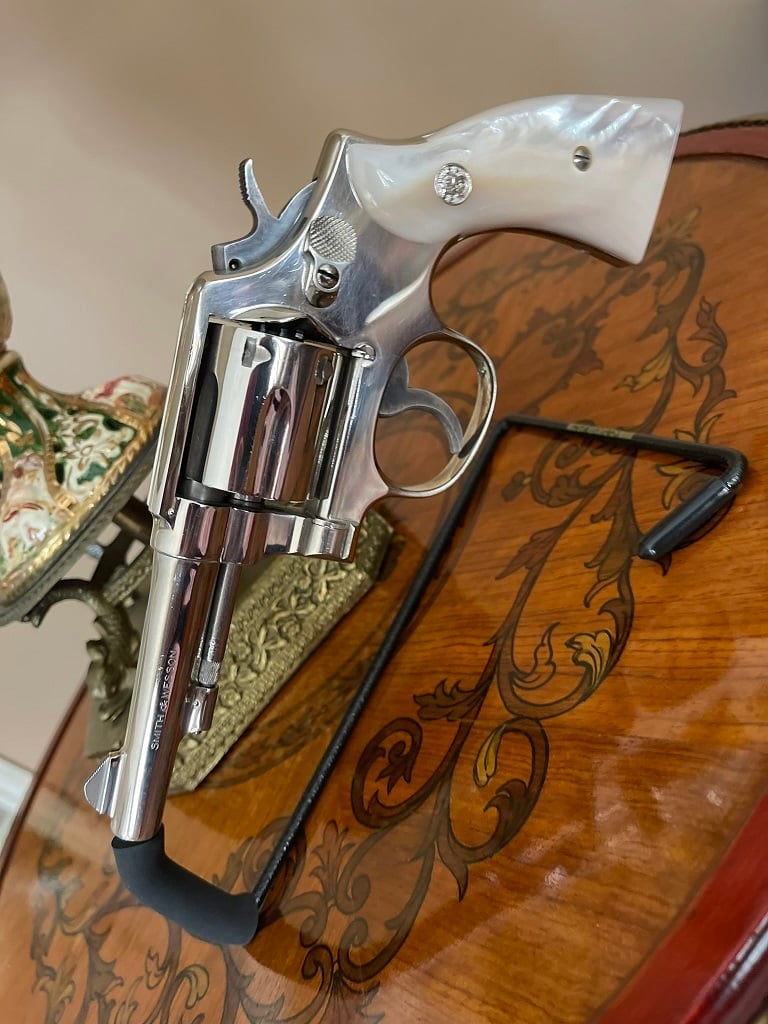 How I managed to go this many years without a Model 10 in my collection, I can't explain. The "Old School" appearance of this gun is classic Smith & Wesson in every way. The speed hammer as it is called on all of my post-war K-22 Masterpiece boxes, was implemented on the M&P in 1947 or 1948, and later all Smith & Wesson handguns incorporated the short-throw action.

The Model 10 serial numbers from this period begin with the letter C...


The Baby-Boom Years of 1946 to 1964 included the Post-War M&P's that still had the long action initially after the war. Then the M&P's with the short action. The Model 10 name was adopted in 1957.

Note: These serial number ranges may not be correct. According to this table, my gun would fall in 1961. However, a member of the S&W Forum shared his serial number with me, which was only 6,300 lower than mine, and his gun had a ship date of December 29, 1959. Update: My S&W Letter arrived, and it says my gun shipped to Tampa, Florida on January 13, 1960.

As I mentioned earlier, 3 of the 46 photos published with the auction listing, appear to show rust stains. It appeared that rust may have penetrated the nickel finish on the crane, but fortunately it had not. 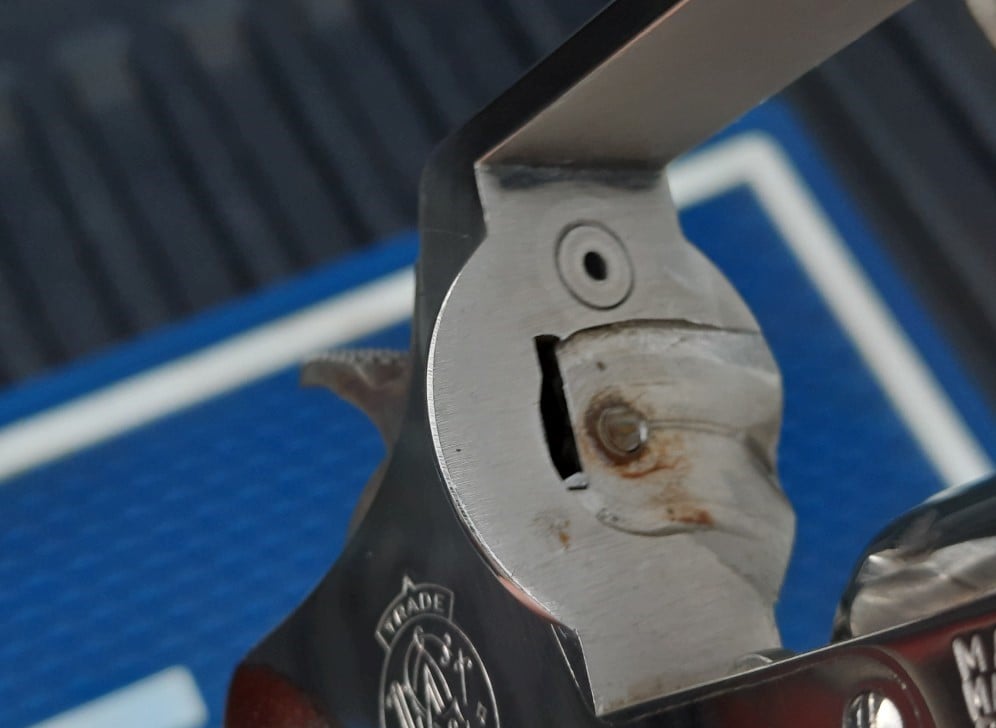 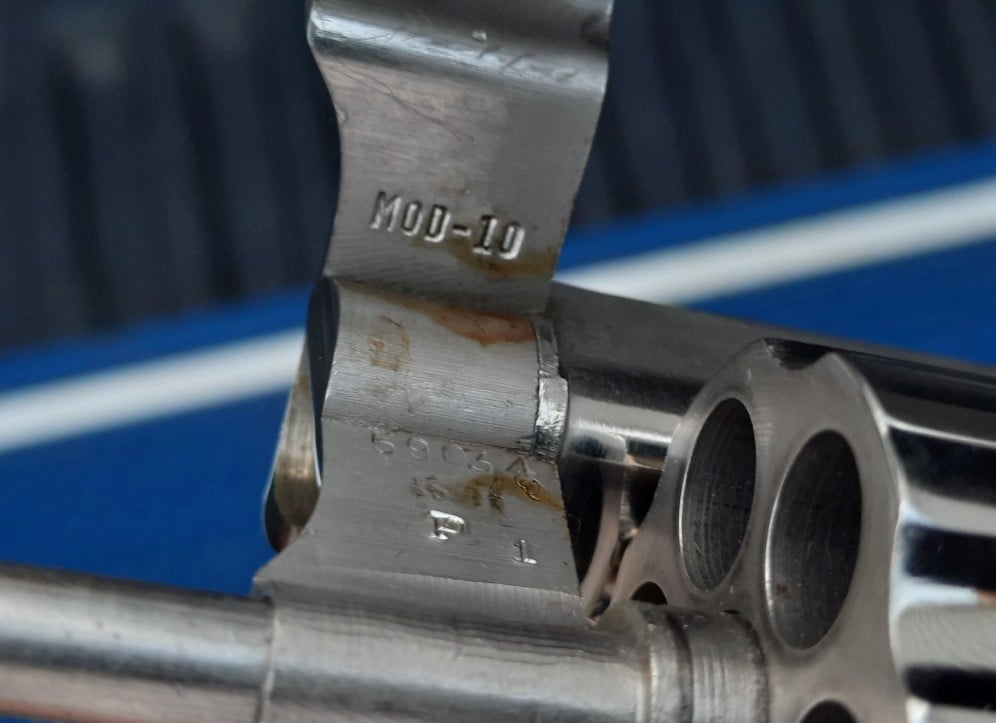 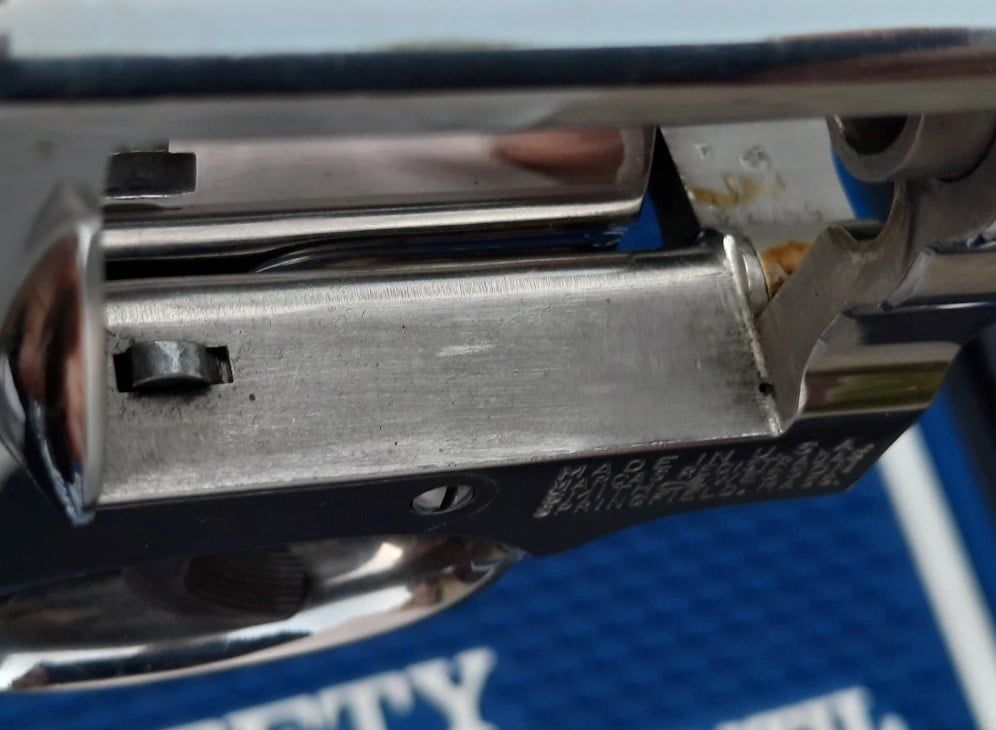 The seller surely could have realized $100 to $300 more for this gun, had he taken the time to carefully clean the gun prior to taking the photos for the auction listing. That last photo is the one that would have scared off many potential buyers. 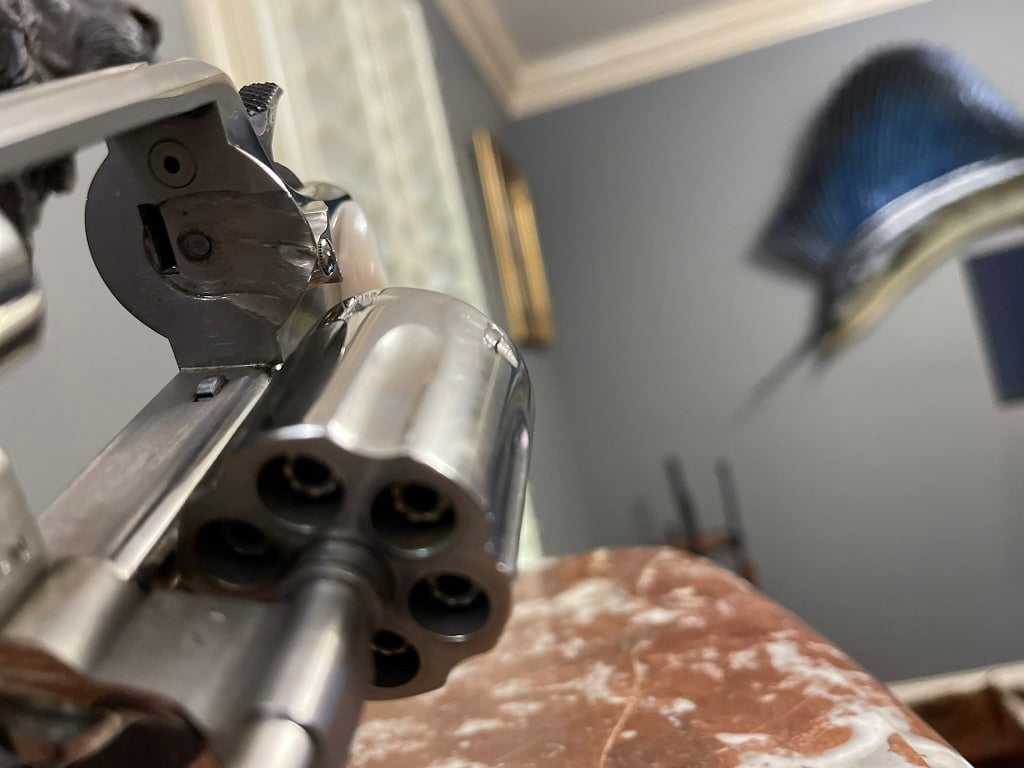 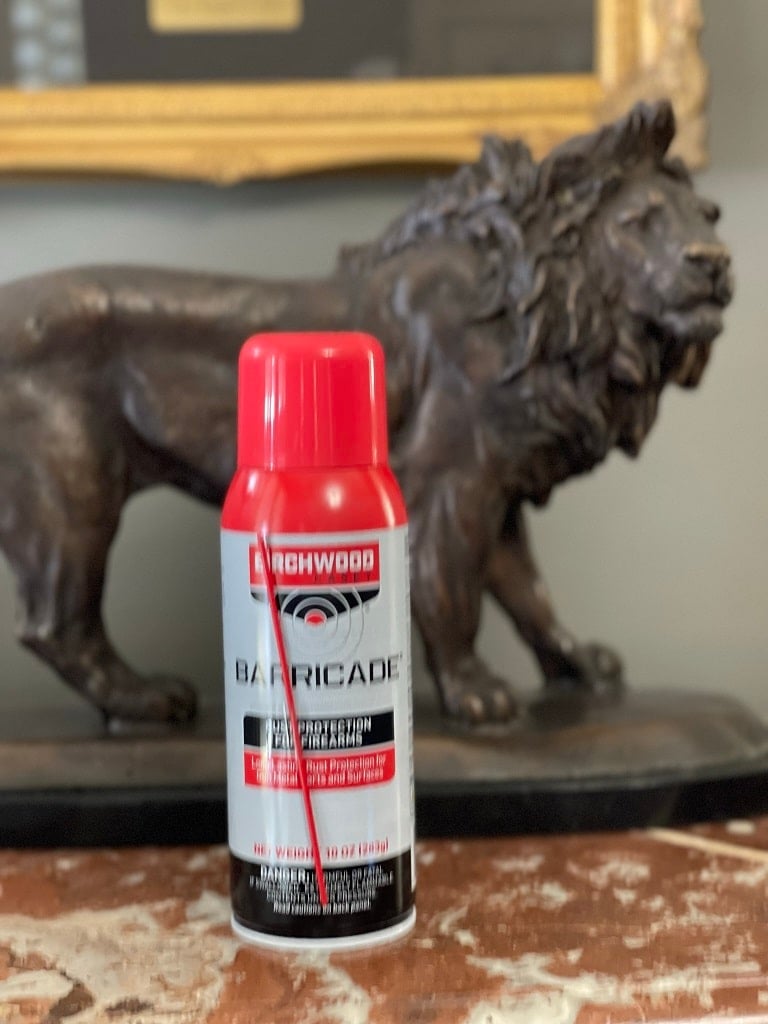 Barricade® rust protection rapidly drives out moisture from metal pores and deposits a transparent protective coating which seals the surface. It’s the best way to protect your firearms from rust. Withstands 500 hours in astm humidity test and 96 hours in astm salt spray test. Barricade® rust protection is also an excellent penetrant for loosening rusty or frozen parts, as well as a good lubricant and an effective bore cleaner. 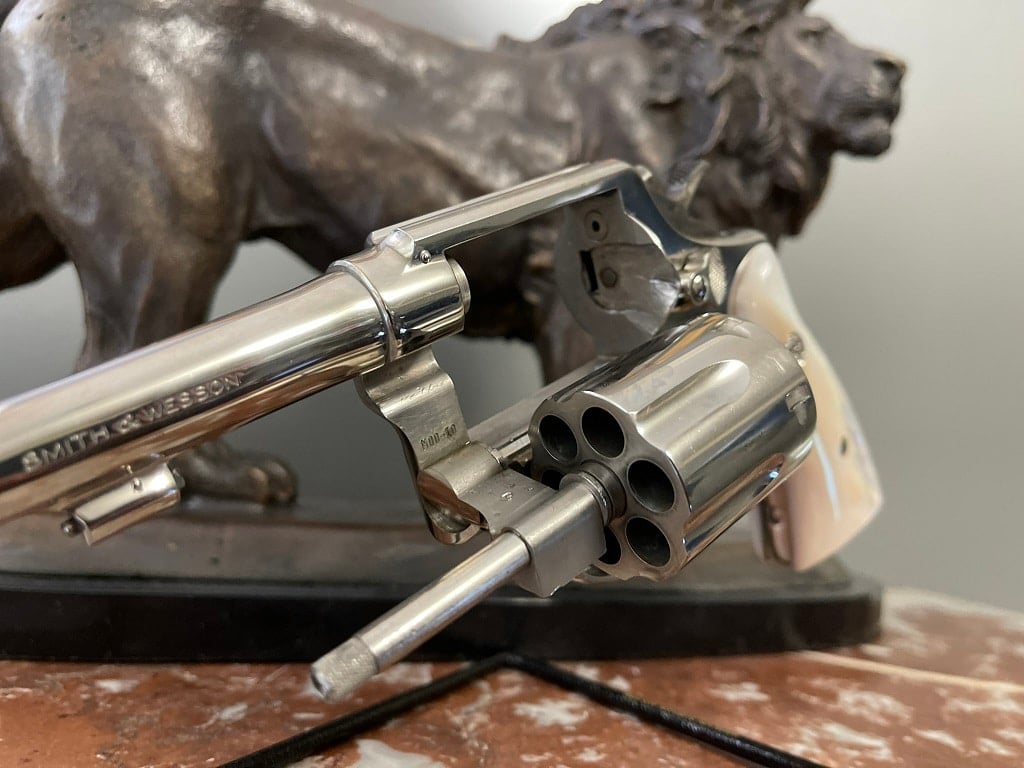 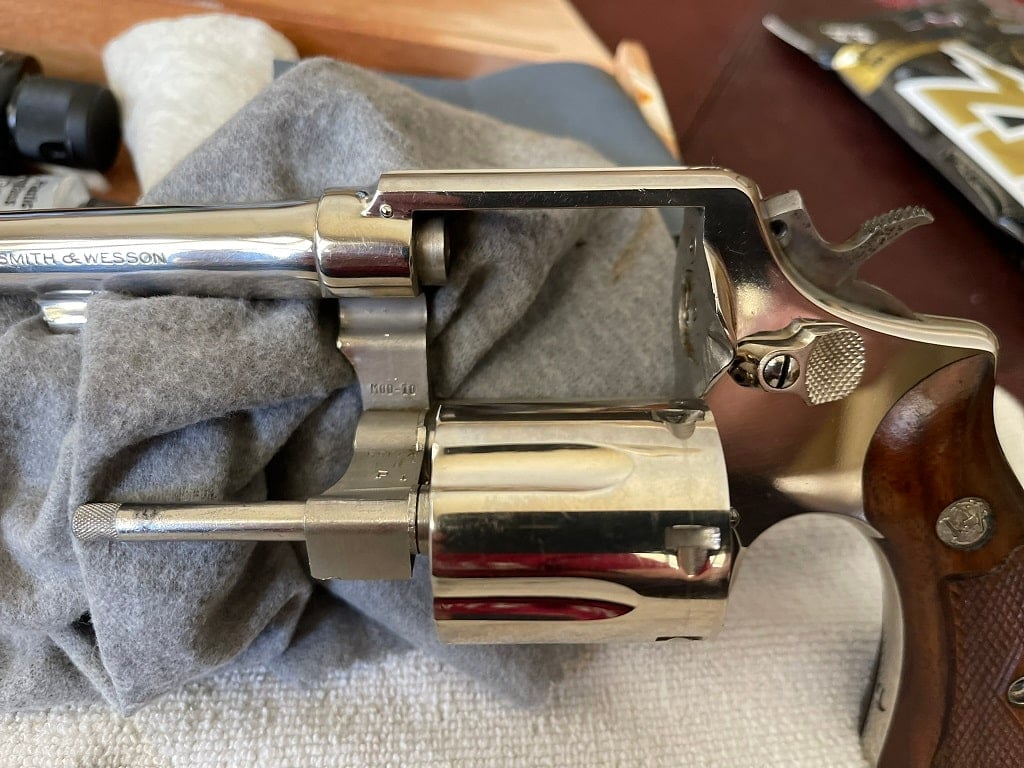 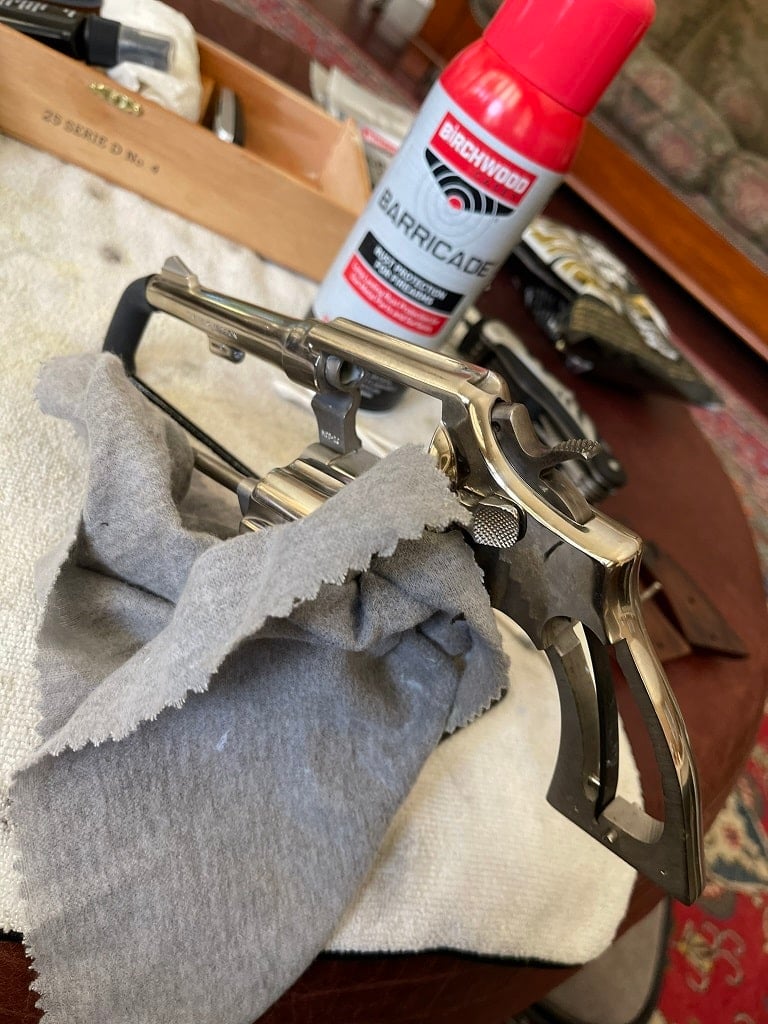 The nickel finish on a 61 year-old gun can be delicate. The very last thing you ever want to do is use any form or method of cleaning or cleaning product that will be abrasive. My Rule #1 is use the right products and Rule #2 is employ the right methods in cleaning an old gun. I have lots of experience at cleaning and polishing with my old Harley Davidson motorcycle. While cleaning this gun, I used more than a dozen Q-Tips, quickly disposing of them as soon as the cotton heads absorbed any color.