From The 20th Century


Some of you will recall that after a 36 year hiatus Colt brought the Cobra back in 2017. But it wasn't the same gun at all. 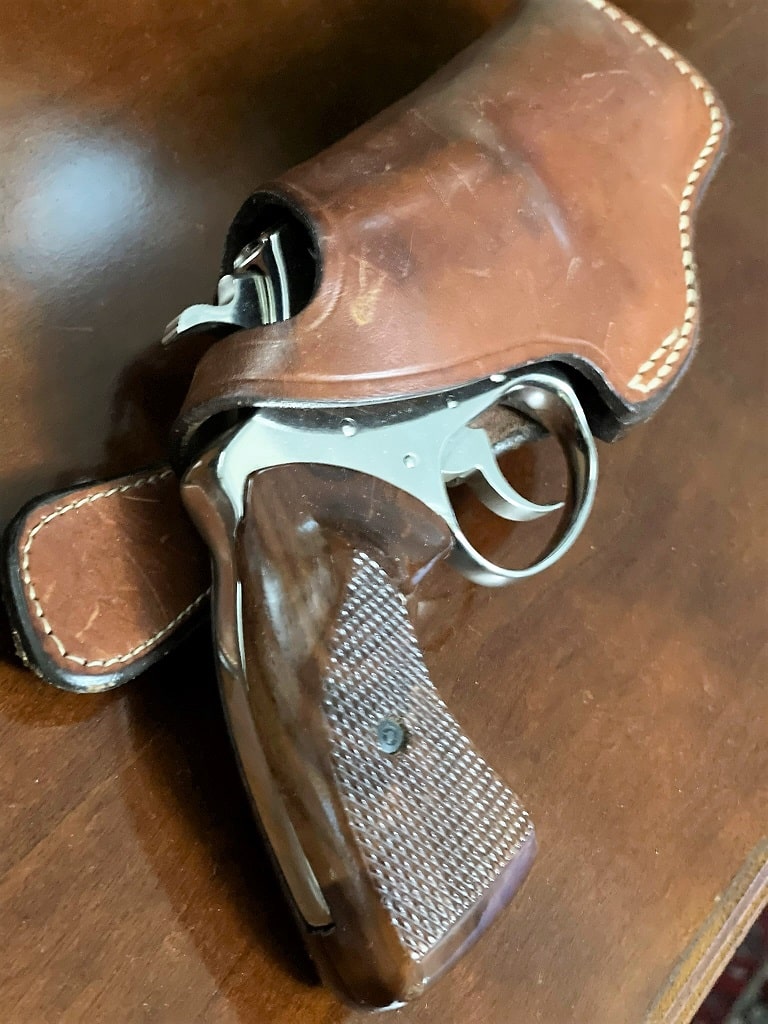 The year I graduated from High School was 1978. It was a good year. Part of 1977 and 1978 was when Colt made the Viper. The Viper was essentially a 4" barrel version of the alloy-framed Cobra, except it looked just like my Police Positive 4th Issue from the same time. 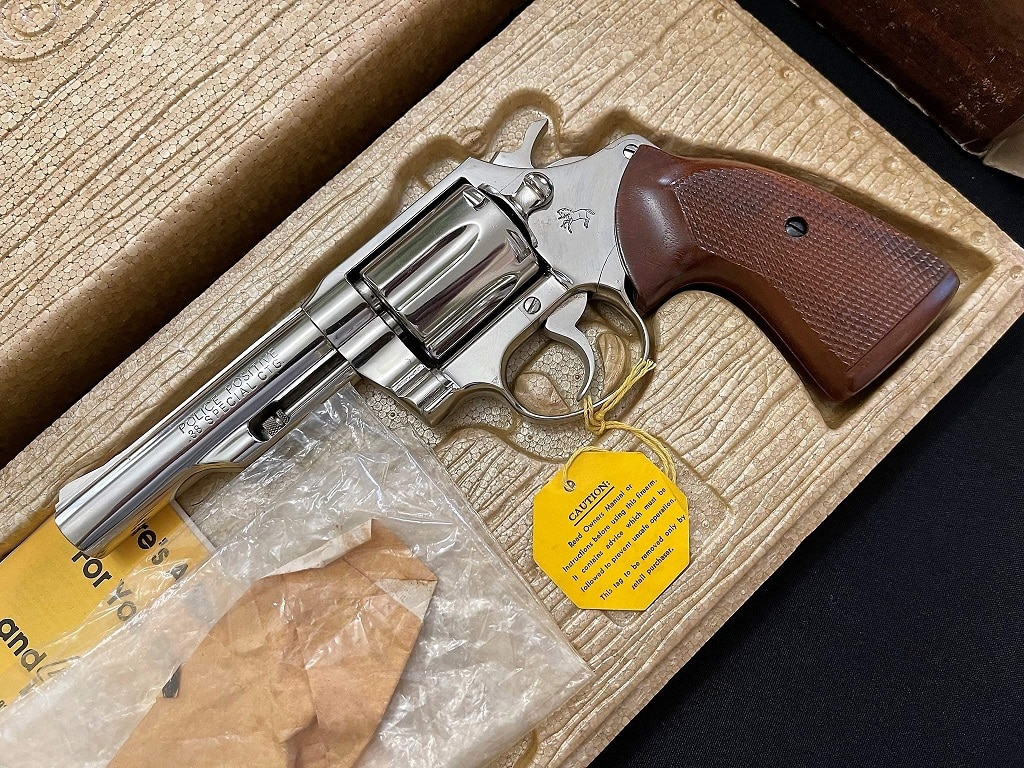 A Look Back to a Comment I Made About the Python ...15 Years Ago

Some very lucky person out there owns the very last Python produced by Colt. I suspect the value of that gun to a collector would be very high. However, as long as Colt remains in business the remote possibility exists that they might produce another Python, thus de-throning the "last produced Python", a proposition that could never threaten the "first Python produced". 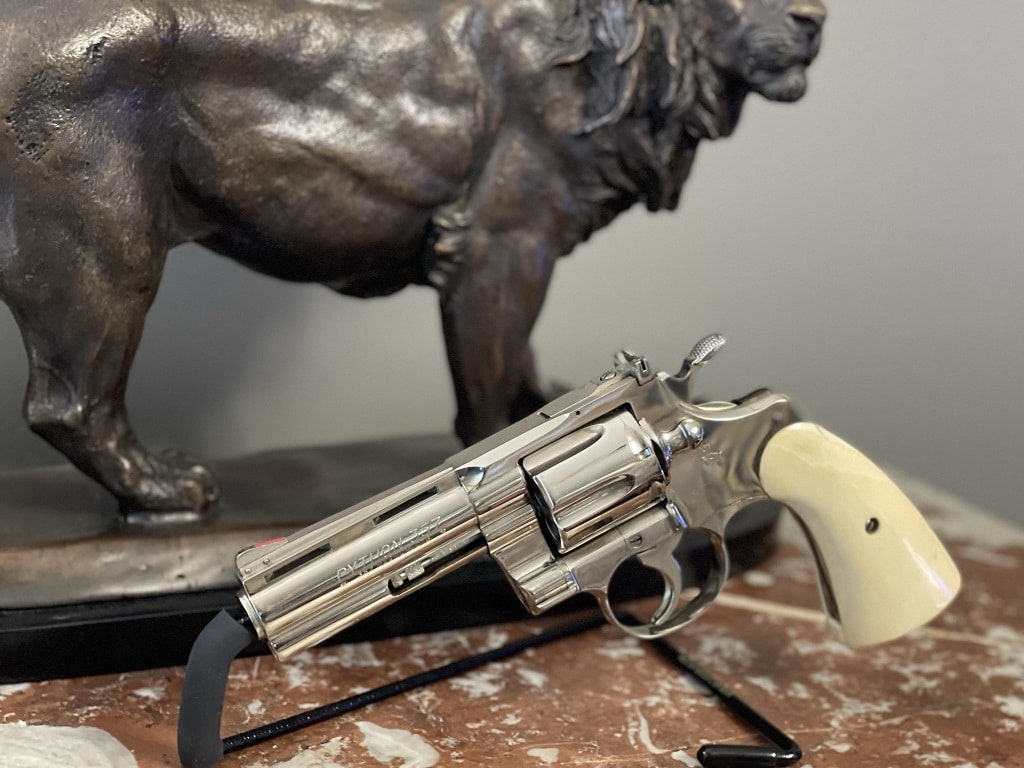 The Colt Python was first introduced in 1955 as Colt's top-of-the-line model. The gun pictured here was made in 1962 and has the full barrel length hollow underlug. The first 50,000 to 75,000 Pythons all have a hollow lug. The first 99,999 Pythons produced have no letter in the serial number. 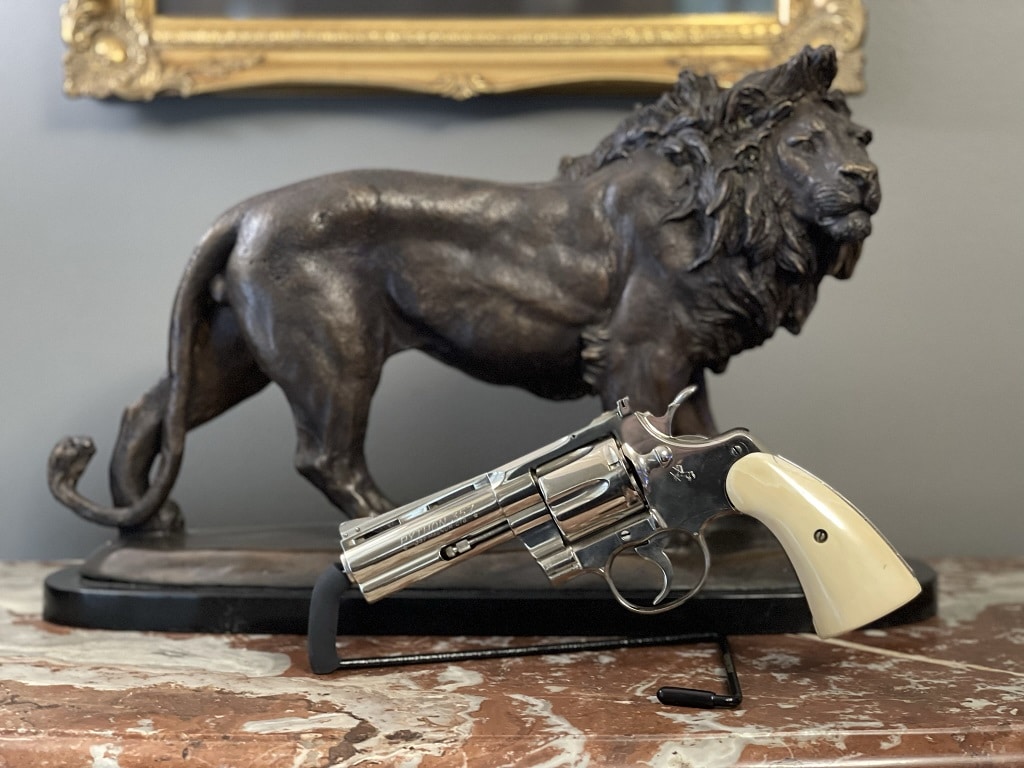 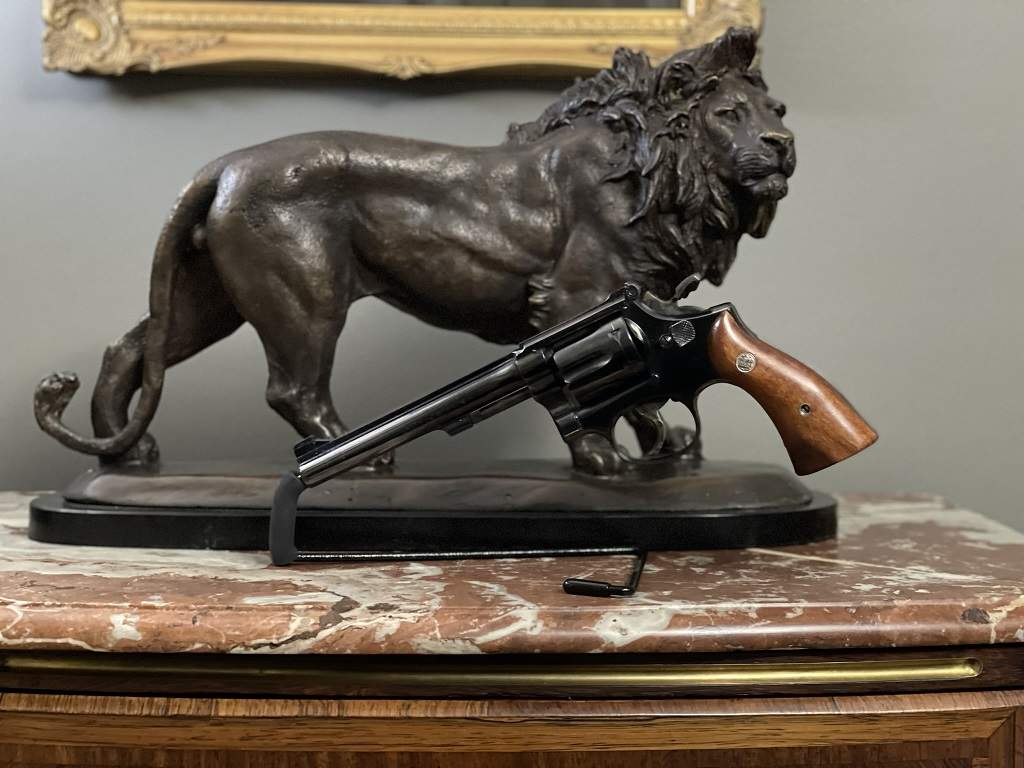 This was the first production K-22 Masterpiece completed in 1946 and was used by the factory to showcase their K-22 line of revolvers. While held by the factory in the show case, it was updated with new features as they were developed, such as the target hammer, target trigger and special grips.

This gun was placed in the Sales Manager's office show case at the Smith & Wesson factory on February 4, 1947.

This is the only "First" of any of the old guns in my collection.

Examples From Every Decade

This gun was manufactured in 1937. Because the A5 is the

A decade dominated by World War II and all things military.

A 1952 Colt Detective Special .32, unfired since it left the factory.

This Colt Python was manufactured in 1965. It has

One of the Most Unique Revolver Shoulder Holsters Ever Made... 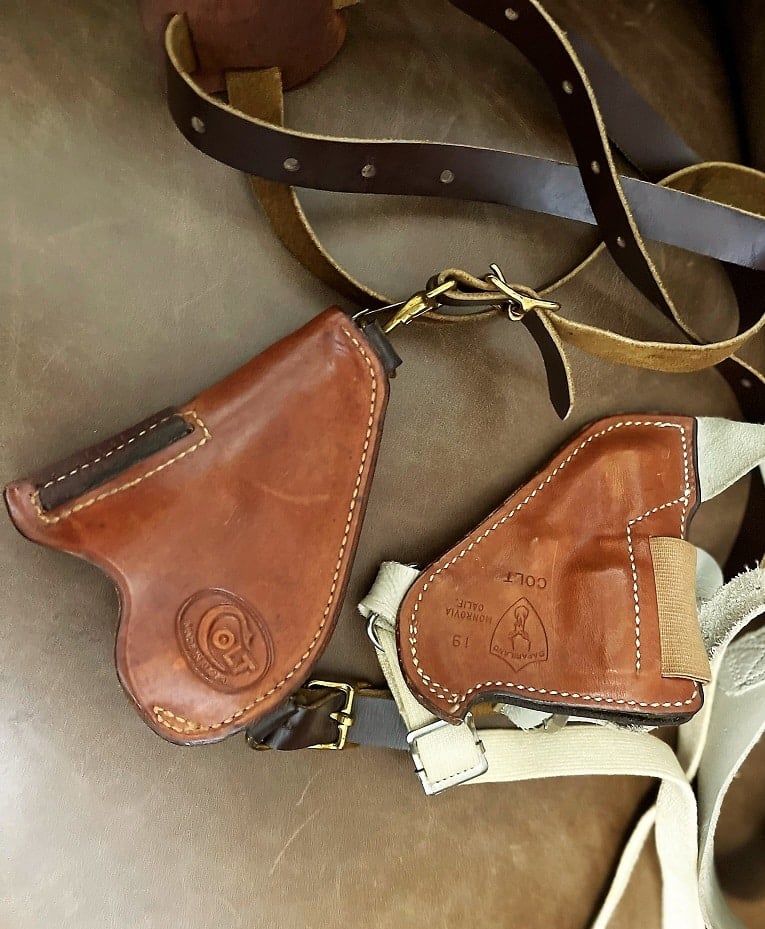 Steve McQueen made this style holster famous when he carried a 2.5" Colt Diamondback .38 in a Safariland Model 19 holster in the 1968 movie "Bullitt." McQueen based the character of Frank Bullitt on San Francisco Inspector Dave Toschi, with whom he worked prior to filming. McQueen copied Toschi's unique "fast-draw" shoulder holster.


Toschi later became famous, along with Inspector Bill Armstrong, as the lead San Francisco investigators of the Zodiac Killer murders that began shortly after the release of Bullitt. Toschi is played by Mark Ruffalo in the film Zodiac, in which Paul Avery (Robert Downey Jr.) mentions that "McQueen got the idea for the holster from Toschi." 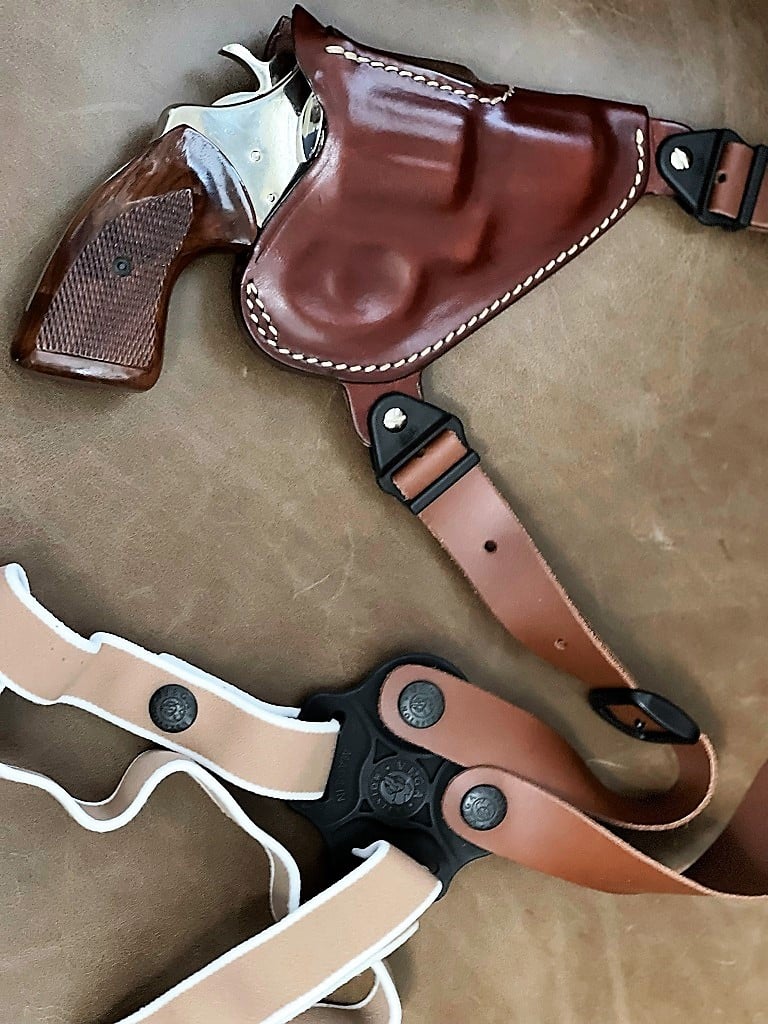 If you've read much of my Gun Blog at all, you know that my 1974 and 1978 Colt Cobras are two of my favorite carry guns. So I'm always keeping an eye open for new holsters for these two guns. Last June I ran across this upside-down, vertical shoulder holster.

It's Italian made from high quality cowhide leather. Modern improvements make this holster even better than my two antique versions of this design. Specifically, the leather molds itself to the gun, the center-piece in the back where the straps meet, high quality snaps and buckles and a widened strap over your shoulder to support the weight of the gun reduces stress.

After searching the internet for years to find a modern version of the old Safariland Model 19 holster, I finally discovered this Vega DA-111. As much as I like the new holster, I still love my old almost worn-out ones as well. There is an entire section of my website dedicated to Gun Leather, old and new. I also provide links to some of the best holsters on the market, which can be hard to find at times. 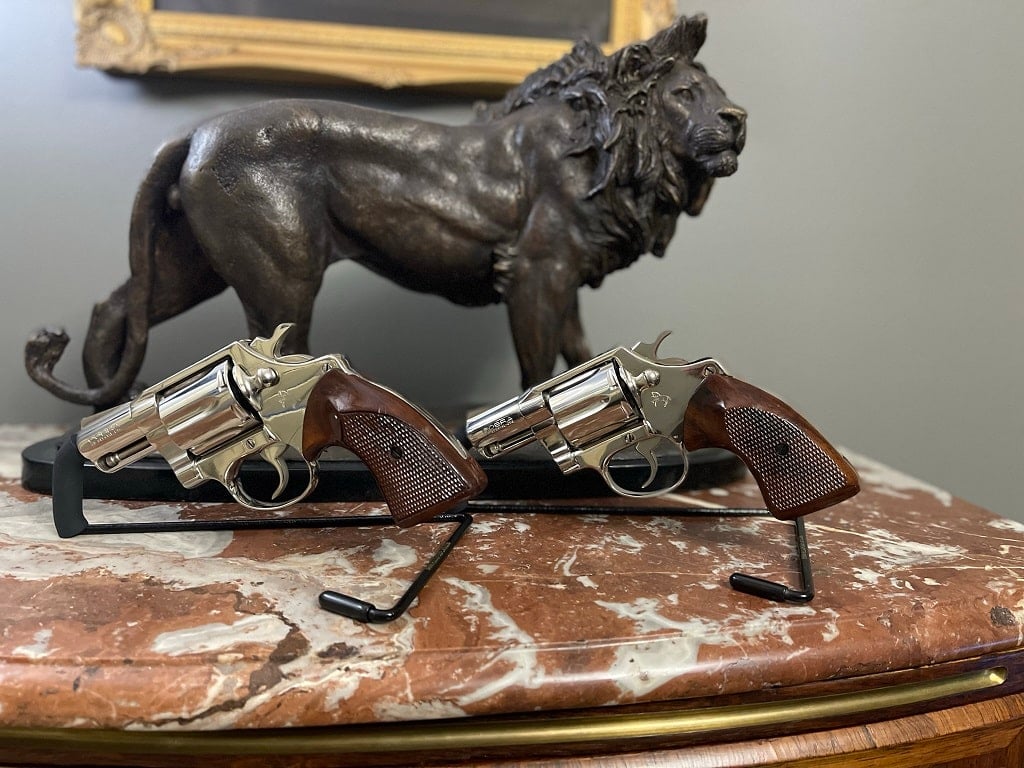