"Badges? We don't need no stinking badges." The year was 1948 and Humphrey Bogart was filming the movie "The Treasure of the Sierra Madre." Another of his films was already in theatres that year, "Key Largo."

The Berlin Blockade and Airlift kicked off the Cold War. The State of Israel was created and the Arab-Israeli War occurs. The United States Armed Forces were desegregated and women were allowed in the Air Force (WAFs). The first woman was elected to the Senate. The Summer Olympics made their return in 1948 in London, England. 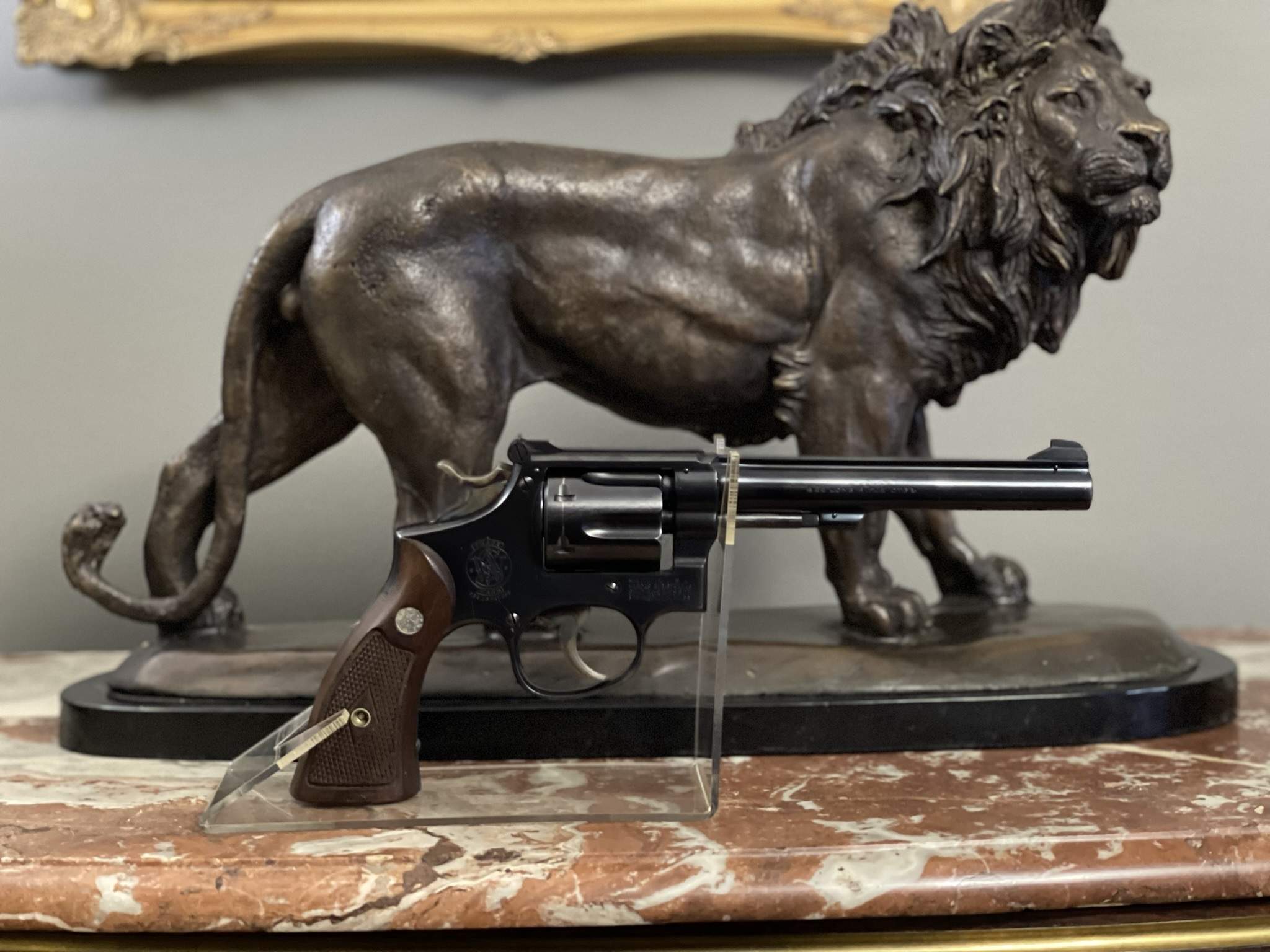 George Orwell finished his manuscript for his new book "1984" and checked himself into a TB Sanatorium in 1948. This was the backdrop of how things were when my k-22 Masterpiece rolled out of the Smith & Wesson factory that same year. 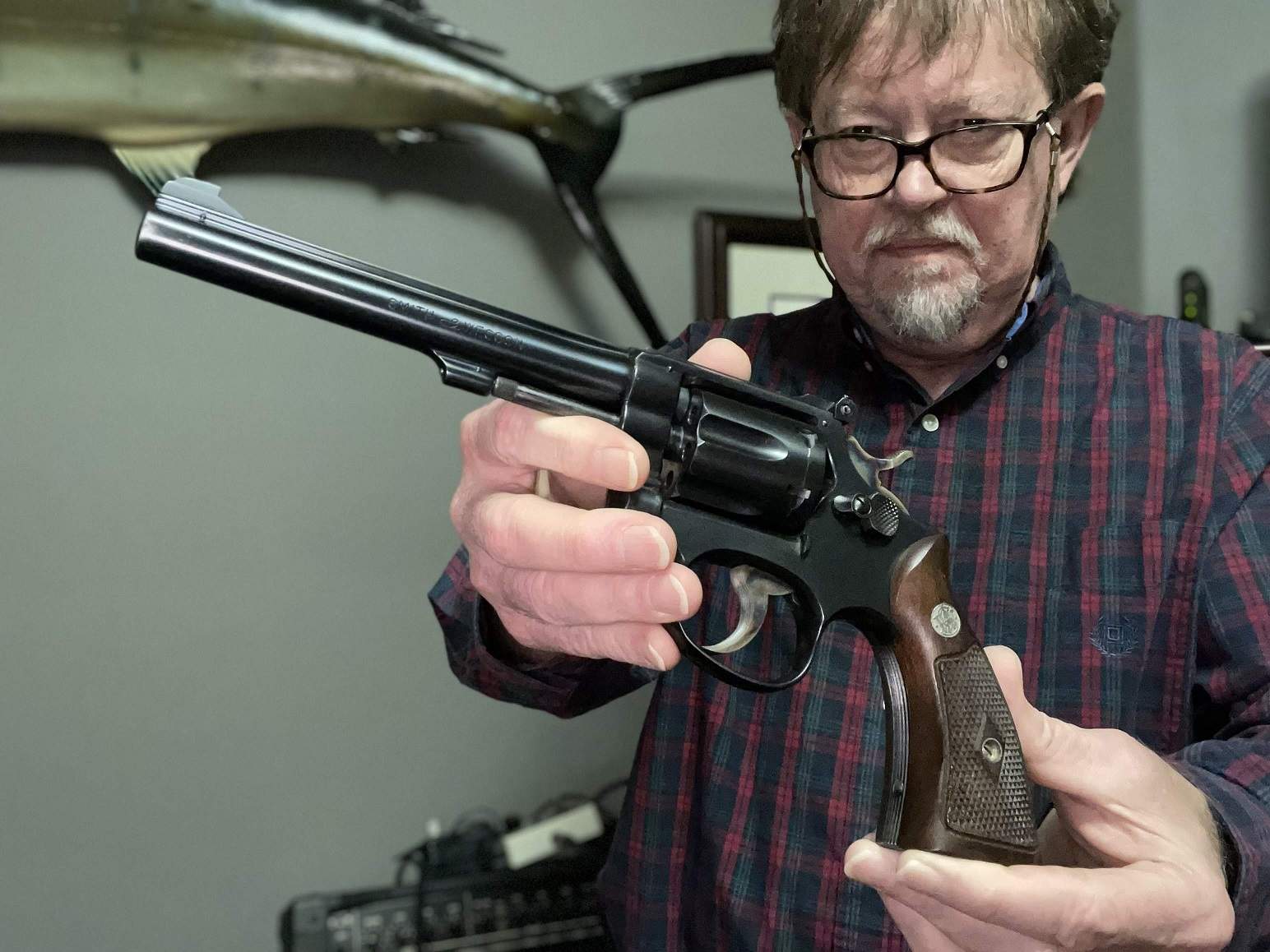 When I picked this gun up from Benny, my FFL guy, I told him I was going to be embarrassed to write about it and disclose what I had paid. He laughed and quickly changed the subject from the extra $250 cost, to the tapered barrel and all of the serial number locations on the 1948 gun. 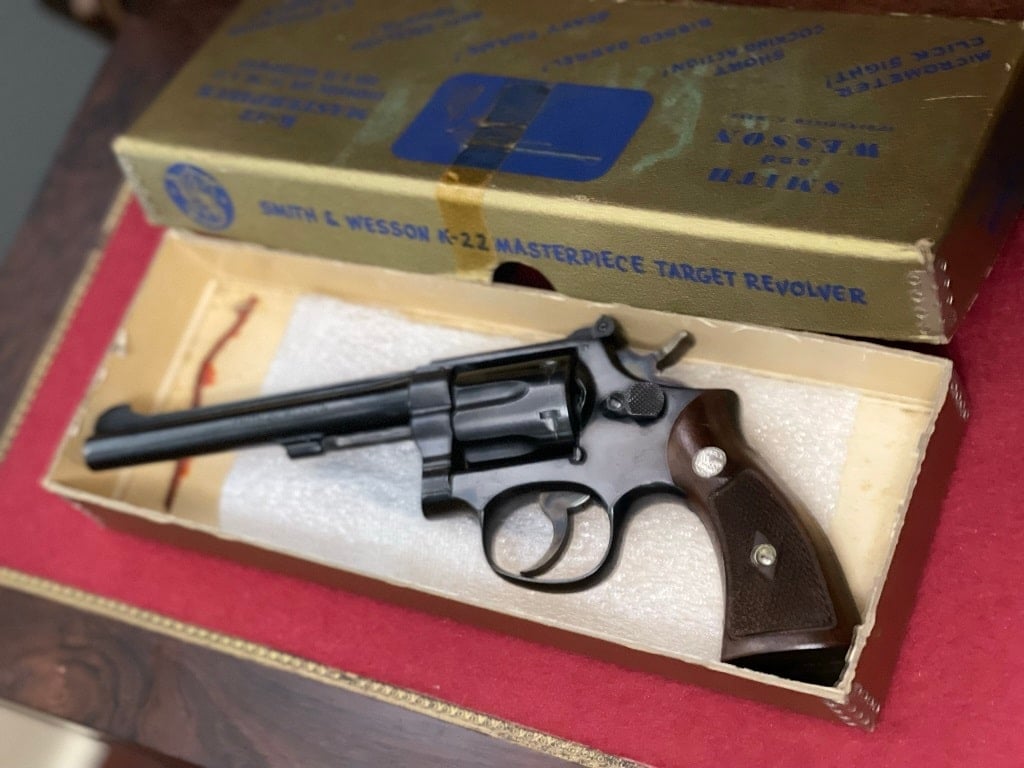 For some reason, Smith & Wesson stamped the "K" spaced far away from the numbers, although it is part of the serial number.

The K-32 and K-38 companion guns would have been in this serial number range as well. During my search to buy three of the third model K-22 guns for Christmas gifts, I noticed that there were more 1948 guns being offered for sale. I thought it peculiar, so I went back to the serial number table to take a closer look. 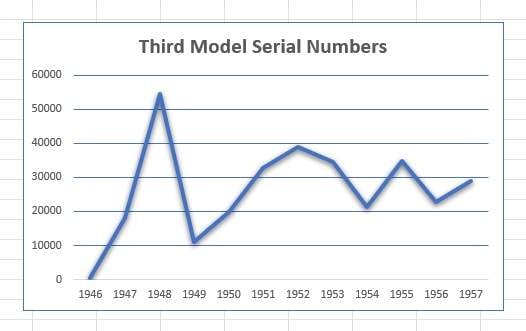 What did I find? Sure enough, more third model guns were assigned serial numbers in 1948 than any other year. Remember, there can be a big difference in the manufacture date and the ship date of a gun. The only way to know for sure is order a letter on your gun. 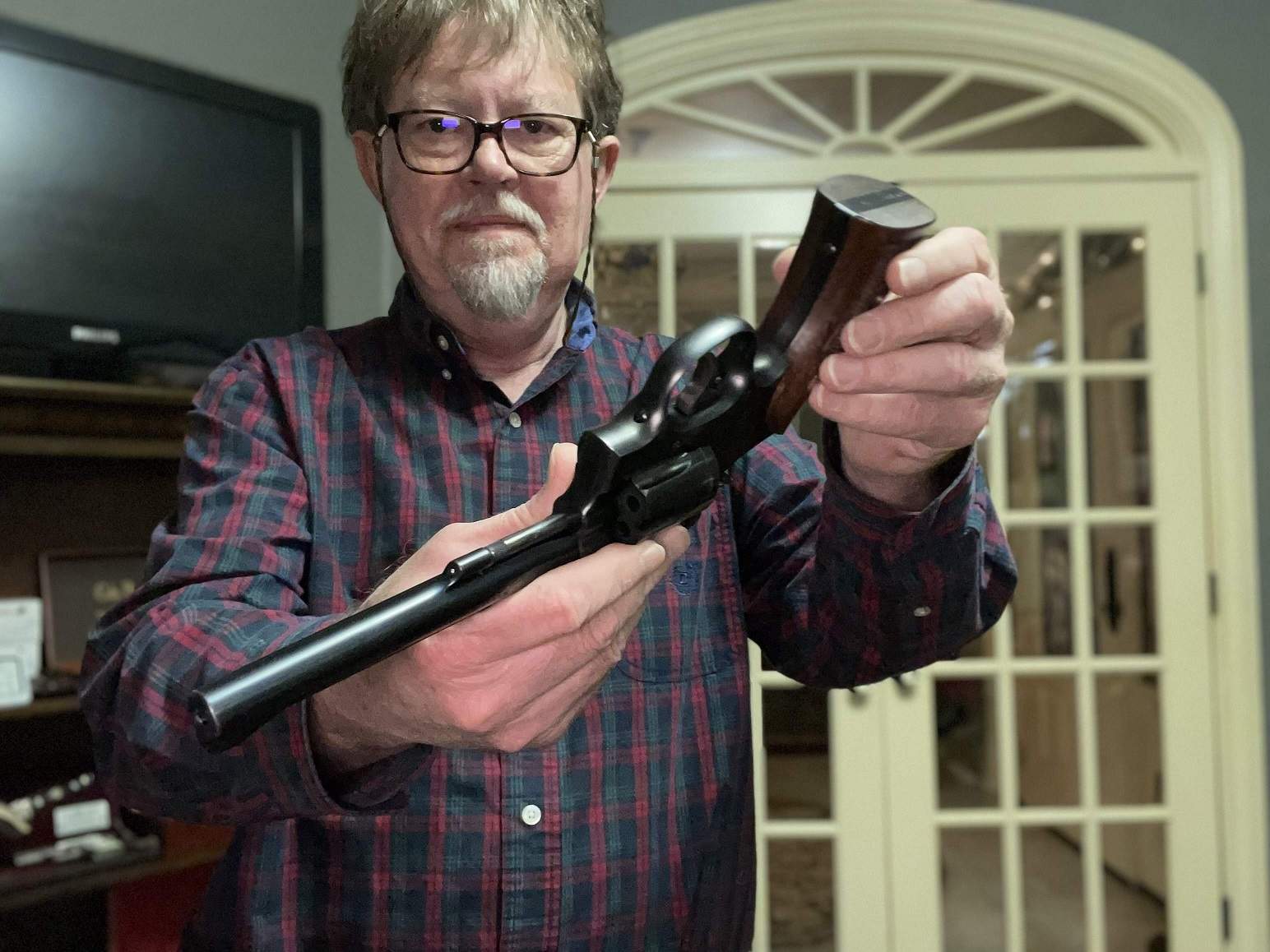 The fewest serial numbers were assigned in 1949. But there were four other years when the production numbers were low; 1947, 1950, 1954 and 1956. After I began investigating production numbers I couldn't stop there. I started looking at the changes to the gun during this period. I'm not an authority. In fact, I'm barely a novice when it comes to the third model K-22. Don't take anything here as gospel. 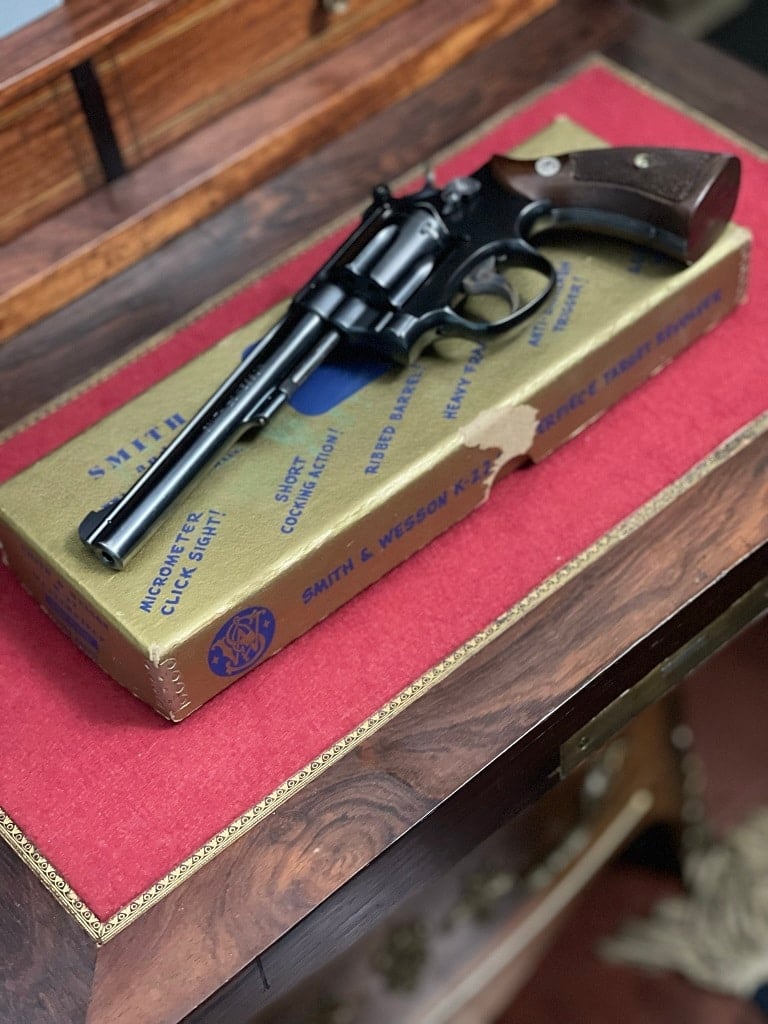 In searching for one of these guns you will likely run across the term The Three T's:


My 1948 gun exhibits none of those traits. It has the tapered barrel with narrow rib and the Diamond Magna Style Grips, which I love. I would like to have an example with the target hammer and trigger. 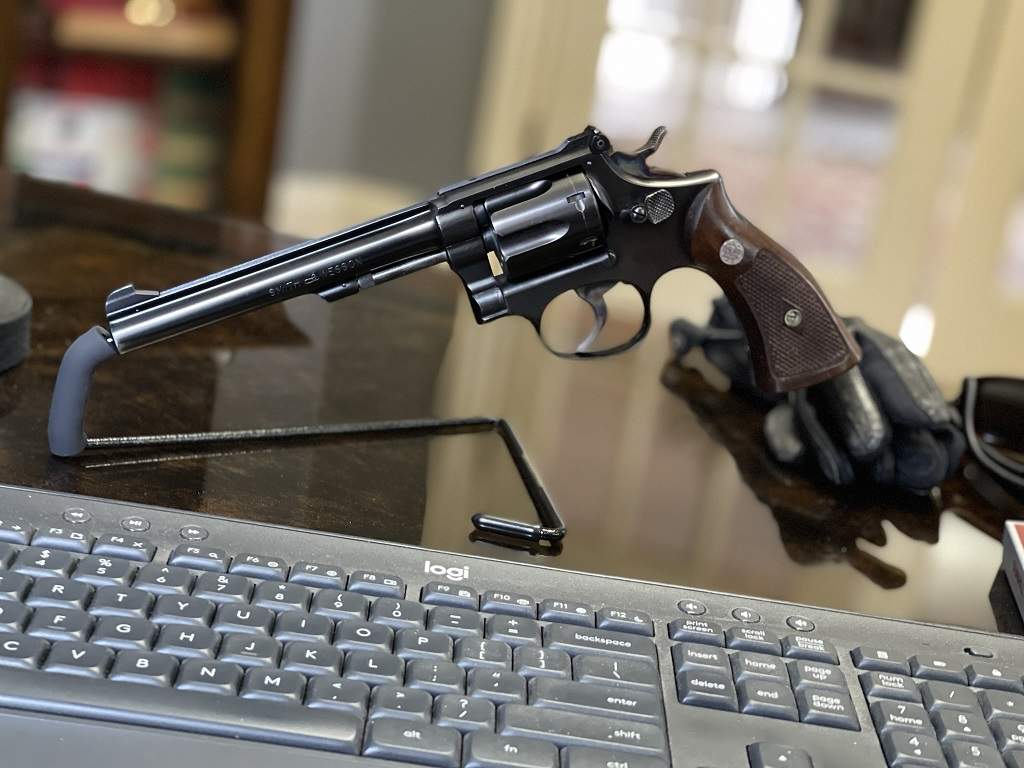 It Truly is a Masterpiece

From just a quick glance at the Serial Number Table, one would surmise that Smith & Wesson turned out more of the third model, post war, pre-model 17 guns in 1948 than any of the other years they were in production. Secondly, you would also draw the conclusion that other than the first year of production (which really only represented one month, December 1946), that the lowest output occurred the following year in 1949.

What happened to production in 1949?

Serial Number assignment has to represent manufacturing activity, even though it may not represent shipping activity. And from the looks of things, S&W put the brakes on in '49. Perhaps they turned their attention to other models or lines. I will see what I can learn. I've read that in 1949, 100,000 TV Sets were being sold per week. Perhaps everyone was home watching TV in 1949. 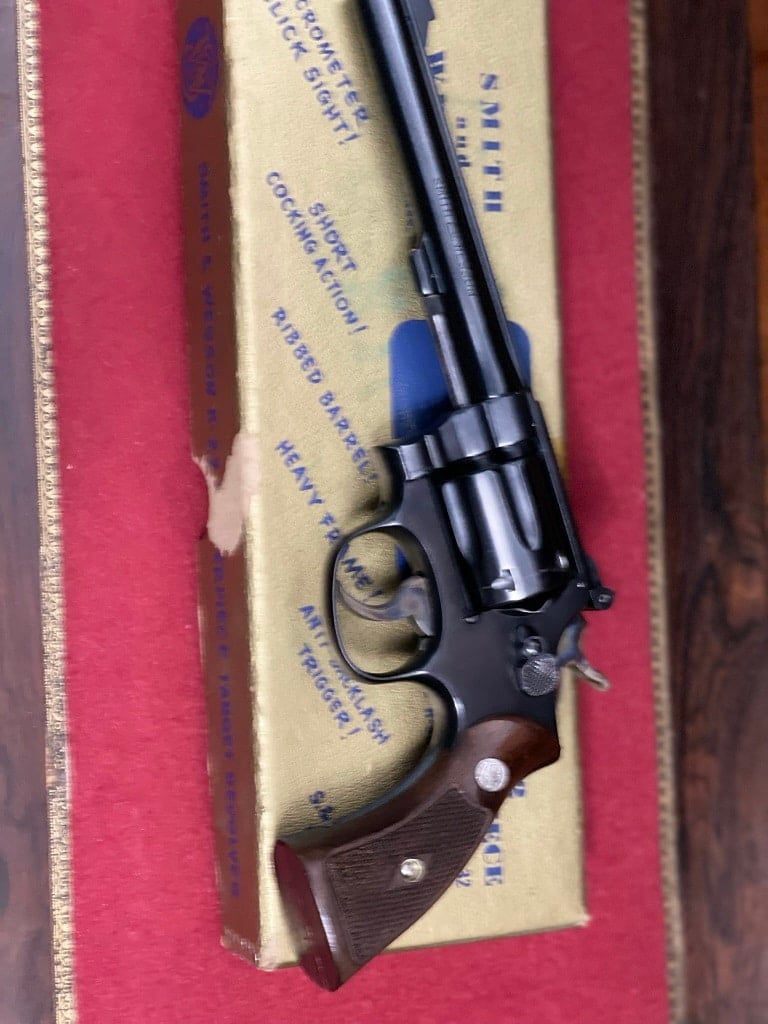 WARNING: I'm about to meander off course into areas with which I'm not yet fully familiar.

Changes to the Third Model 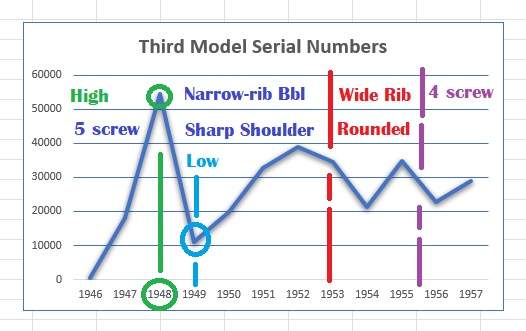 There were changes to the gun during this 11 year period. But because they were all made prior to the Model 17 and Dash Designations, there was nothing to signal those changes. Changes could have occurred on "X" and "Y" dates, but a gun shipped on "Z" date would have neither of those changes because of the backlog. Or, a gun could have the "X" change, but not the "Y" change, or vice versa!

The change from narrow to wide rib seemed to occur about 1953 like the grip change, but I couldn't pin it down enough to try and estimate the number of guns with each. The wide rib may have been available as early as 1950 and you could still get the narrow rib, perhaps as an option much later. As I found a 1955 gun for sale with the narrow rib.

For the 1955 year serial numbers, it seems the change from 5-screw to 4-screw occurred about mid-year. So you are equally likely to find either 5 or 4 screws on a 1955 K-22. It appears that the standard finish on these target revolvers was the satin blue finish, but the bright blue or high polish finish could be had as an option before it became standard in 1955 or 1956. I've seen the bright blue on 1948, 1955 and 1957 guns for sure. 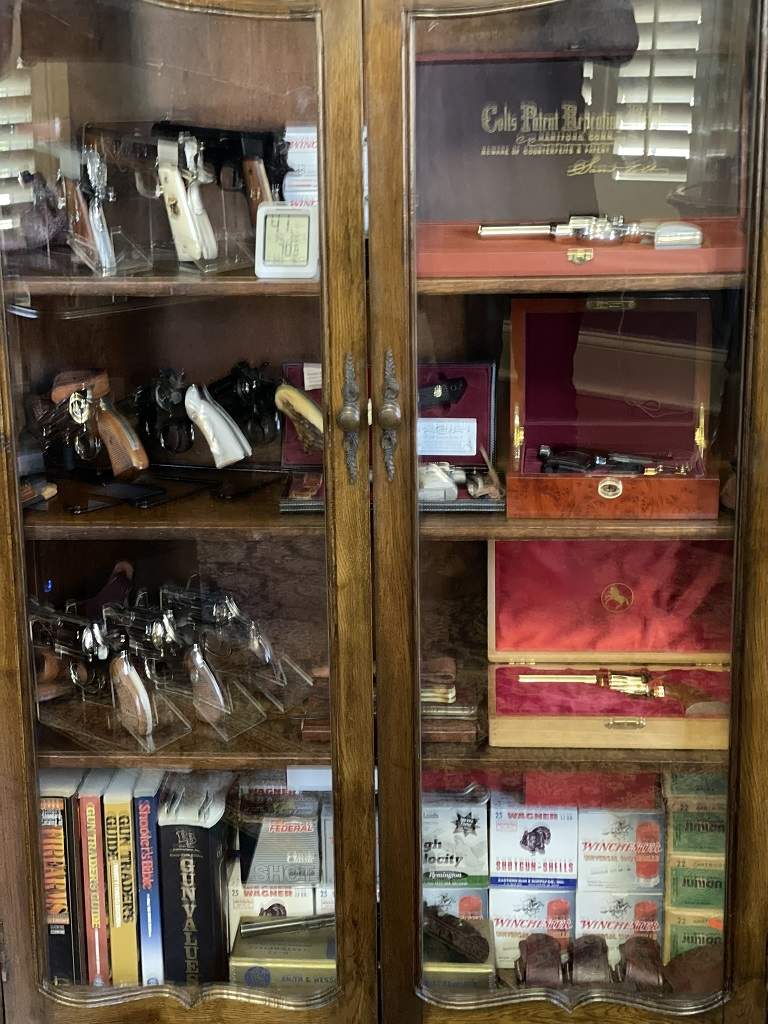 In monitoring K-22 sales for the last month, I discovered that you cannot determine age or year by the satin versus bright finish alone 100% of the time. I have yet to see a nickel-plated version for sale. I've learned to never say never with these guns and that I have a lot to learn.

Of the four K-22's I bought last month, I paid the most for this one. It really is in excellent condition, has been fired very little, has the original numbered box and all of the tools that came with it when new. I love the bright blue high polish finish, but when the condition is high, like this 1948 gun, that satin finish is creamy beautiful. This 1948 gun is described with the following features on the Gold Box:

When I bought three more of this third model version of the K-22 to give to the men for Christmas, I acquired a 1950, 1953 and 1957 gun. I've since thought about trying to accumulate one from every year of production or even the Baby Boom Period (1946-1964). I recently saw serial number 250 from the first year up for sale. Don't you know I thought about it. UPDATE: After learning this gun was the first of this model to be completed at the factory in 1946, I bought it. 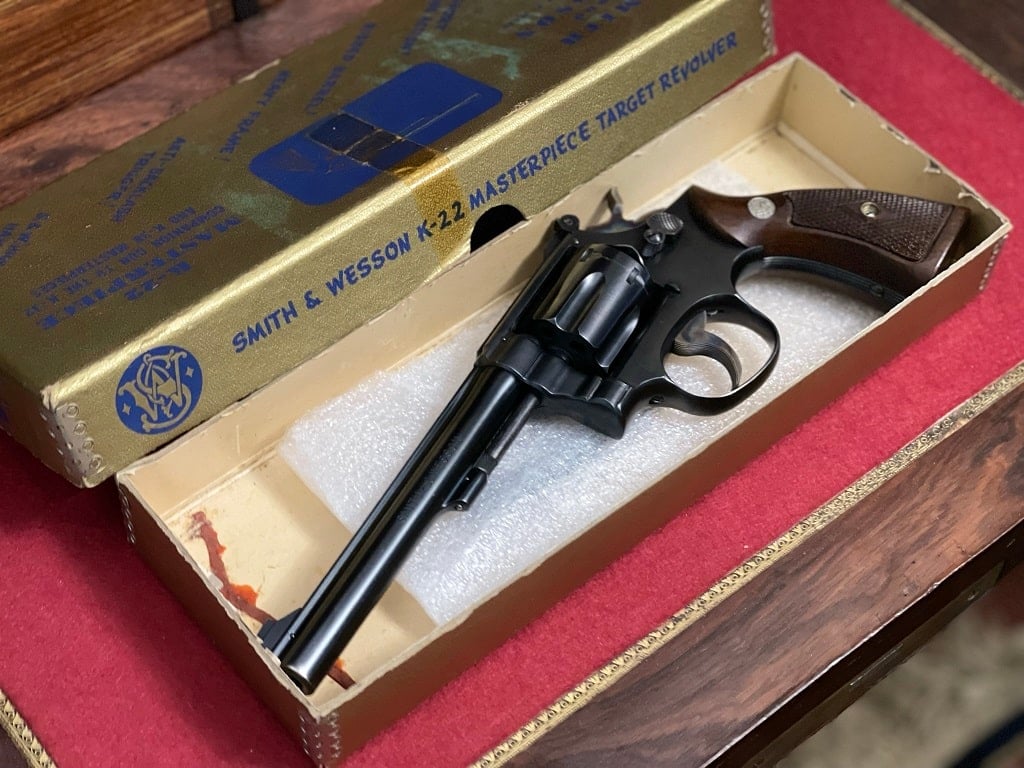 When I lined those four K-22 third model K-22 Masterpiece guns up, side by side on the dining room table, the average person would have noticed no differences in the guns. My wife spotted the bright finish on the '57 gun. But even the trained eye would require a closer inspection to detect the narrow rib and wide rib variants.

As I wrote about this gun, it dawned on me that I have another S&W made gun...


My Walther PPK/S .380 was made by Smith & Wesson in Houlton, Maine! The company made the Walthers there from 2002 to 2013. To me, the ergonomics of that Smith-made Walther are perfect. It feels really good in my hand. 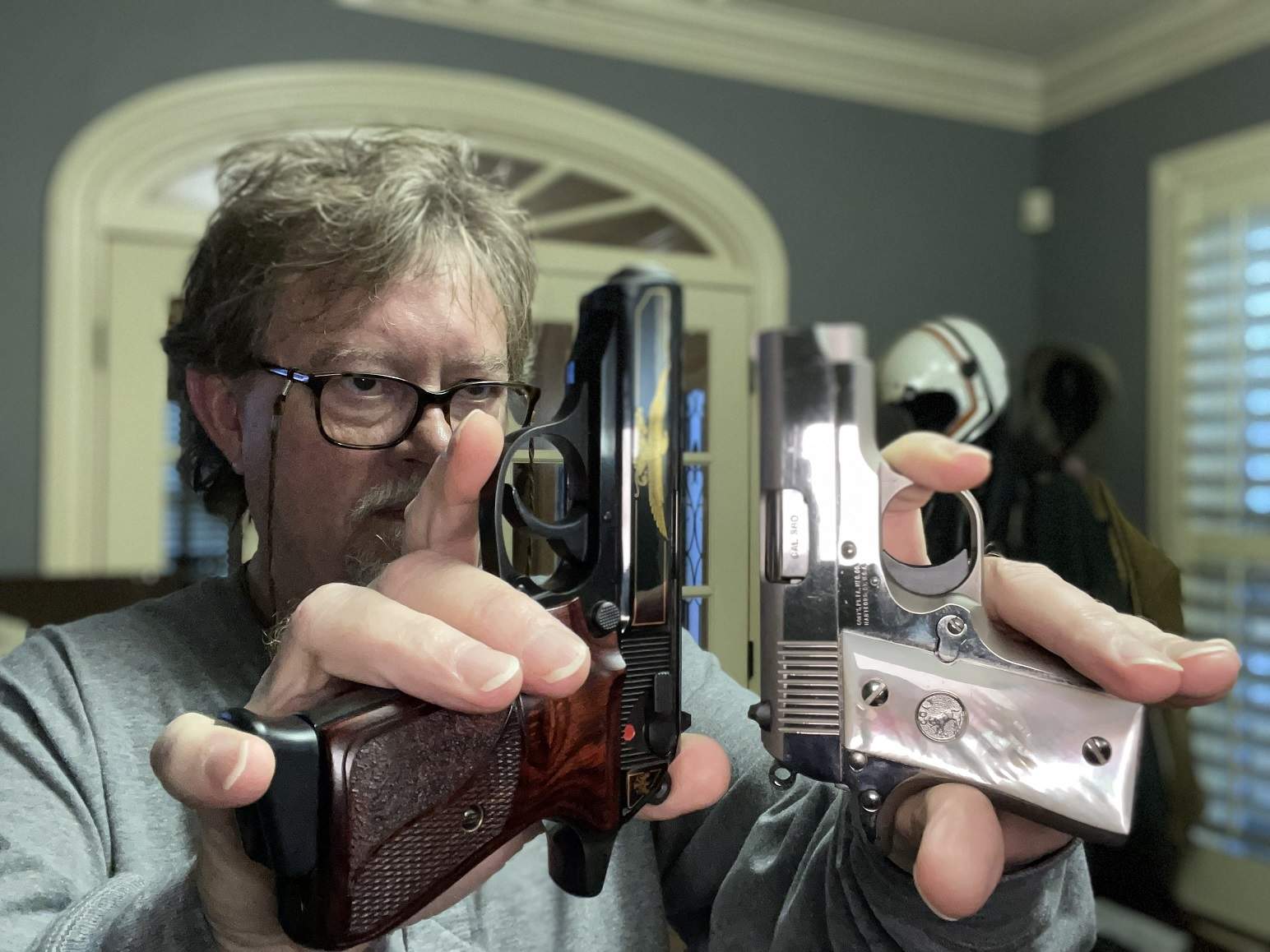 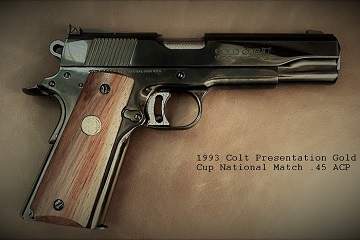