Only another gun enthusiast could understand the passion that can overtake you when that one gun comes along. Oh boy! It can take you by surprise, as in my case with the third model K-22 Masterpiece. Prior to this, I had only one .22 caliber handgun in my collection. It's that old 1961 Colt Scout that my brother gave to me years ago.

And then quite by accident...

I bought one of these guns. Then two. Then Three. Then four. "Why would you pay that much for a 68 year-old gun, when you can buy a new one for a third less?", my friend asked. My friend was privy to my recent purchase of three of these revolvers from the 1950s as Christmas gifts to my son and two son-in-laws (ages 35 to 39). My short answer to him was that I hoped they would develop an interest and appreciation for the historical aspects of the guns.

It was my friend's curiosity, coupled with my recently developed obsession over these old guns that prompted me to write about them. Well, this brief blog post is not just about the K-22 Masterpiece third model target revolvers, but about the appeal of an old gun versus a new one. 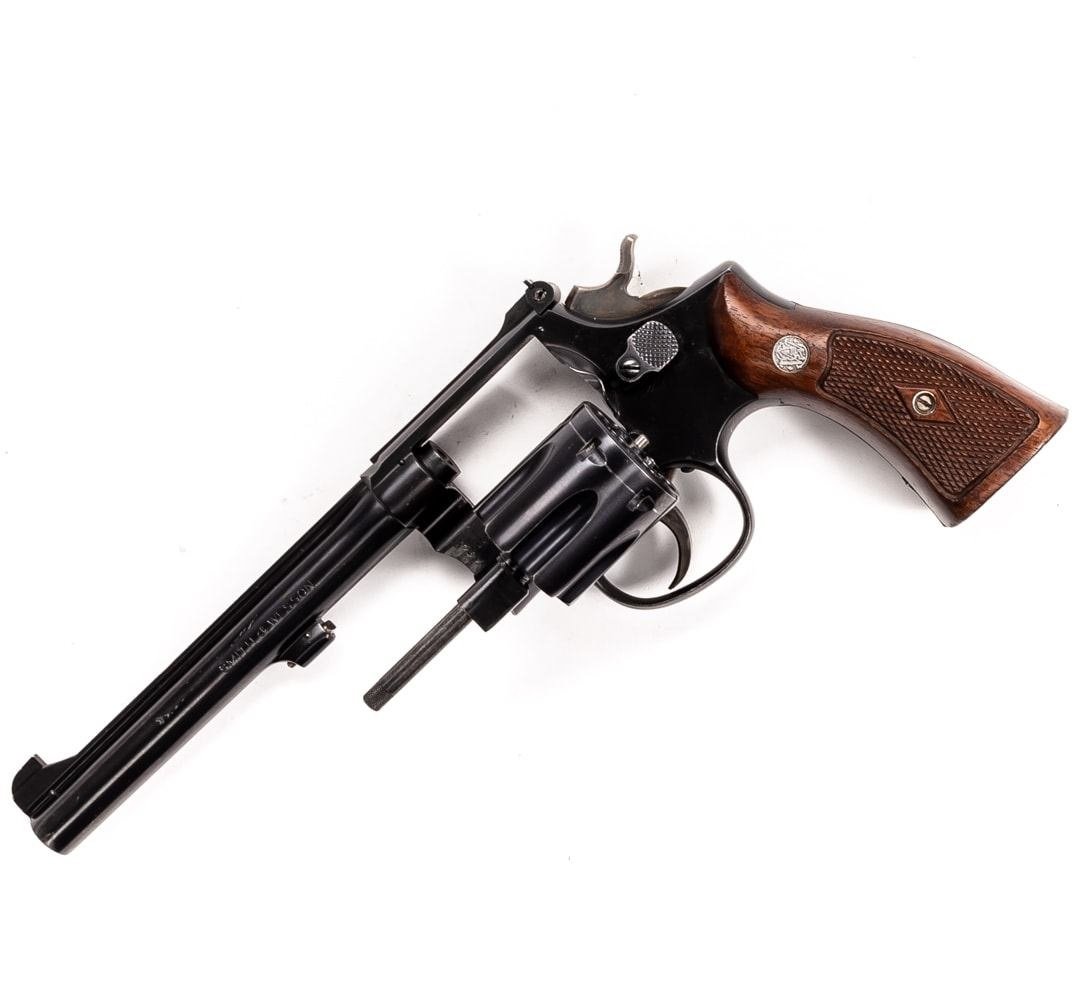 An Old Gun vs a New Gun

Does an old gun shoot better than a new one? Is it more accurate? I can't really answer those two questions because I haven't bought a new gun since those Remington RM380 Executive Model pistols I gave to the men for Christmas two or three years ago. Some guns shoot better and are more accurate than others, whether they are new or old.

So, what's the appeal of an old gun? How does it differ from a new one? These third model guns were made from 1946 to 1957. Smith & Wesson had just moved in to their new building in 1945 as the Second World War was ending. The facility was state of the art for it's time. It was a time when highly trained and skilled people had more to do with making the guns than machines. Gun parts were made by forging them before manufacturing processes changed and gave way to machining them.

This 1953 gun is what is often referred to as a 5-Screw gun. In 1955, the company dropped the 5th screw that would have been on the upper rear frame, kind of between the sight screw and cylinder. Was that action taken to improve the gun? No, my gut tells me it was simply a cost saving measure. Then again in 1961, the company dropped the 4th screw, which was located on the face of the trigger guard. Was that done to improve the performance of the gun? Again, it had to be merely a cost-saving measure.

The first K-22 Masterpiece I acquired was made in 1957 and is a 4-Screw gun. I went into more detail about 5-Screw, 4-Screw and even 3-Screw changes on that blog post so I won't rehash them here.

When I began thinking about new versus old guns, I realized that the newest gun in my collection is that 2008 Special Edition Walther PPK/S, which was made by Smith & Wesson in Maine. After it, the next newest gun would be the 1993 Presentation Gold Cup. So see, I like newer guns as well. 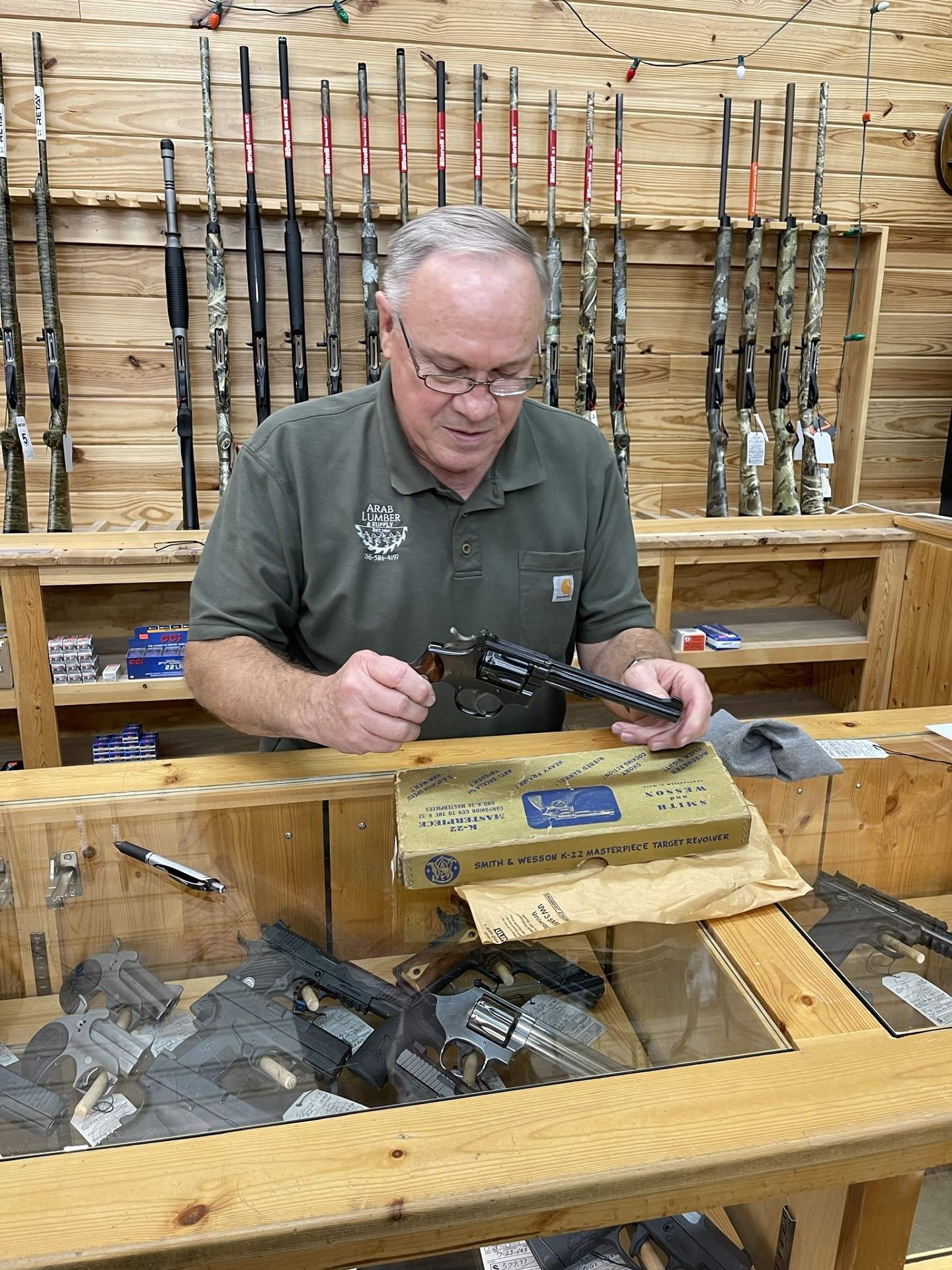 Benny, my FFL Inspecting the 1953 Gun

For a collector, when you make a trip to the gun store and walk out with a 68 year-old gun, it's a good day! As my friend and I inspected the serial numbers in the different locations on the gun, we discussed the fact that the serial number was also stamped on the inside of the grip. This was done because the wooden grips were hand-fitted to the firearm.

Forgive me for saying "they don't make them like that anymore." But they don't. They can't.

Can you imagine wood grips being hand-fitted to a firearm today? That would only happen in a Custom Shop. But that was the norm back when these factory production-line third models were made. And that my friends, is one of the reasons I love the third model version of this gun.

Disclaimer: This blog post is being written by a guy that owns a 1997 Harley-Davidson Heritage Springer (FLSTS, which was designed based on the 1948 Panhead), and is disappointed that his bike has only one grease fitting. 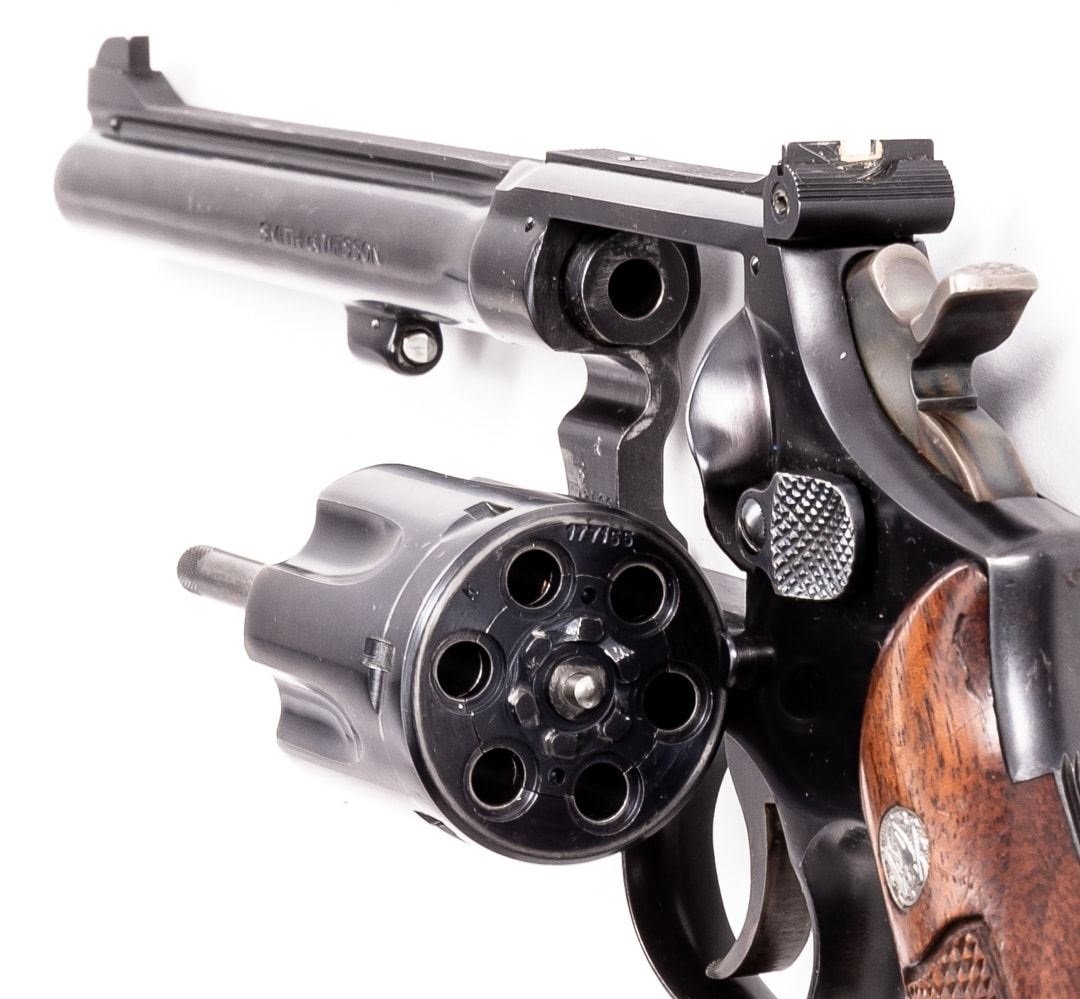 Have you ever wondered what the big hullabaloo is about a Pre-64 Winchester? I'll tell you. In 1964 Winchester began using cheaper materials and processes, like CNC machining to make their guns instead of the old fashioned hand-forged way. Why did Winchester and all of the other gun makers move to machines from people? They had to in order to compete and survive. The big change occurred because of time and money, not necessarily because it was better. It was cheaper and faster.

Just Because CNC Machining is Cheaper & Faster, is it Worse?

Don't get me wrong, I'm not against CNC machining. I've been told by Ron, a reader of my blog who was involved in CNC machining from its introduction to the manufacturing process, that most likely the quality of gun parts produced by a modern CNC machine are superior to the older handmade versions. I yield to his expertise. But that doesn't change the fact that in my mind, nothing says "I'm Proud To Be American" more than these old Smith & Wessons from the 1950s. My old Colts and my old Harley Davidson too.

"Almost everything in life has a good side and a bad side."

Imagine a time when the serial number was placed on all of the major parts of a gun because they were handmade specifically to go together. Then imagine a time when machines were so good at making the parts that it didn't matter anymore if they were interchanged.

The pride of ownership that comes with one of these third model guns, when I think of the craftsmen and work that went into making them, well it's just not the same with these new guns. I don't own any plastic guns. Heck, I don't even own a plastic holster. Okay, I realize I'm getting way off topic and my blood pressure is rising a little bit. Let me get back to the third model Masterpiece. 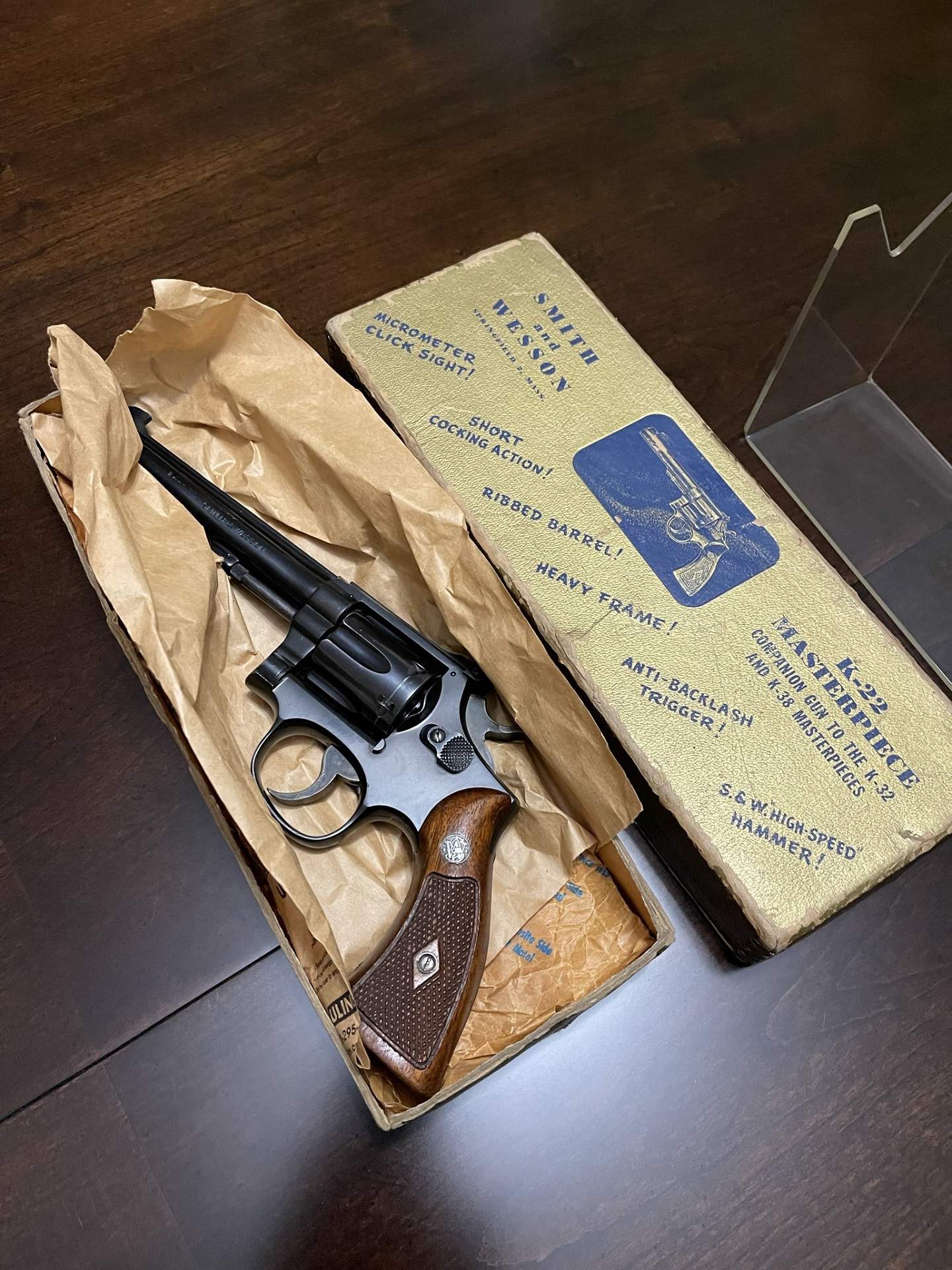 Seller's Description: Smith & Wesson K22 Masterpiece, a 6-shot revolver chambered in 22 LR and considered by many to be one of the finest target revolvers ever produced. According to the serial number (K177155), this model was manufactured in 1953. Despite its age, it remains in very good condition overall. There is a cylinder ring from use and slight bluing wear on the right side muzzle of the barrel and side and front edge on the lower part of the frame. The frame also has small scratches on the bottom in front of the grip, the left side of the barrel has marks and dings, and there are small marks on the bottom and edge of the grips. Comes with a gold factory box.

Of the four third model guns I recently bought, this was the second highest price paid. High side? Yes. Am I happy? Extremely.

In November 2021 when I was shopping for these third model guns, the going price seemed to be $1,000 to $1,500 for really good examples. And you know what? That should serve as a testament to these old guns, better than any customer review of a new one. In my quest, I made sure that each gun had all original matching parts, including the grips and original box.

Why oh why didn't I pay attention to this gun years ago? There are many reasons I suppose. It's a lowly .22 caliber. It doesn't lend itself to concealed carry or self-defense. No, wait a minute. Every gun can be used for self-defense. Right now, my plan is to learn more about the third model guns and their history.

You're never too old to learn something new. 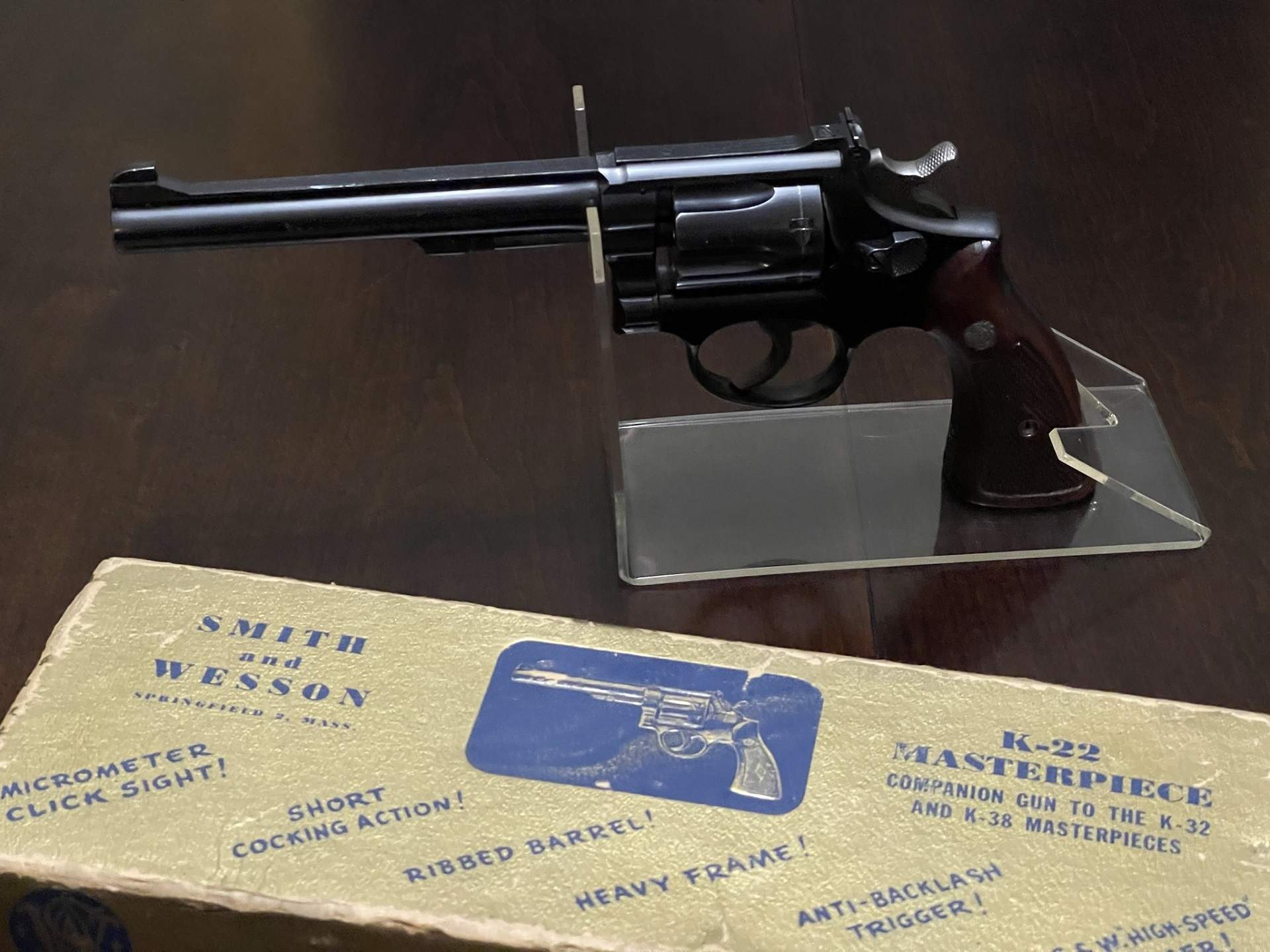 The Third Model, K-22 Masterpiece Guns are of the Highest Quality

"The wood grips on the new guns can't hold a candle to the old guns."

In the 1950s, everything was booming, including babies. Rock-n-Roll was emerging. Television sets were coming to living rooms. The first Corvettes and Thunderbirds rolled out of Detroit. Alaska and Hawaii were admitted as the 49th and 50th states. And Smith & Wesson was turning out these beautiful guns, my favorite .22 of all time.

All Four of these Guns...

All four of the third model K-22 examples I bought recently, lock up as tight as any new gun. There's no way of knowing how much use they've actually seen, but all have survived very well. And I have no doubt that they will last for many more years.

The Only Thing That Didn't Survive...

Only two of the guns had the original cleaning tools and screw driver that originally came with them. And Smith & Wesson's Guaranteed 1½" Groups at 50 Yards. I did not see that anywhere on their website with the new gun. 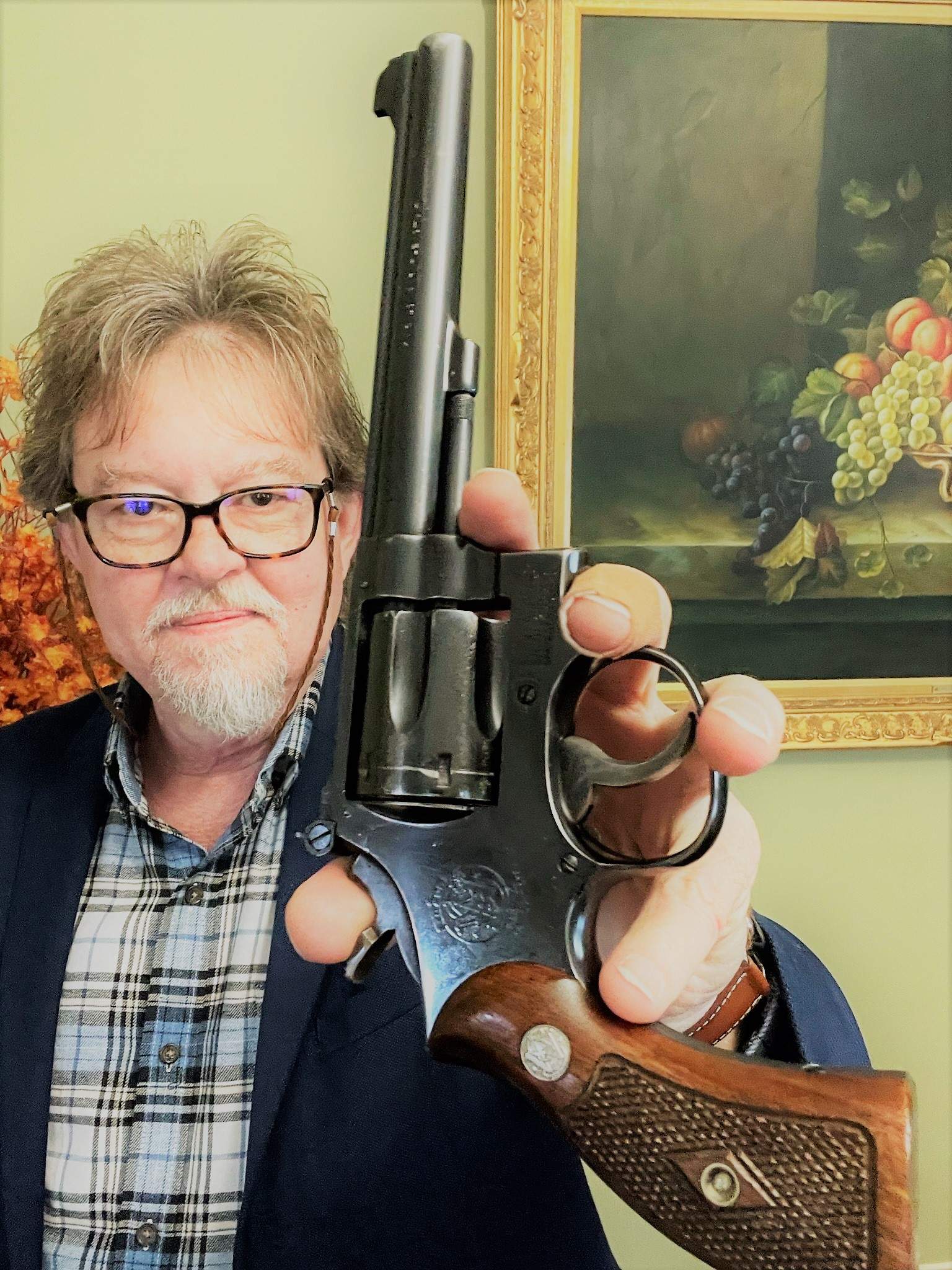 On a final note, if you have an interest in these guns, you can find the Serial Number Table for the Smith & Wesson Third Model K-22 Masterpiece here.

I love this old gun and would be happy to hear from anyone about this model. Message or post on my Facebook page.

By 1980 they were very reliable, easy to program and produced very high quality components, much more so than a good machinist on a manual machine. So as far as quality of the parts in a Colt revolver: the ones produced on modern CNC machines were most likely superior to the older hand made versions.

I love your web site and hope it continues to grow.

You made a statement that CNC machining had an impact on the possible quality or value of guns made after 1965. I have been in the CNC machining business since its introduction to the manufacturing industry. It really did not have much of an impact until the mid to late 70’s.

I love your web site and hope it continues to grow. 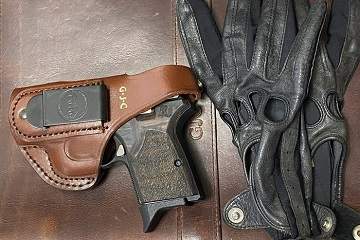 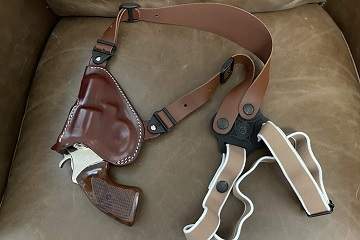