My interest in the K-22 Masterpiece began in November of this year. After researching these handguns, I decided to focus on the third model guns of the 1950s. While reading my Blue Book of Gun Values, I noted the Model 17-1 commanded a 25% premium. This piqued my interest since the 17-1 was from my birth year (a big deal to a lot of collectors).

Then one day as I'm browsing the auction website...

This Model 17-1 shows up with almost no bids. The gun had replacement Target Grips from a much later period. It didn't have the original box or cleaning tools. So I thought, I'm going to bid on this gun and see where it goes. I won the gun. 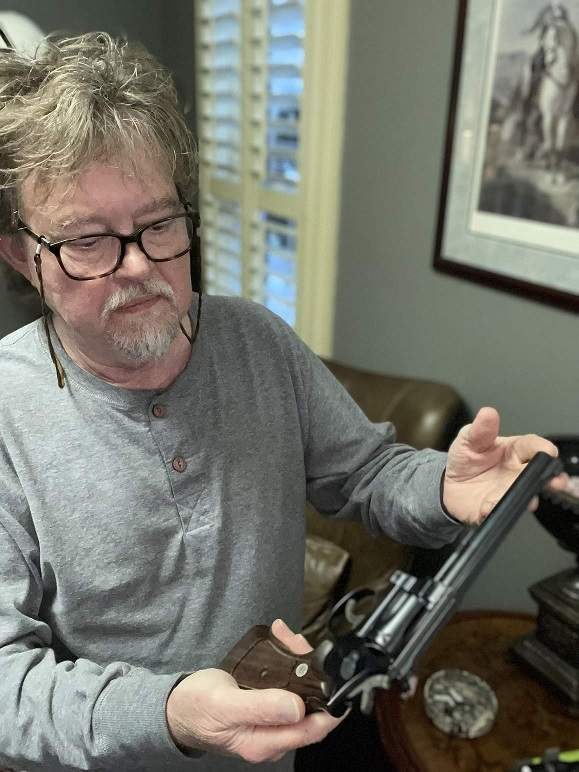 The Target Grips are much bulkier than the Magna Grips, which are my favorite. Still, this gun appealed to me. The fact that the 17-1 was one of the last 4-Screw guns was also a compelling reason to add one to my collection (like I needed an excuse). Just to be sure, I just stood up, walked over to the gun cabinet, opened the door, closed my eyes and ran my finger down the face of the trigger guard. Yep. It has a screw there. 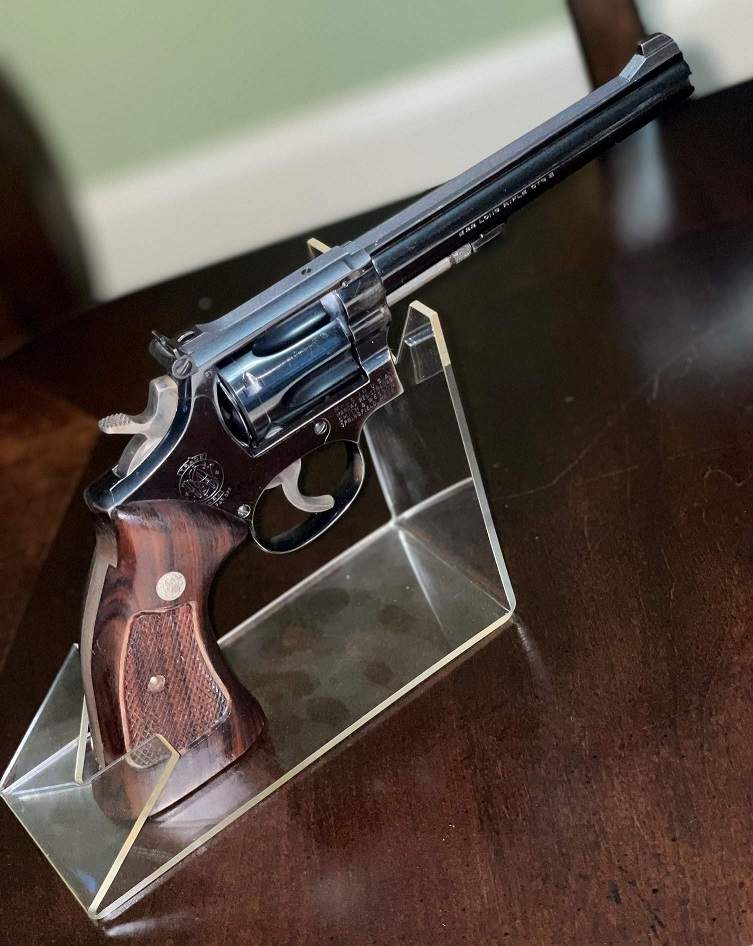 
Another factor that I believe adversely affected the market price of this gun, was the fact that it has import marks on it. The stampings are only visible upon close inspection. The presence of the markings may actually add to the historic importance of the gun in my mind. After obtaining a letter, I shall see.

Some say rules are made to be broken. Well, I broke one of my own rules when I bought this one. That $726 would have went a long way toward a nicer gun. By nicer, I simply mean one with less bluing loss, original grips and box. I have to routinely remind myself to always buy the best example of a model that you can and you won't be disappointed in the long run. It's true.

There is nothing I can do about the original grips and box being lost in the past. But those late period laminate grips are going to have to go. I may locate some period mother of pearl for it. I will follow up and add to this article in the future. Stay tuned! 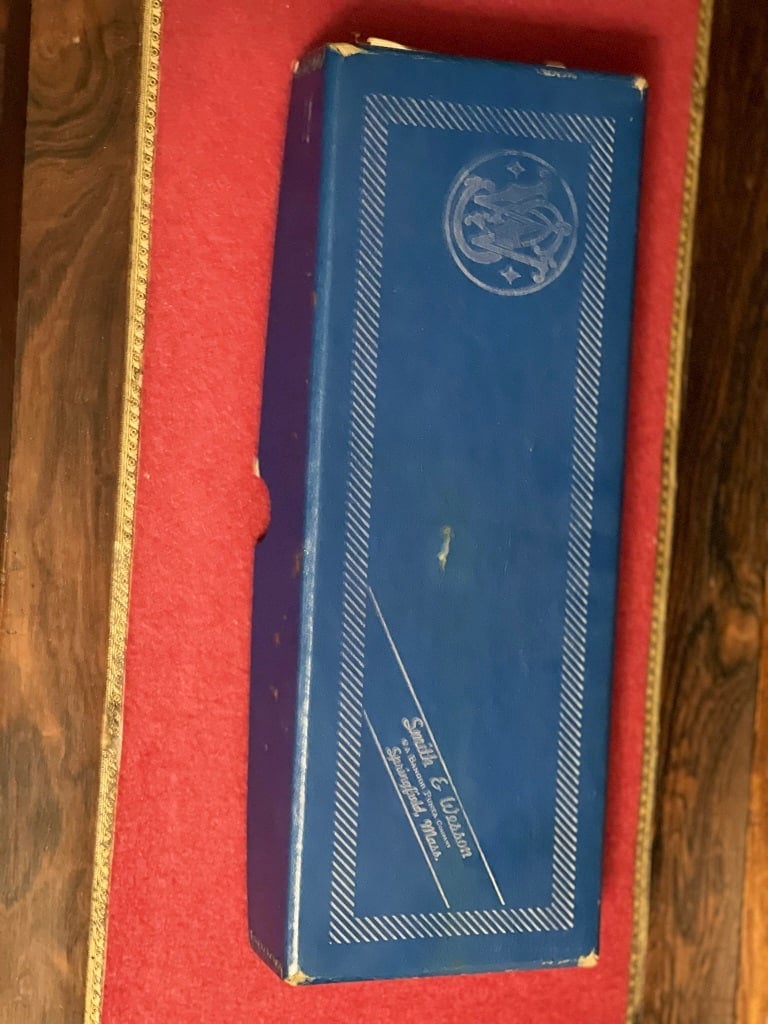 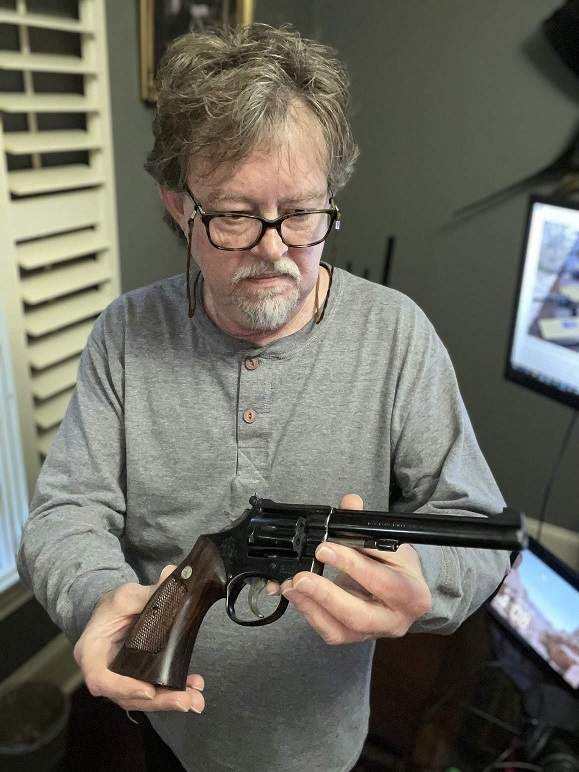 So what was the change that precipitated the dash one designation? The modification was changing the ejector rod from right hand to left hand thread to prevent the rod from backing out during recoil. The next change made by Smith & Wesson that transitioned the 17-1 to the 17-2, was the removal and deletion of that fourth screw on the face of the trigger guard. The fact that so little time elapsed between the two changes made the Model 17-1 the shortest-lived of all the model designations. Hence the rarity or scarcity and the 25% premium in pricing.

The Model 17-1 serial number should fall in this range...

It's obvious that the dash one change was an effort to improve the gun, while the dash two change was merely a production cost-saving measure. It's clear to me, that if the Dash-One improvement was considered significant enough, it might add value to the collectibility of that version. However, what is not entirely clear to me, is the 25% premium being based on scarcity or rarity.

When you look at the Serial Number Tables, you might conclude that the Model 17 No Dash gun would be equally as scarce. 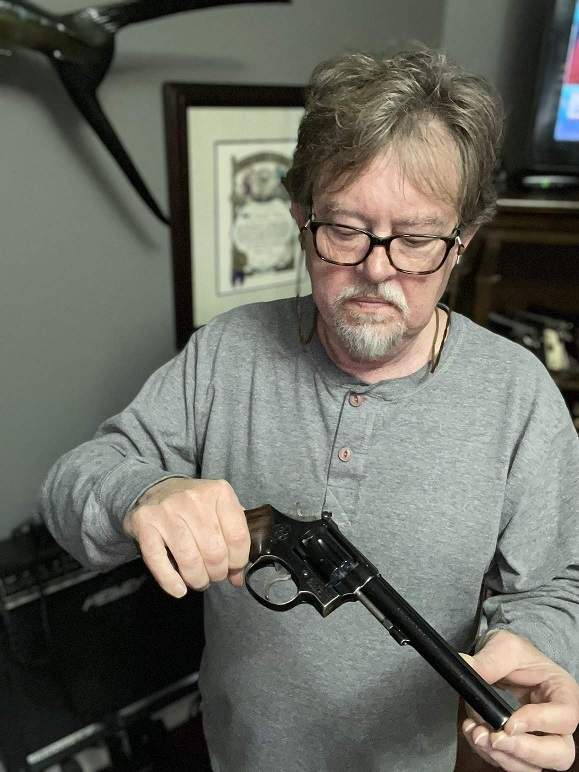 The gun I bought is very nice, but it has grips that don't belong on it and considerable bluing loss. In the last week, I've seen only one other 17-1 and it was ANIB for $1,950. With sales tax and shipping it would have cost $2,161. I would have been hesitant to shoot it and I can shoot this one all I want and not think twice. 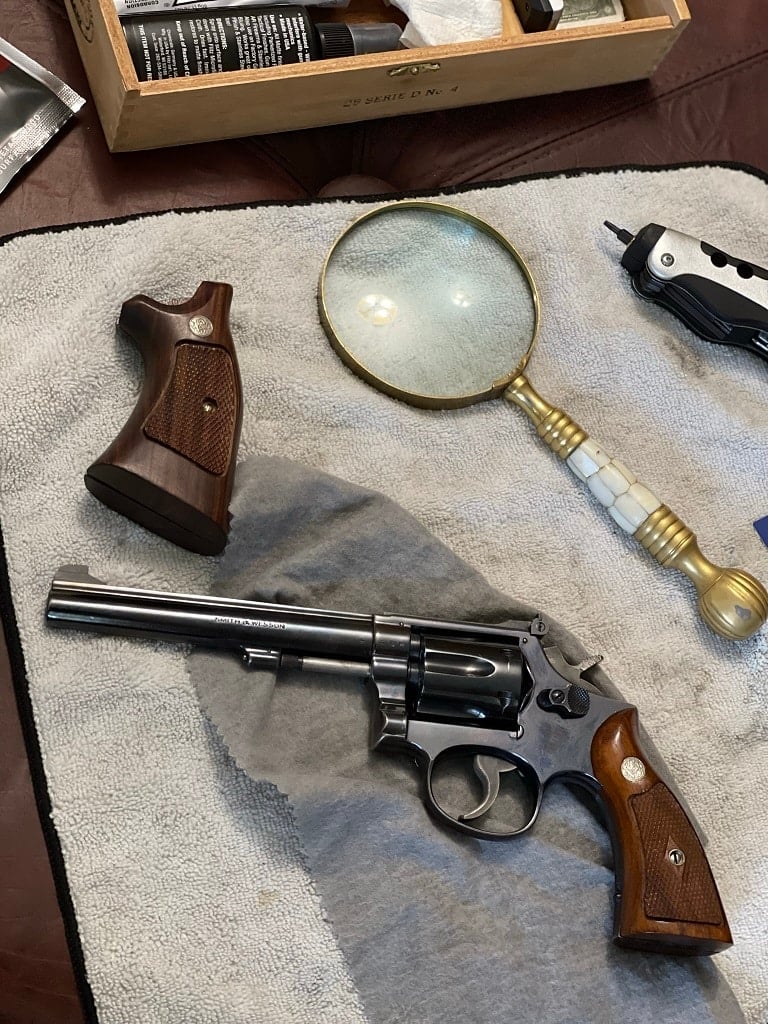 I just need those Walnut Diamond Magna or Mother of Pearl grips for it to wear while I'm staring at my birth-year gun in the cabinet.

Update 12/23/2021: Vintage mother of pearl grips are hard to find normally, but I located some rather quickly for this one. It's almost funny. Almost. I paid more for the grips than I paid for the gun. More photos posted below.

In all liklihood, I will soon be shopping for a holster for this one.

Four days may be a record for me locating and getting real mother of pearl grips for a vintage gun. Thank you Rogers Gun & Grips! I paid $857 for the grips, which is more than I paid for the gun. 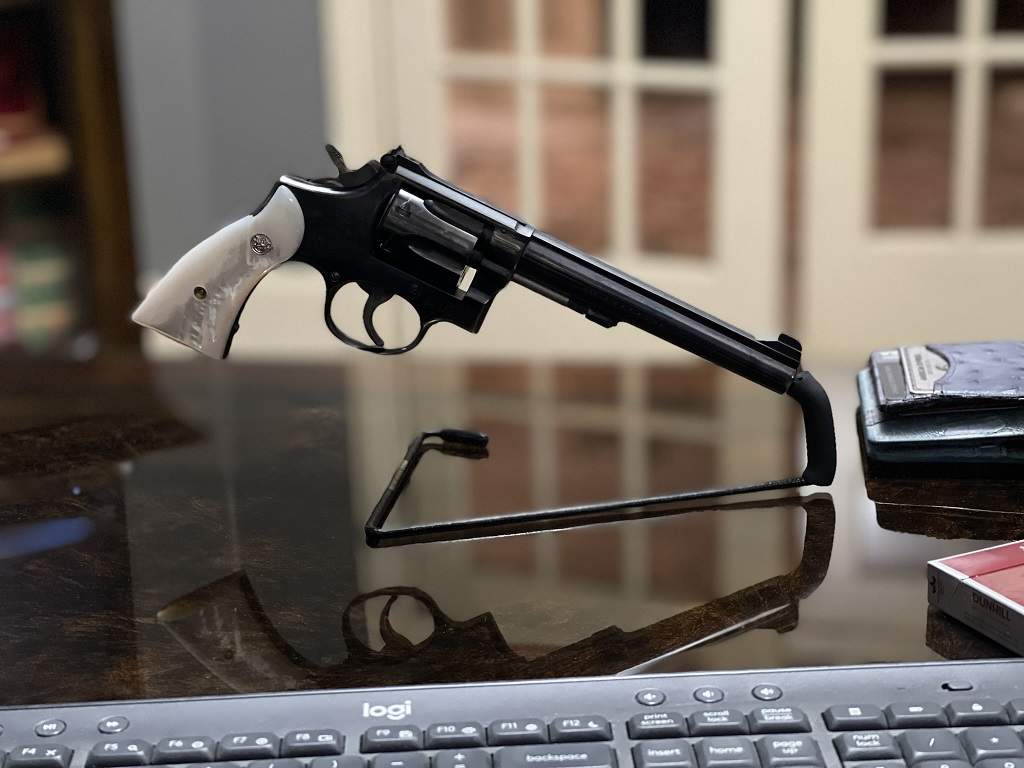 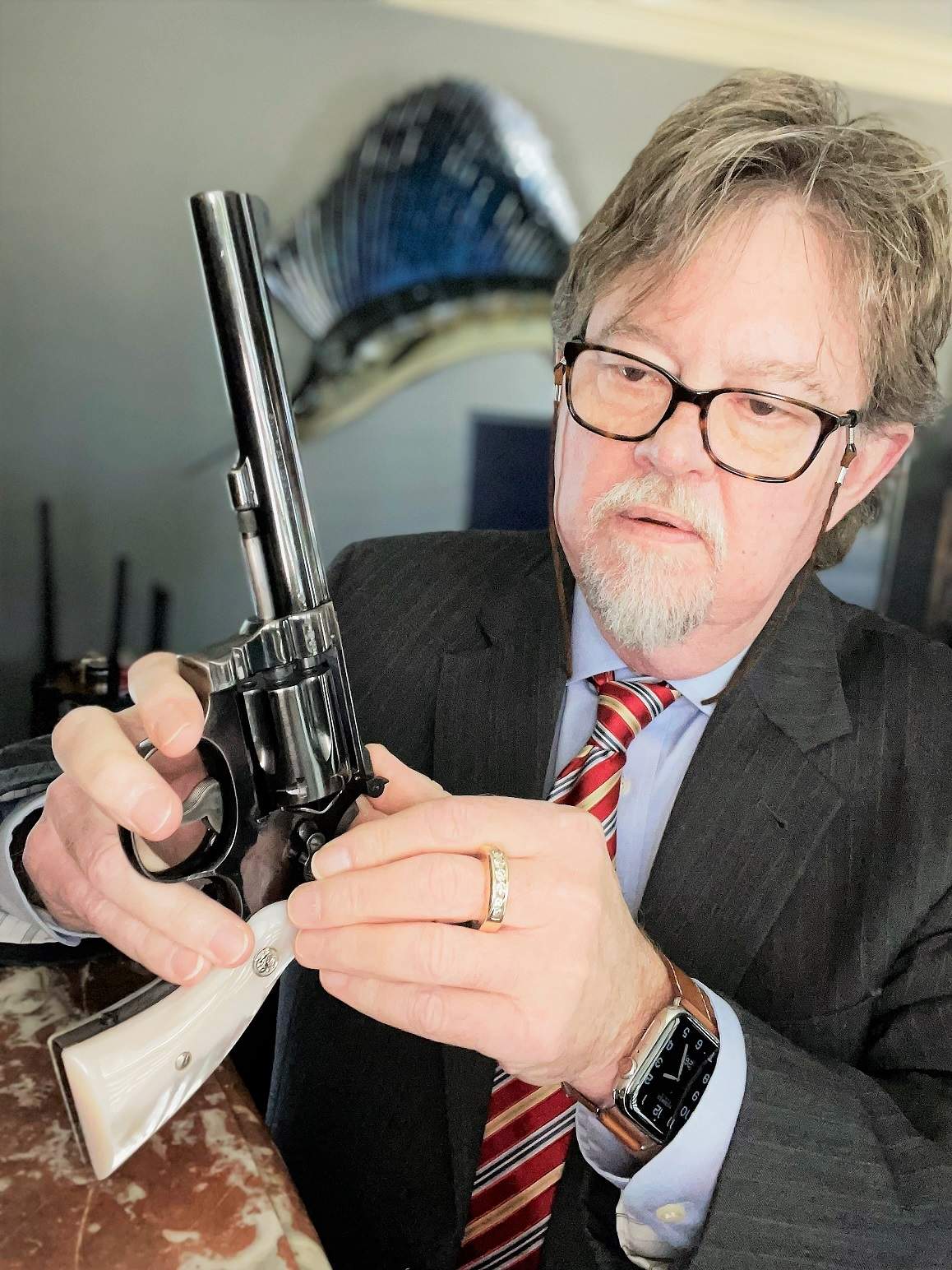