Taylor and Zack are showing off their skill with the Government Model .45 at the range. Zack's first 5 at center mass and Taylor's first 5 at the head using the 1974 gun, which is more than a dozen years older than either of them.

Colt Government Mk. IV Series 70 (1970–1983): Introduced the accurized Split Barrel Bushing (collet bushing). On our last visit to the indoor gun range, we put the Series 70 up against the Series 80 Gold Cup National Match. The contest was so close over-all that I thought it resulted in a toss-up. I'm pretty sure Zack preferred the Government Model because the first time he fired it, all five shots were touching the red dot at center mass. 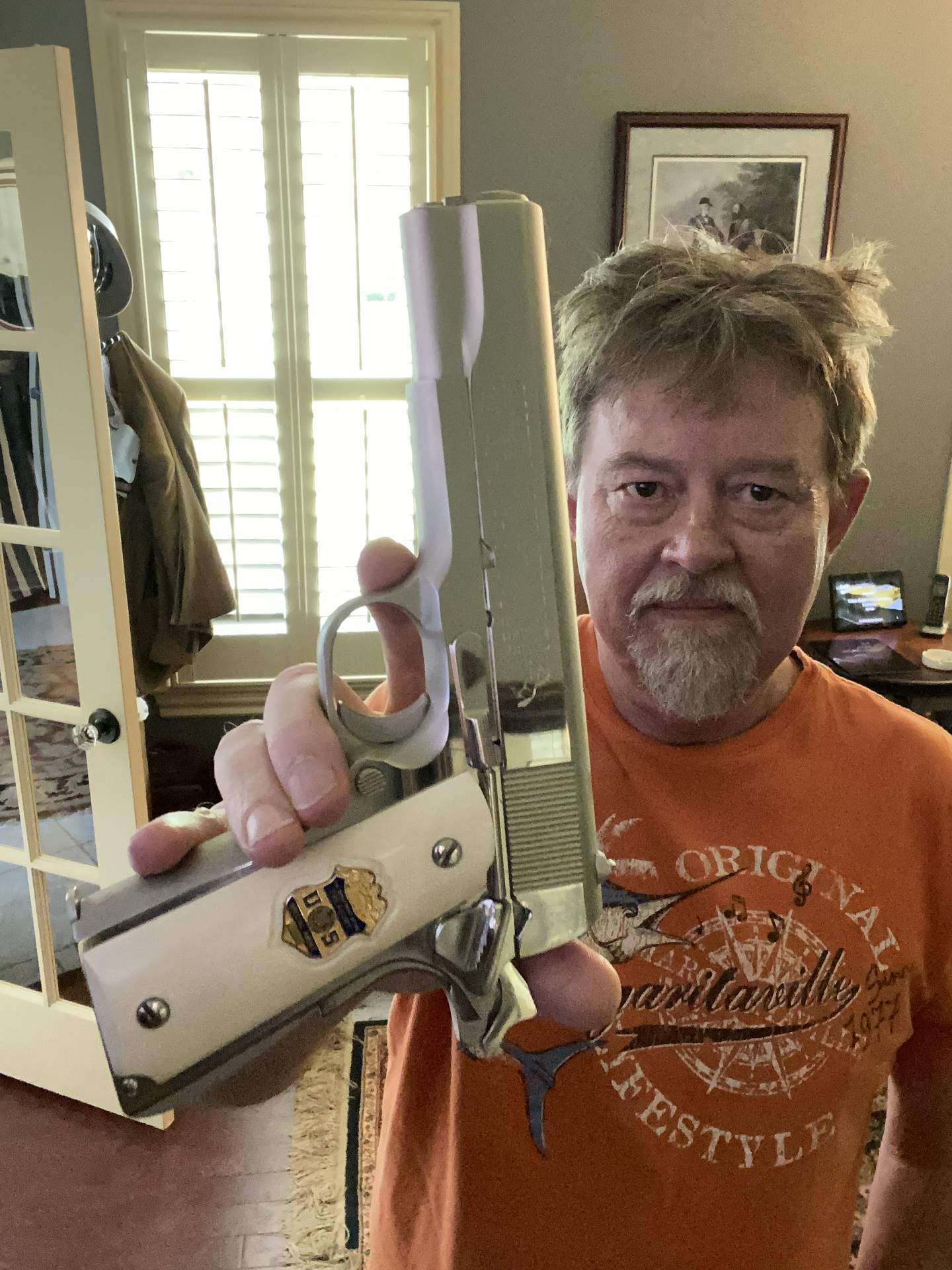 When it goes to the gun range, it wears the original wood stocks, but when we return home and after a really good cleaning, the Elephant Ivory with U.S. Treasury Department insignias that were special made for me by Nutmeg Sports back in 2005 go right back on.

Excerpt from the Colt Archive Letter:

This gun is my third most carried gun. The 70 Series Government Model is not picky about what ammo I feed it. In all these years I can't recall ever having a misfire or jam with it. If you are a fan of the .45 ACP cartridge or the Model 1911 pistol, you should have at least one example of the Colt Series 70 in your collection.

Want to learn what year your Colt Revolver was made? 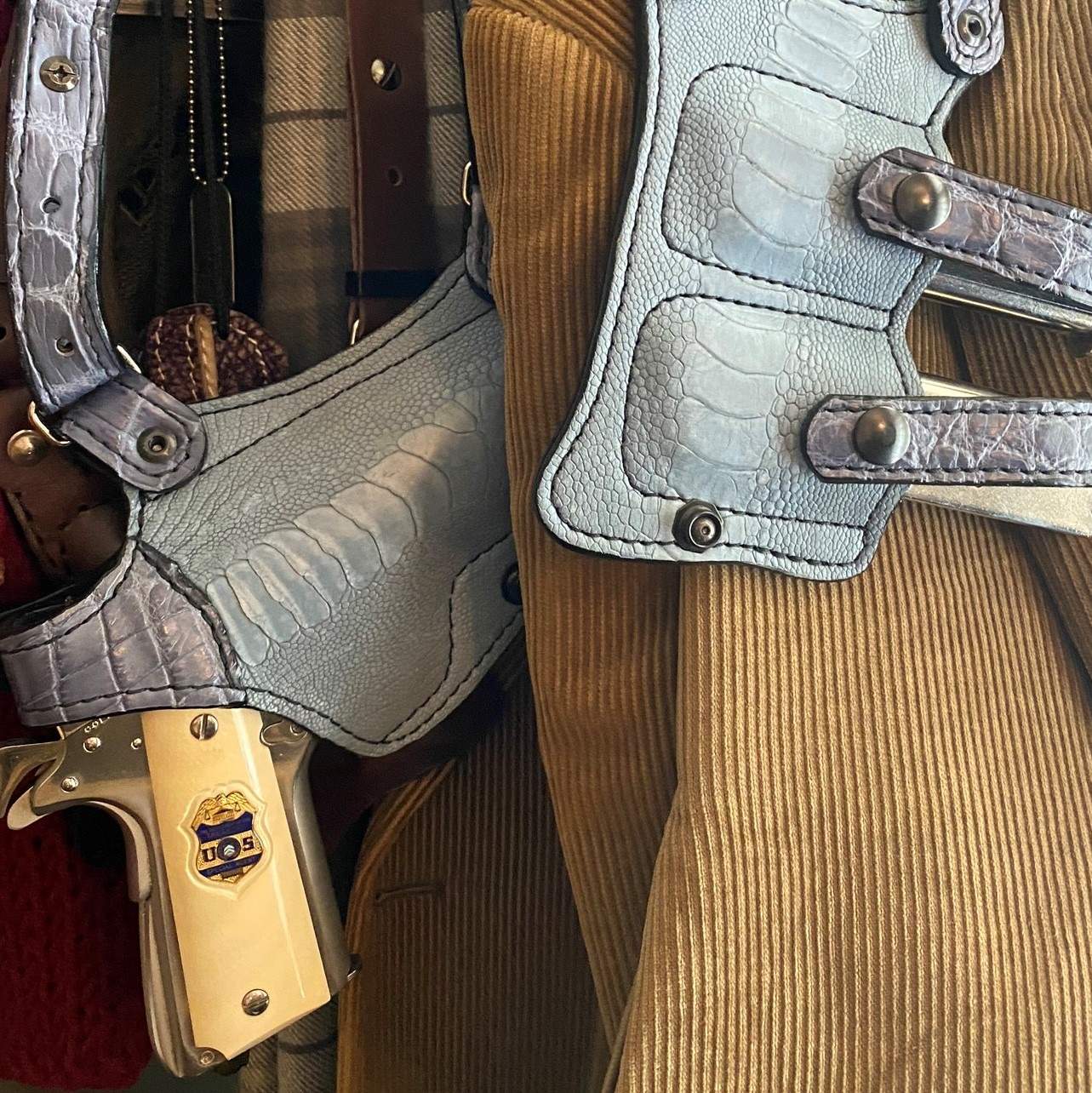 A Closer Look at the Government Model

Despite being challenged by newer and lighter weight pistol designs in .45 caliber, such as the Glock 21, the SIG Sauer P220, the Springfield XD and the Heckler & Koch USP, the M1911 shows no signs of decreasing popularity and continues to be widely present in various competitive matches such as those of USPSA, IDPA, IPSC, and Bullseye. Many of the shooters I talk to, prefer the Series 70 over the Series 80.

Introduced an internal firing pin safety and a new half-cock notch on the sear; pulling the trigger on these models while at half-cock will cause the hammer to drop. Models after 1988 returned to the solid barrel bushing due to concerns about breakages of collet bushings.

Browning's basic M1911 design has seen very little change throughout its production life.[7] The basic principle of the pistol is recoil operation. As the expanding combustion gases force the bullet down the barrel, they give reverse momentum to the slide and barrel which are locked together during this portion of the firing cycle. After the bullet has left the barrel, the slide and barrel continue rearward a short distance.

At this point, a link pivots the rear of the barrel down, out of locking recesses in the slide, and the barrel is stopped by making contact with the lower barrel lugs against the frame. As the slide continues rearward, a claw extractor pulls the spent casing from the firing chamber and an ejector strikes the rear of the case, pivoting it out and away from the pistol through the ejection port. The slide stops its rearward motion then, and is propelled forward again by the recoil spring to strip a fresh cartridge from the magazine and feed it into the firing chamber. At the forward end of its travel, the slide locks into the barrel and is ready to fire again. However, if the fired round was the last round in the magazine, the slide will lock in the rearward position, which notifies the shooter to reload by ejecting the empty magazine and inserting a loaded magazine, and facilitates (by being rearwards) reloading the chamber, which is accomplished by either pulling the slide back slightly and releasing, or by pushing down on the slide stop, which releases the slide to move forward under spring pressure, strip a fresh cartridge from the magazine and feed it into the firing chamber.

There are no fasteners of any type in the 1911 design, excepting the grip screws. The main components of the gun are held in place by the force of the main spring. The pistol can be "field stripped" by partially retracting the slide, removing the slide stop, and subsequently removing the barrel bushing. Full disassembly (and subsequent reassembly) of the pistol to its component parts can be accomplished using several manually removed components as tools to complete the disassembly.

Source: wikipedia.org
Back To Top