My Favorite Gun...
This Week

Colt had just begun producing the Officer's Model, which is basically a 1911 with the barrel shortened to 3.5 inches and a shortened grip frame, the previous year in 1985. I can't think of a better way, marketing-wise, to elevate the prestige of a newly developed model than to include it in such an important set with the greatest revolver of all time. 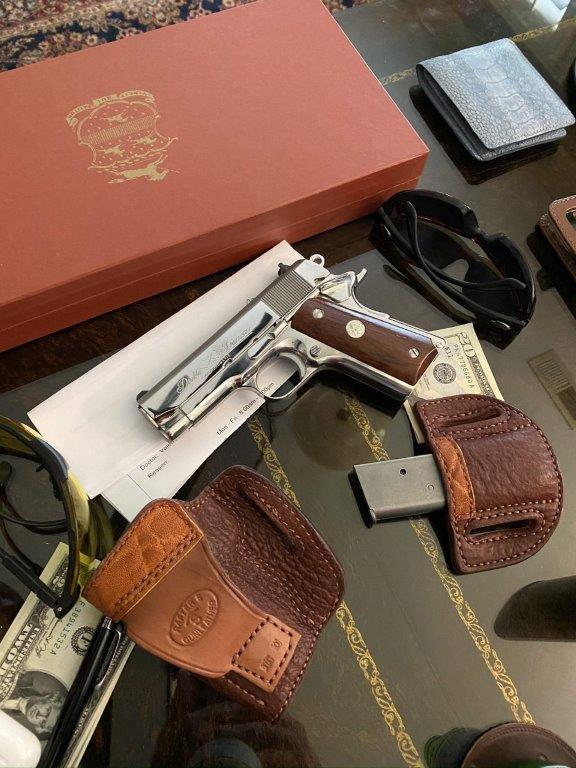 I have always admired this gun and everytime I saw one of these sets, the thought would run through my mind that I would really like to have one of these Officer's Models to carry. But it seemed absurd to use a gun from a commemorative set as a carry gun.

As luck would have it, I recently ran across this gun up for auction. At some point in its history, the gun was separated from the set. I realized it was my opportunity to own one without feeling guilty about using it!

Colt produced Commemorative Guns throughout the 1960s, 1970s and 1980s. Actually, Colt stopped designating guns as a "Colt Commemorative" in the mid 1980s and began using the terms Special or Limited Edition.

For a Colt Commemorative, Special Edition or Limited Edition gun to realize its highest value, the gun must be pristine, unfired and with no visible signs of handling. The gun must have the box, papers and whatever accoutrements were originally issued with it. Personally, I have no interest in this type of collecting. Remember my rule, no safe queens. 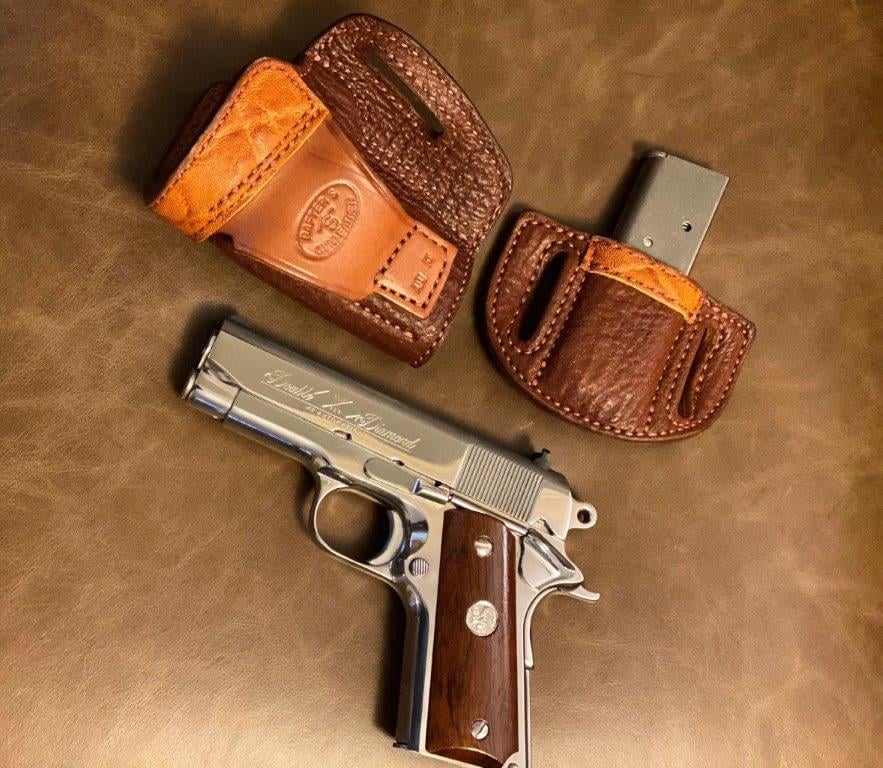 Double Diamond set as an Investment

How the Officers Model Came to Be

In 1975, Rock Island Arsenal developed a compact 1911 it called the "General Officer's Model Pistol" for issue to general officers of the US Army and Air Force, but the pistol was unavailable for sale to the general public. The old adage that "people want what they can't have" is so true. The idea of a more compact .45 for concealed carry caught on quickly. Soon, many gun manufacturers were jumping on the band wagon.

"After 40 years of buying guns, I bought this, my first purchase of a commemorative gun ever!"

In my cover photo, you can see the difference in the grip medallion of the Double Diamond and my Mustang. The DD medallion shows only the upper half of the horse and has 150 on it. Did you know you can buy factory and after-market medallions and grips on Amazon? 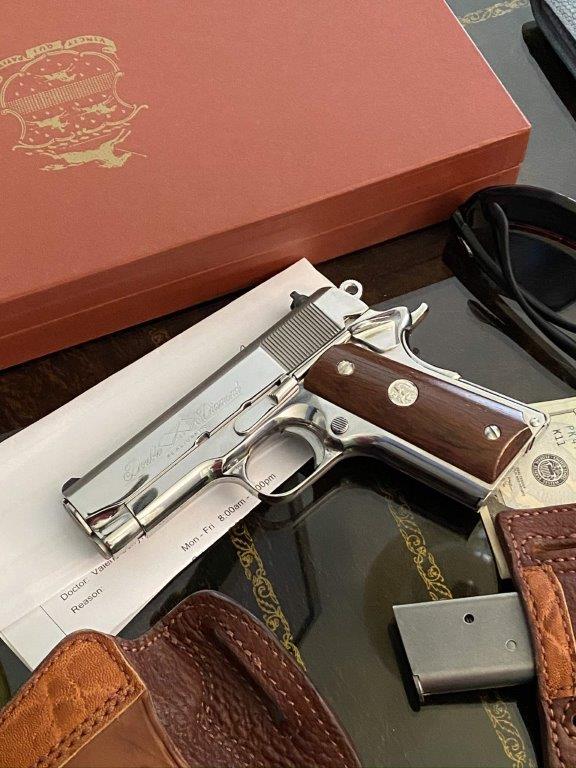 "The 41st Edition of the Blue Book of Gun Values only estimates fair market value of the Double Diamond sets and does not offer a value on the individual guns. I paid $2,100 at auction for this one in August 2020."

So, to answer the "What's it worth?" question... $2,100. Because that is what I was willing to pay. The purchase price included shipping, transfer fee and a credit card surcharge. I won the auction on Sunday and had possesion of the firearm on Wednesday.

The problem with that hypothesis is that, unlike old Porsches and Harley-Davidsons, in this case the individual out-of-production parts are likely to never be worth as much as the whole. In fact, I'm sure there are many collectors that will horse-laugh at my paying $2,100 for this gun. And that's alright by me, as long as they smile while they're doing it.

I'm very happy with this purchase, in fact I'm elated. I love this gun and I've carried it all week. Note: If anyone owns a Double Diamond set and would be willing to share a quality photo, please share it on my Facebook page and I will add it to this page so everyone can see exactly what I've been describing.

This gun has already made a trip to the indoor gun range. It performed well. After cleaning and oiling, the action feels much smoother and I'm excited and anticipating a return trip to the range to give it another workout.

Check out these holsters for the Colt Officer's Model!

As an Amazon Associate I earn from qualifying purchases.


My Final Word on this Gun

Ordinarily, I'm not a fan of stainless steel, but in this case I have to make an exception...


And one more time, ordinarily I'm not a fan of commemorative guns, but in this case I have to make another exception. So it is, with these exceptions, I find myself loving a gun that by all counts I shouldn't. On top of all this, I'm not a fan of gunmakers tampering with the 1911 to make something "new and improved" out of it.

"Have any of you other gun collectors ever ran across a gun that you loved, in spite of it being something you don't normally collect?"

Not owning the complete set and the fact that I've taken this gun to the range, is at least weird and at most a sacrilege. 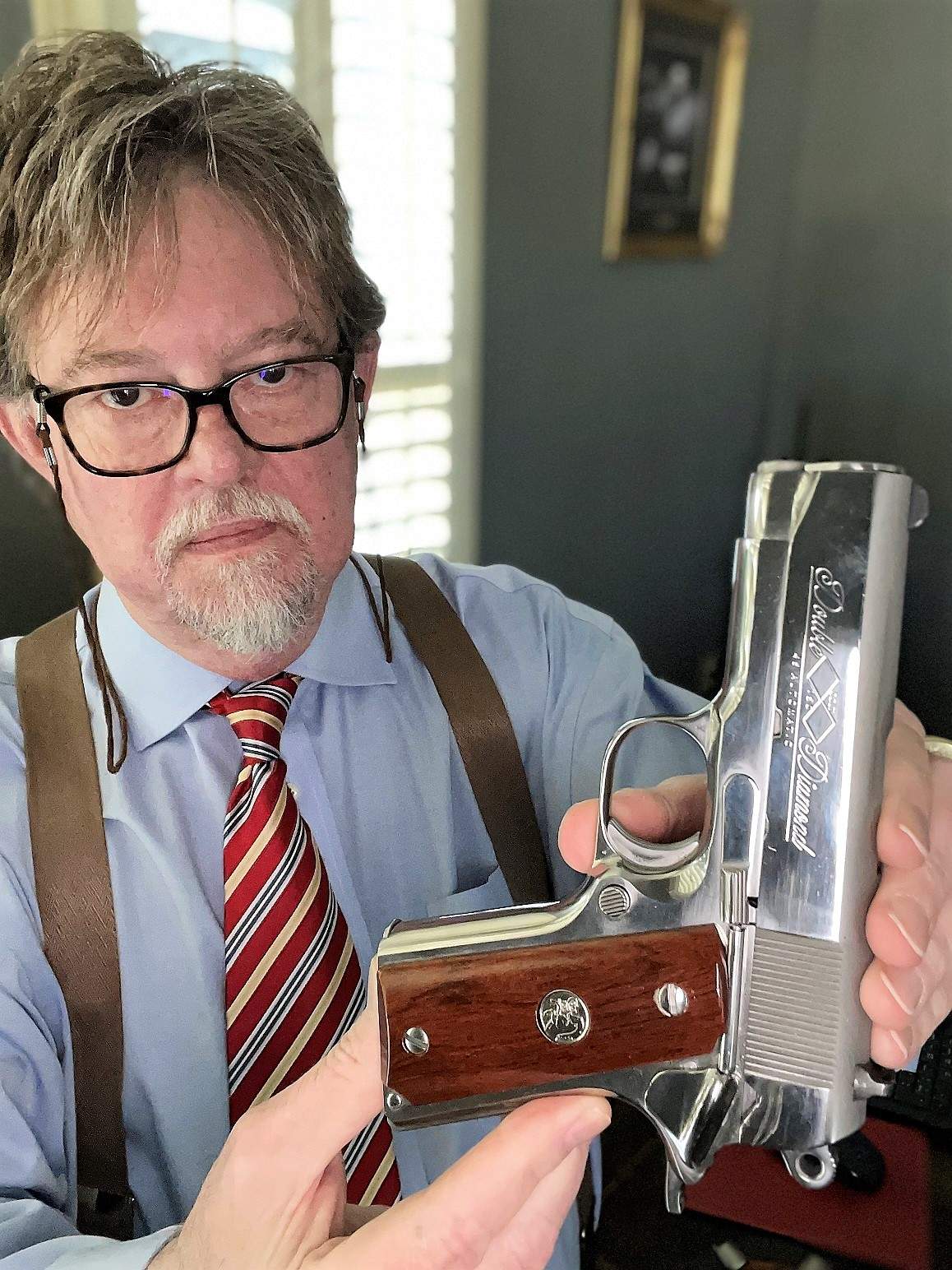 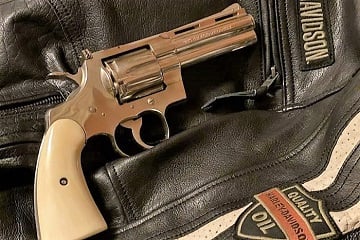