The Past, Present and Future of American Firearms

In 1718 a London lawyer called James Puckle patented an ingenious design for a gun that was much ahead of its times. And even though the Puckle gun didn’t gain the success James Puckle counted on, it still remained as one of the first designs of guns made for rapid firing, with a 25.4 mm caliber, 9-shot rounds and a flintlock revolving mechanism. And so had the history of rapid-firing firearms begun.

The 19th century brought a new revolution for the firearms manufacturing industry and a lot of important names along with it. Rapid-firing guns were produced intensively and so were the first semi-automatic firearms or volley guns. America was one of the world leaders in the firearm design and production industry, just as it is today. There were volley guns, double barreled pistols and even revolvers – all of them promising a bright future for this industry. During the Civil War, American gun production intensified even more, new features having been introduced. These referred mainly to the automatic loading and the single barrel but there still was one major improvement to be made: they were manually-operated.

When Richard Gatling invented the Gatling gun in 1861, it was clear that progress was in development. 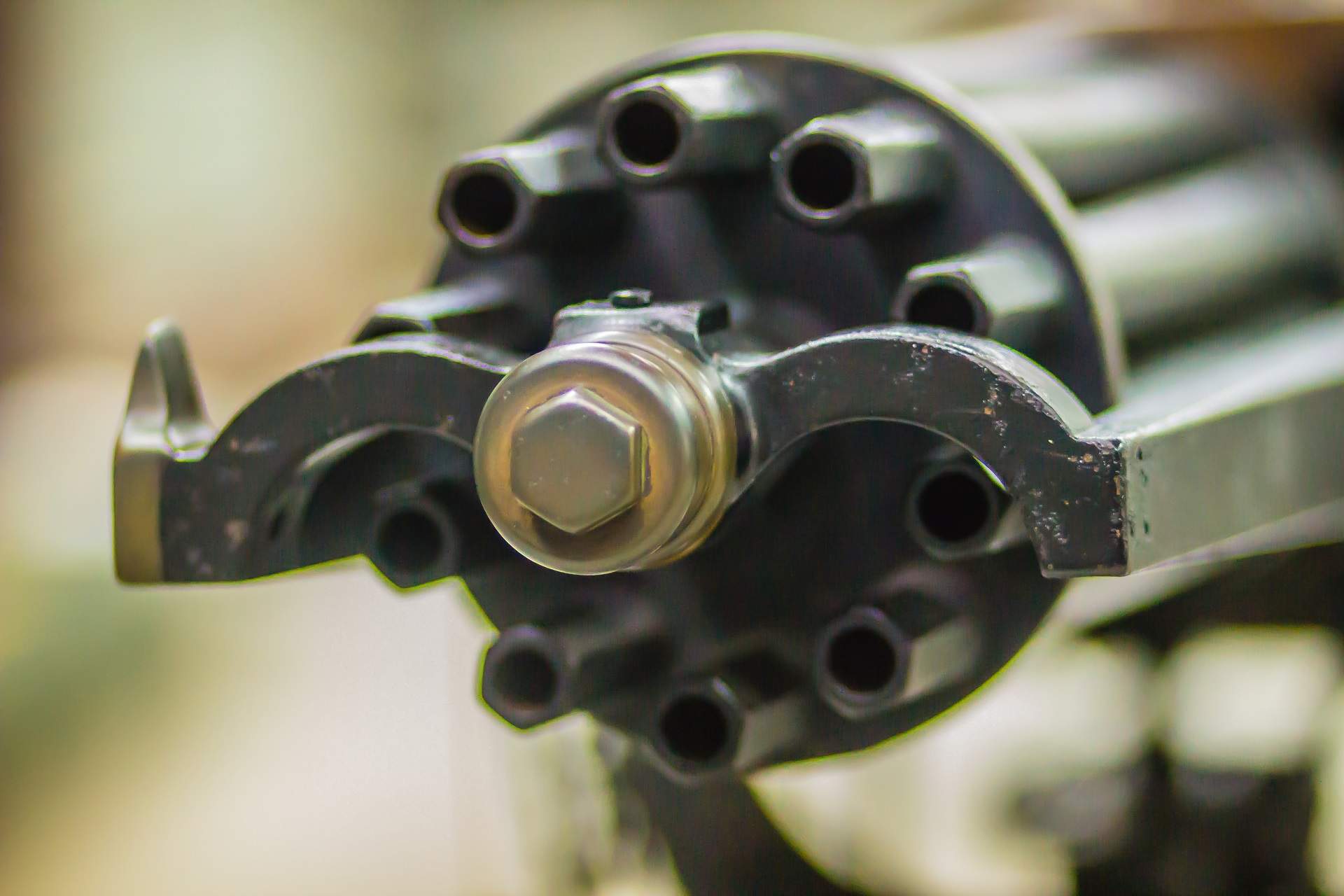 His invention offered high-speed firing and automatic machine loading of cartridges. The Gatling gun was used in the Civil War just as other famous firearms that have made history. The end of the 19th century found Richard Gatling already a renowned personality, his guns being sold to various armies and military forces. Even though it was replaced by the Maxim gun, the Gatling gun remained in the history of American firearms because of its many technological innovations. It was one of the first rapid-fire weapons that was so intensively used, having multiple barrels, being of light weight and considerably cheaper.

It would take 20 years for the Gatling gun to be substituted by a truly great invention that was the Maxim gun.

Invented by Hiram Maxim, it was one of the best rapid-fire guns of its time, using a recoil-operated system and an innovative water cooling system, reducing the possibility of overheating. The Maxim gun gained popularity quickly and it was used extensively during World War I. Without being too expensive, it had managed to surpass the Gatling gun, being of even lighter weight and much more easy to use.

If the Maxim gun was the highlight of the 19th century for the American firearms history, the 20th century brought a lot of changes and modern machine guns. New types appeared including submachine guns, larger-caliber machine guns, handguns and automatic pistols. After the First World War, the firearm industry was expanding like it never had done before. Designers were coming with incredible ideas and manufacturers were more than anxious to produce them. The name of John Browning was just one of the many names that have helped to the development of the firearm manufacturing industry, him being responsible for designing the famous Browning M2 in 1933 with a 12.7 mm caliber. This gun was used in the Second World War, setting the trend for advanced automatic rifles and modern machine guns.

Manufacturers were always looking to reduce the weight of the weapons they’ve created and to increase the handling. Forward-looking assault rifles started to be mass produced and flooded the American gun market. The military forces were especially enjoying the wide variety of firearms available, including the all-purpose machine guns that could be used by an entire army unit or police squad. This time, the water cooling mechanism has been replaced with a newer and certainly more advantageous system to prevent overheating, one that was using air cooling. Heavy machine guns were still in use and they still retained their reputation for being powerful assault weapons.

As the aircraft forces started to develop and take part in battles, the need for guns that could be used in the air was felt.

This is why producers have started to pay interest to producing light weight firearms, capable of being taken on helicopters or small planes. Automatic cannons, recoil-operated machine guns and the new improved multi-barrel weapons (based on the widely known Gatling gun design) were just a few of the weapons that served in special operations of the military and aircraft forces. Their extensive use proved to be more than beneficial and in short time the army had also incorporated modern machine pistols and smaller automatic firearms.

The Vietnam War was another opportunity for the American firearm manufacturing industry to develop, and manufacturers gladly took the chance they were given. Bearing all that in mind, they’ve started to produce new and improved machine guns for the Vietnam War. Though it may be hard to believe, one of the guns that were extensively used in Vietnam by the American forces was the grenade machine gun that was manually operated. Even so, there were other weapons including those that were automatic (grenade launchers, for example) used in Vietnam by the Americans.

Today, the machine gun industry has reached incredible proportions. Technological innovations are looking to make weapons as performant and indestructible as possible. From those that are electronically controlled to those that have incredible fire power, there are many discoveries to be made when it comes to future machine guns. Using multiple barrels and having the capacity to fire up to almost 4000 rounds per minute, the brand new models would amaze important personalities of the firearm industry, such as Richard Gatling, John Browning or Hiram Maxim.

If the early firearms were manually-operated using a hand crank, today’s models are quite different. They are lighter in weight, have advanced features and groundbreaking loading systems. They represent the future of the American firearms industry and they serve to the needs of the military, police and other special forces. Both the Navy and the Aircraft forces benefit from the constant developments in the firearm design and manufacturing. Who would have thought that were so many things to be discovered by scientific observation so that we can have the firearms existing today?